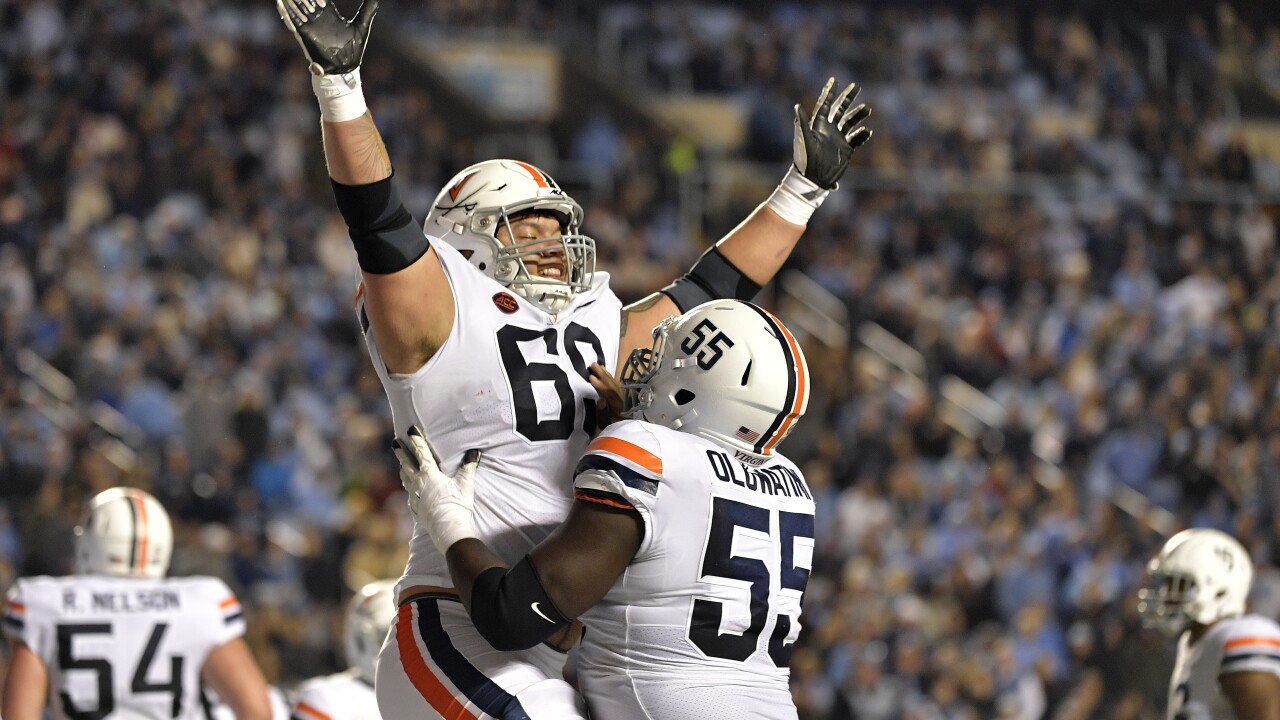 CHAPEL HILL, NORTH CAROLINA – NOVEMBER 02: during the second half of their game at Kenan Stadium on November 02, 2019 in Chapel Hill, North Carolina. Virginia won 38-31. (Photo by Grant Halverson/Getty Images)

Virginia took control of the game with three consecutive touchdowns and outscored the Tar Heels 21-14 in the second half, all coming in the third quarter. UVA was 5-for-5 in the redzone and finished with 517 yards of total offense to 539 for North Carolina.

HOW IT HAPPENED
After a North Carolina field goal, Virginia found the end zone as Perkins ran it in for a touchdown. The Cavaliers added a 21-yard field goal from Brian Delaney (Chantilly, Va.) to lead 10-7. The Tar Heels scored back-to-back touchdowns to lead 17-10. UVA responded with a touchdown pass to WR Hasise Dubois (Irvington, N.J.) with 13 seconds to go in the first half to tie the game 17-17.

Out of the break, UVA regained the lead when Perkins rushed for a 65-yard touchdown. The Cavaliers added to the lead as Perkins connected with TE Tanner Cowley (Manasquan, N.J.) for a touchdown. North Carolina cut it to 31-28, but Virginia responded just two minutes later as Perkins found TE Grant Misch (Sterling, Va.) for a touchdown. The Tar Heels scored with 43 seconds remaining in the third quarter to make it 38-31. Neither team scored in the fourth quarter.

NOTES
• UVA’s 38 points are the most scored in the series since tallying 56 in the 2004 meeting.
• UVA’s 65-yard rushing touchdown in the third quarter was the longest play from scrimmage this season for the Cavaliers. It was also the longest rush UNC has yielded in 2019.
• WR Terrell Jana finished with a career-high 13 catches. He surpassed his previous career high (7) in the first half. Jana hauled in nine catches in the first half. It is the first time a UVA player has had 10+ receptions in a game since the 2019 Belk Bowl when Olamide Zaccheaus had 12.
• QB Bryce Perkins passed current UVA wide receiver coach Marques Hagans (5,779) for No. 5 all-time at UVA in career total offense. Perkins now has 6,171.

Virginia returns home to host Georgia Tech on Saturday, Nov. 9 at 12:30 p.m. at Scott Stadium. The game will be broadcast on the ACC Regional Sports Networks.