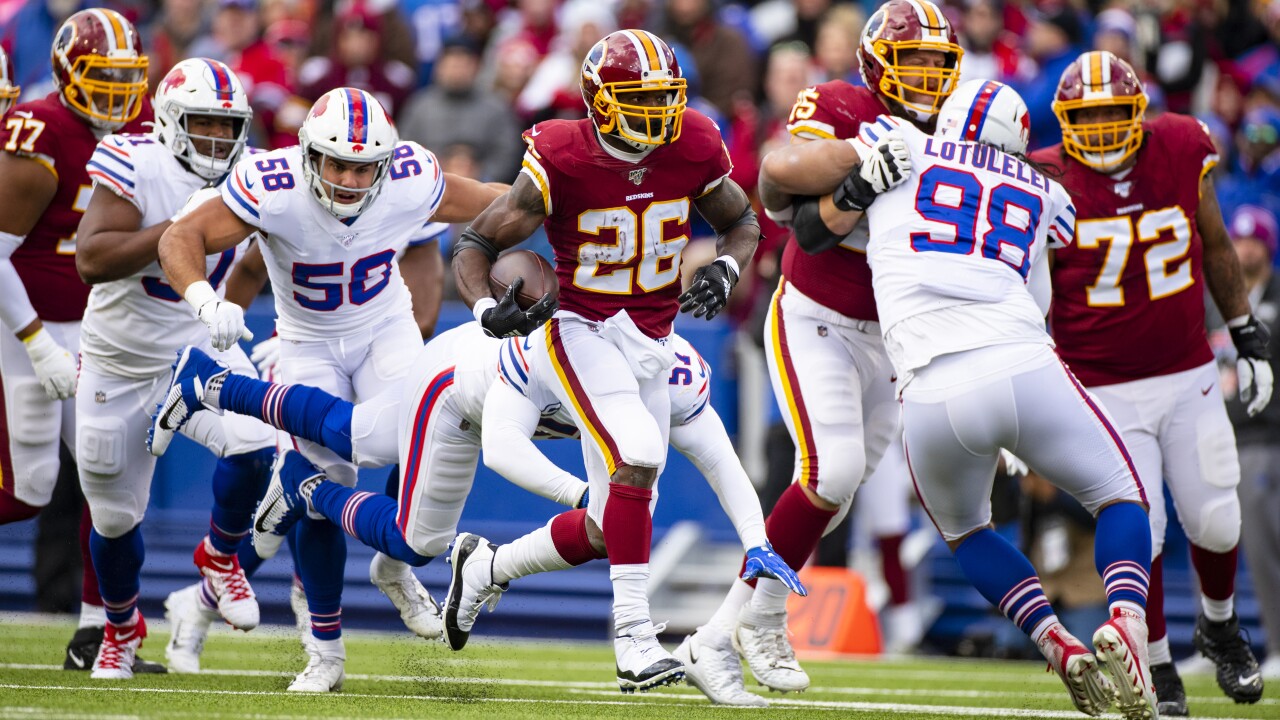 ORCHARD PARK, NY – NOVEMBER 03: Adrian Peterson #26 of the Washington Redskins runs with the ball during the second quarter against the Buffalo Bills at New Era Field on November 3, 2019 in Orchard Park, New York. (Photo by Brett Carlsen/Getty Images)

BUFFALO – For the third straight game, the Washington Redskins fail to score a single touchdown.

In rookie quarterback Dwayne Haskins’ first NFL start, all team could manage was a handful of field goals on the way to a 24-9 loss to the Buffalo Bills.

Haskins’ first drive as a starting QB was anticlimactic, as the Redskins went three-and-out their first possession of the game.

The Bills’ offense quickly found success, going 54 yards on eight plays that ended with a Josh Allen touchdown pass. He completed the pass to Cole Beasley, resulting in a 7-0 Buffalo lead.

Washington got their first points on the board at the start of the second quarter when Dustin Hopkins completed a 29-yard field goal. The Redskins trailed 10-3.

With 4:45 remaining in the second quarter, the Redskins’ defense stopped running back Frank Gore during the first three downs at Washington’s 1-yard line, but the Bills scored on fourth down to take a 17-3 lead.

ORCHARD PARK, NY – NOVEMBER 03: Adrian Peterson #26 of the Washington Redskins carries the ball for a first down. (Photo by Brett Carlsen/Getty Images)

Hopkins scored another field goal with 32 seconds remaining in the quarter to trail 17-6 at the half.

Heading into the locker room, running back Adrian Peterson had 101 rush yards, which is the third most during a first half in the NFL this season. His 123 yards from scrimmage through the first two quarters were the 5th most he’s had in his career.

The Redskins were the only team to score in the third quarter, but only managed a 39-yard field goal by Hopkins that decreased Washington’s deficit to eight points.

For most of the fourth quarter, Washington had a chance to get back in the game, but the Bills took that opportunity away with 2:21 remaining. Allen completed a touchdown pass to Devin Singletary, and Buffalo went on to win it 24-9.
Copyright 2020 Scripps Media, Inc. All rights reserved. This material may not be published, broadcast, rewritten, or redistributed.