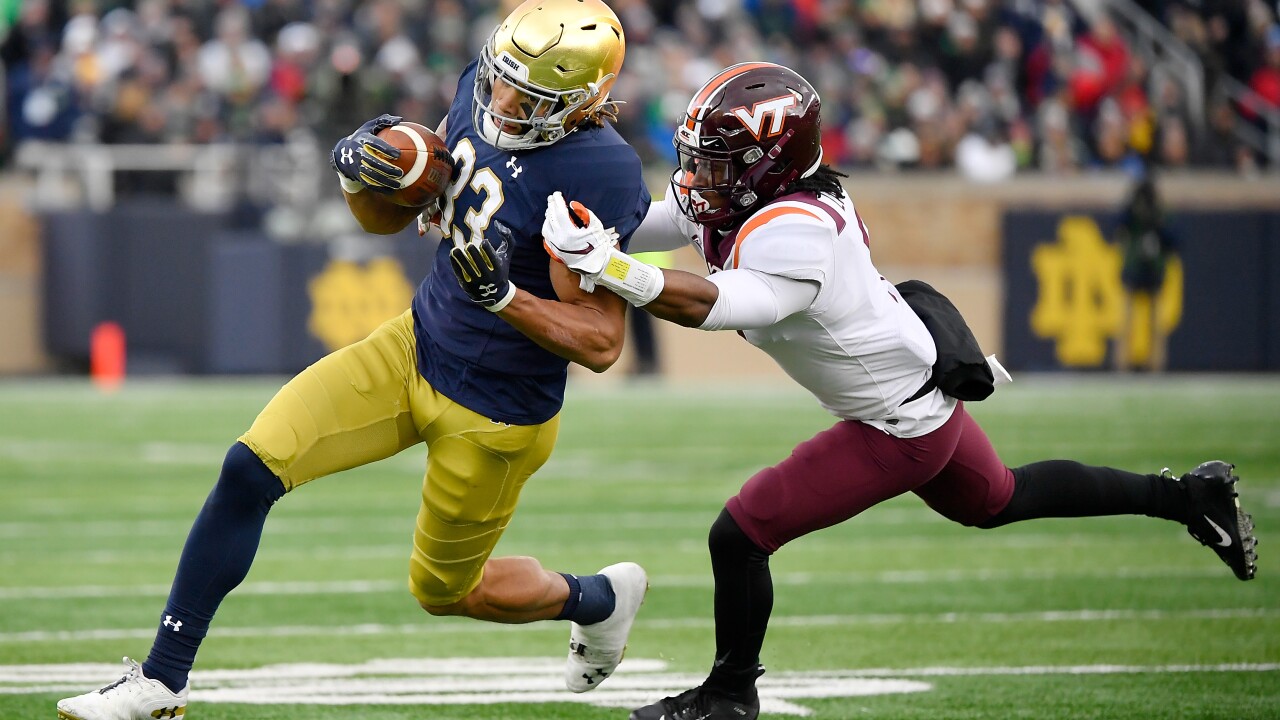 SOUTH BEND, INDIANA – NOVEMBER 02: Chase Claypool #83 of the Notre Dame Fighting Irish runs with the football in the first half against the Virginia Tech Hokies at Notre Dame Stadium on November 02, 2019 in South Bend, Indiana. (Photo by Quinn Harris/Getty Images)

SOUTH BEND, INDIANA – NOVEMBER 02: Divine Deablo #17 of the Virginia Tech Hokies reacts after his interception in the second half. (Photo by Quinn Harris/Getty Images)

SOUTH BEND, Ind. (HokieSports.com) – Notre Dame quarterback Ian Book scored on a 7-yard touchdown run with 29 seconds remaining and that carried the No. 16 Irish to a 21-20 nonconference victory over Virginia Tech on Saturday at Notre Dame Stadium.

With the loss, the Hokies fell to 5-3 overall on the season and saw their three-game winning streak come to an end. Notre Dame moved to 6-2 on the season.

Tech took a 20-14 lead after the second of two second-half field goals by Brian Johnson. Johnson had given the Hokies a 17-14 lead on a 44-yard field goal early in the third quarter, and Tech pushed it to 20-14 on his 25-yarder early in the fourth quarter.

But in the final three minutes, the Irish put together their best drive of the day. They marched 87 yards in 18 plays – converting on fourth down on two occasions – and scored on Book’s run. Jonathan Doerer’s extra point provided the final margin.

SOUTH BEND, INDIANA – NOVEMBER 02: Ian Book #12 of the Notre Dame Fighting Irish runs with the football in the second half. (Photo by Quinn Harris/Getty Images)

Tech had one last chance, but a Quincy Patterson pass was intercepted, and the Irish ran out the clock.

Making the first start of his career in place of an injured Hendon Hooker, Patterson struggled for much of the game, completing just 9 of 28 pass attempts for 139 yards, with a touchdown and an interception. He rushed for 77 yards on 19 carries, carrying much of the load on a day when the Hokies’ offense amassed just 240 yards.

Patterson threw an 8-yard touchdown pass to Damon Hazelton with 1:15 left in the first quarter. Tech’s other touchdown came on a 98-yard fumble return by safety Divine Deablo with 9 seconds remaining in the first half. Notre Dame was in great shape to take a two-touchdown lead at halftime, but the Hokies’ Rayshard Ashby forced a fumble by Notre Dame’s Jafar Armstrong, and Deablo scooped up the ball and went 98 yards for the score.

GAME NOTES
• The game marked just Tech’s third road loss to a ranked opponent in the past decade.

• John Parker Romo served as the Hokies’ punter against the Irish after normal starter Oscar Bradburn went down with an injury this past week.

The Hokies return home for their next game, as they take on Wake Forest on Saturday afternoon. The game kicks off at 3:30 p.m. can be seen on ESPN2 or the ACC Network. Tech is 4-1 against Wake since joining the ACC, but lost in the last meeting between the two programs – a 6-3 double-overtime affair in Winston-Salem in 2014.