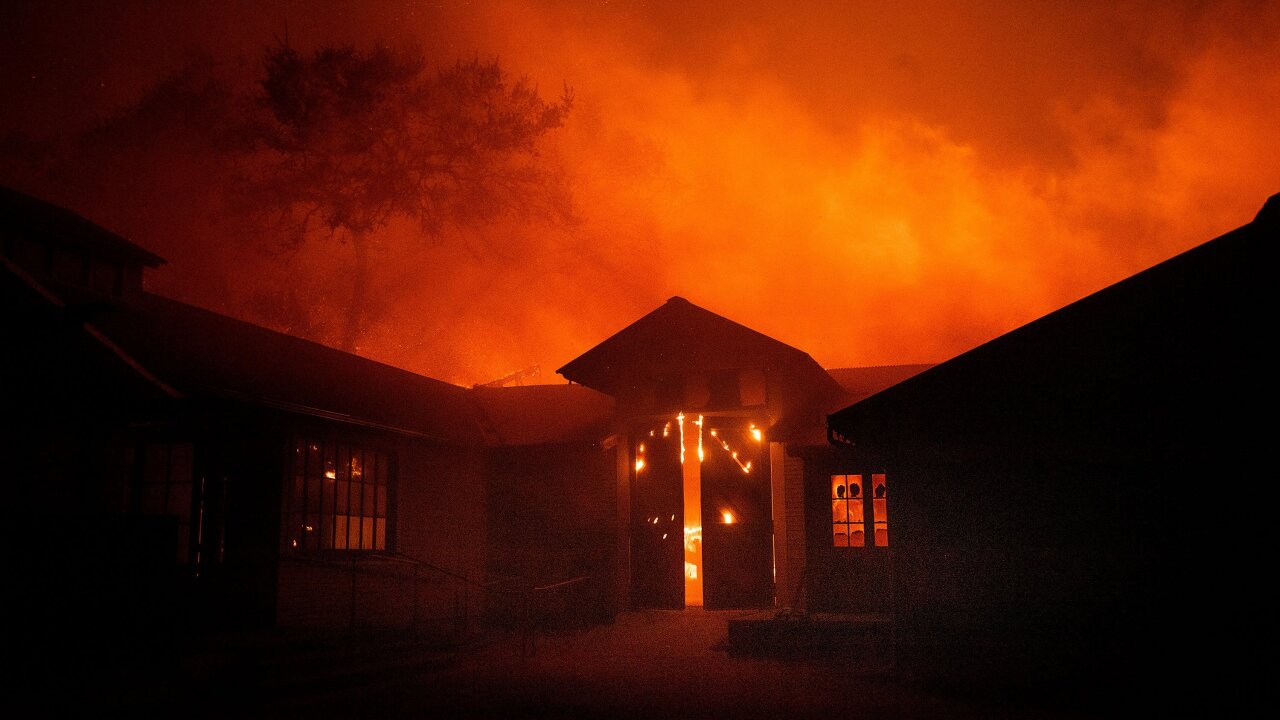 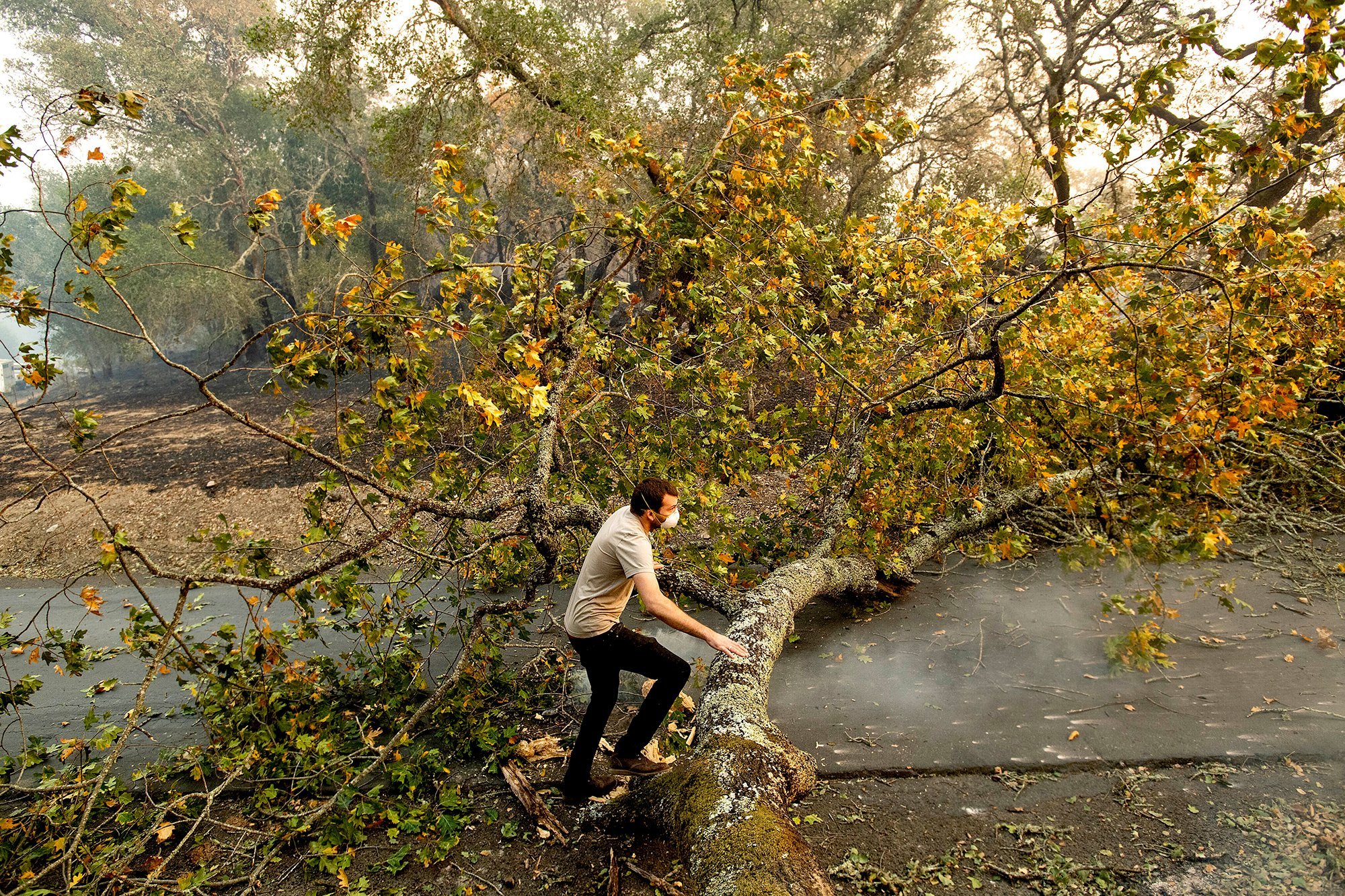 Spurred by historic winds, several wildfires burned in California on Monday, causing evacuations and power outages in parts of the state.

As the Kincade Fire and the Tick Fire burned, the Getty Fire broke out Monday morning on the west side of the 405 Freeway, the Los Angeles Fire Department said.

The area affected by the Getty Fire is known for its celebrities and high-value homes. NBA star LeBron James was among the many residents who evacuated.

Mandatory evacuations are in place for parts of the area. Students at Mount Saint Mary’s University, a private all-women’s Catholic school near UCLA, were among those evacuated, the university tweeted.

Ava Rutter, a student at MSMU, posted video of the Getty Fire turning the sky a hellish orange as she went to her car.

“This is a very dynamic fire and all residents west of the 405 Freeway and south of Sunset need to be vigilant and stay informed following LAFD,” the fire department said.

An active arson investigation is underway into the cause of the Getty Fire, Los Angeles Mayor Eric Garcetti said, though he said that it was not clear if someone intentionally set the fire.

Leslie Tuchman, 75, grabbed clothes, important papers and a list of contacts and chose to evacuate her Brentwood home after learning about the Getty Fire early Monday.

“I live alone. I thought I should’ve been packed already and I was mad at myself. I just didn’t know how fast and in what direction the fire could go,” Tuchman said in an interview at a city shelter at the Westwood Recreation Center in Los Angeles. “The brush was on fire on the 405 and I live five minutes from there.”

By Monday evening, about 500 customers were without power in parts of Bel Air, Westwood and Brentwood, down from 2,600 earlier in the day, the LA Department of Water and Power (LADWP) said.

The Getty Fire is just one of several ongoing fires across California amid a historic wind event. Firefighters were battling a 10-acre wildfire called the Oak Fire in Calabasas, according to the LA County Fire Department.

The brutal Kincade Fire gets worse, not better

Farther north, near the San Francisco Bay area, the Kincade Fire forced nearly 200,000 people out of their homes. And a power shut-off has left about a million people in the dark across Northern California.

The utility company behind the shut-off said some customers may remain without power until Thursday, following another possible planned outage later this week.

Two first responders have been hospitalized because of burns during the Kincade Fire, officials said. Cal Fire spokesman Jonathan Cox said one person suffered a serious burn injury and was flown to UC Davis Medical Center, and a second person was treated at a local hospital for a minor burn.

The fire’s flames were fanned by what Gov. Gavin Newsom called a “historic” wind event, adding “fire weather conditions are unprecedented due to the scale, scope, wind speed and dry fuel conditions.”

“We are deploying every resource available, and are coordinating with numerous agencies as we continue to respond to these fires,” he said Sunday in a statewide emergency declaration. “It is critical that people in evacuation zones heed the warnings from officials and first responders.”

The Kincade Fire in Sonoma County has scorched more than 74,000 acres and destroyed more than 100 structures, said Jonathan Cox, a spokesman for California Department of Forestry & fire Protection. The fire was threatening 90,000 more structures. It was 15% contained on Monday.

Driven by hurricane-force winds, the fire grew at a rate of one football field every three seconds when it first ignited Wednesday, CNN meteorologist Brandon Miller said.

Winds slowed Sunday night but were still strong, reaching up to 25 mph around Napa, Vacaville and Santa Rosa while gusts reached 35 mph. The highest gust across the county Sunday was 93 mph, forecasters said.

The Tick Fire, near Santa Clarita in the southern portion of the state, had destroyed 24 residences and damaged another 40, the Los Angeles County Fire Department said. That blaze was 82% contained on Monday.

In response to the winds, Pacific Gas & Electric (PG&E) shut off power to about 965,000 customers in northern portions of the state, said Mark Quinlan, PG&E’s incident commander.

Another wind event is expected Tuesday night and PG&E plans to shut off power again, impacting 240,000 to 600,000 customers, Quinlan said.

He said 68 community resource centers were open where customers could charge their devices, get water, dry food, and access WiFi, Quinlan. He said more than 5,000 customers visited the centers on Monday.

Last Friday, a PG&E contractor lost his life while working on an elevated road in Humboldt County in northern California when his vehicle went over the side of an elevated area, PG&E spokesperson Keith Stephens said. No other details on the contractor’s death were provided.

In addition, another utility company, Southern California Edison, has more than 15,000 customers currently without power and is putting another 350,000 on standby that their electricity may be cut.

The upcoming wind system will push through the state Tuesday, Guy said, and Northern California will bear the brunt of it. Though winds aren’t forecast to be as strong as the current system, it’ll still create dangerous fire conditions.

Neighbors comfort each other

The state’s governor estimated about 180,000 people had evacuated their homes because of the Kincade Fire, which was continuing to scorch Northern California’s wine country into early Monday.

“Where do you put 200,000 people?” said Bill Lembcke, who slept with his wife in their car once they arrived in the county. “We kind of freaked out because we had the fires in 2017. We could see that fire coming over the ridge line toward our house.”

Many got the order to evacuate before dawn Sunday and lined up outside the Marin County Emergency Shelter by the time the sun rose.

To help those displaced, more than 700 Airbnb hosts opened their homes and rental properties across Northern California to evacuees and relief workers until November 7, Airbnb said.

All 40 public school districts across Sonoma County will be closed Monday and Tuesday because of the fire, the Sonoma County Office of Education said. The Los Angeles Unified School District schools that closed on Monday will remain closed on Tuesday, according to the district.

Many evacuees left their homes in the middle of the night, some woken by neighbors or firefighters, Red Cross spokeswoman Marilyn Jimenez Davila said in an interview at the Westwood Recreation Center.

More than 100 people came to the shelter, she said. Some called their loved ones as soon as they arrived. A lot of them had prepared to evacuate in advance, and arrived with important documents and emergency kits.

Some evacuees went to work in the morning, and as the day went on, some people seemed to feel less nervous.

“They are neighbors, so they are chatting with each other and are feeling more calm now,” Jimenez Davila said.