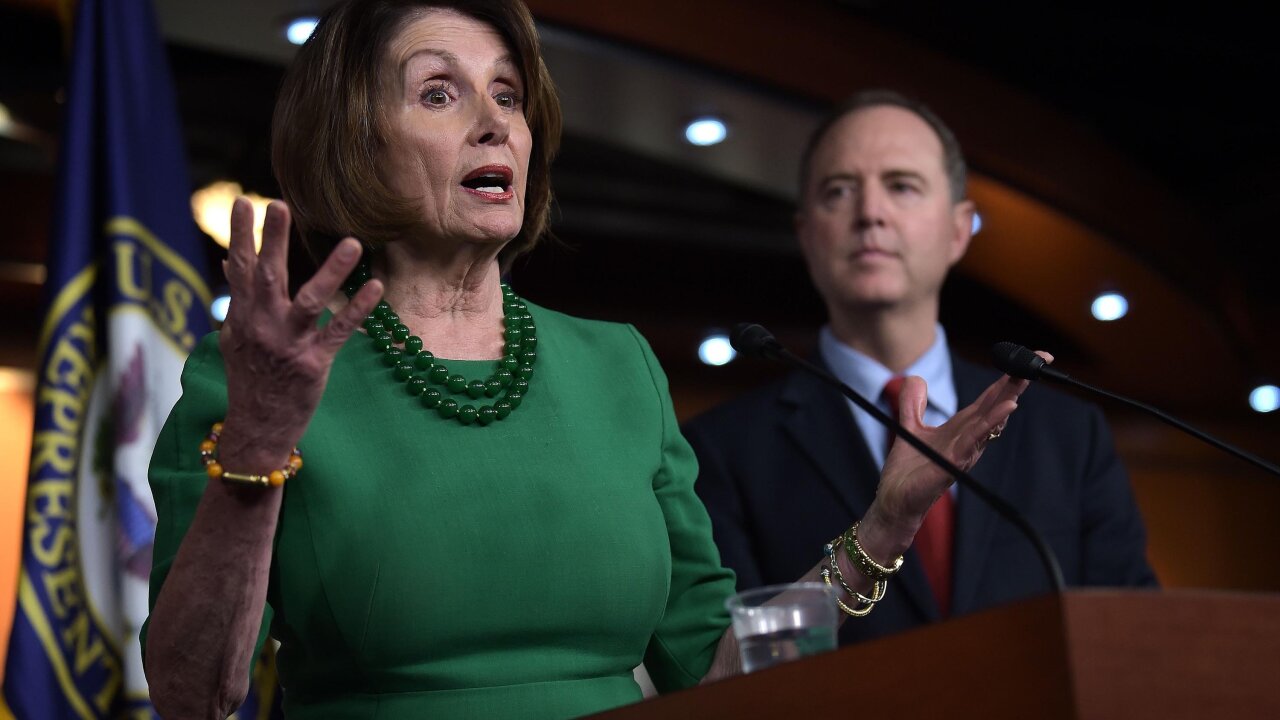 Speaker of the House Nancy Pelosi holds a press conference with House Intelligence Committee Chairman Adam Schiff in Washington on October 15, 2019. House Democrats are preparing to unveil a resolution this week that will detail their next steps in the impeachment inquiry as it moves into a public phase.

The House of Representatives on Thursday approved a resolution to formalize the procedures of the impeachment inquiry into President Donald Trump, marking a significant step in the ongoing inquiry and setting the stage for the next phase in the investigation.

The vote was 232-196 and was the first time that the full House chamber took a vote related to the inquiry.

The resolution provides the procedural details for how the House will move its impeachment inquiry into its next phase as it investigates a whistleblower complaint alleging that the President attempted to pressure Ukraine to interfere in the 2020 presidential election by investigating the family of his potential political rival, former Vice President Joe Biden.

Speaker of the House Nancy Pelosi holds a press conference with House Intelligence Committee Chairman Adam Schiff in Washington on October 15, 2019. House Democrats are preparing to unveil a resolution this week that will detail their next steps in the impeachment inquiry as it moves into a public phase.

The speaker usually does not preside, but for this historic vote — House Speaker Nancy Pelosi is doing so Thursday morning.

Before the vote, Pelosi said she had the votes to pass the resolution but called it a “sad day” because “nobody comes to Congress to impeach a president.”

“Today we move further down the path in our inquiry by putting forth our procedures, which are very transparent and open and frankly more transparent and more open giving more privileges to the President,” Pelosi said.

Pelosi added: “It isn’t about partisanship, it’s about patriotism”

The resolution provides the procedural details for how the House will move its impeachment inquiry into its next phase as it investigates a whistleblower complaint alleging that the President attempted to pressure Ukraine to interfere in the 2020 presidential election by investigating the family of his potential political rival, former Vice President Joe Biden.

The House Intelligence, Foreign Affairs and Oversight Committees have been holding a series of closed-door interviews with current and former administration officials as part of the inquiry, a phase of the probe that is still ongoing and has already stretched over several weeks.

But House Democrats have said that they intend to hold public hearings as well and the resolution vote comes as the House gears up for that to soon get underway.

The text of the resolution lays out how the House Intelligence Committee will conduct public hearings and how the House Judiciary Committee “shall report to the House of Representatives such resolutions, articles of impeachment, or other recommendations as it deems proper.”

The resolution also states that the minority may request witnesses to be called and issue subpoenas — but those subpoenas can only be issued “with the concurrence of the chair,” meaning that Democrats would have to sign off on any Republican-led subpoenas.

The resolution says that the House Intelligence Committee will write a report “setting forth its findings and any recommendations” and that the report will be transmitted to the Judiciary Committee and be made public.

Congressional Republicans and the White House have criticized the way Democrats are conducting the impeachment inquiry as unfair and secretive, and Republicans have called on the full House to hold a vote to authorize the inquiry.

Democrats say Thursday’s vote is not a formal authorization of the impeachment inquiry, but the decision to hold a vote may nevertheless serve to undercut the Trump administration talking point that the inquiry was illegitimate because it did not receive a full House vote.

House Democrats are discussing a time frame that would include public impeachment hearings before Thanksgiving and votes on whether to impeach Trump by Christmas, multiple Democratic sources have told CNN, though the timing remains fluid.

The vote on Thursday is expected to pass with the vast majority of Democrats in favor. But it will put pressure on a number of Democrats in tough reelection races to announce whether they approve of the inquiry.

Many of them have already decided to vote for it, discounting Republicans who say that they’ll lose their seats over a resolution that will lay out the procedure of the probe in dry terms.

The National Republican Congressional Committee’s press operation spent much of Wednesday warning that vulnerable Democrats are going to suffer whether they vote for the resolution or not, in either turning off the party’s base or independents opposed to impeaching Trump.

In one email, NRCC press secretary Michael McAdams listed several New Jersey Democrats in competitive House races and charged that “every one of them promised voters they’d deliver on issues like transportation, health care and better-paying jobs, but instead they’ve spent their time in Washington trying to remove President Trump from office.”

Rep. Tom Malinowski, one of the members McAdams named, is also one of the impeachment investigators. He said he is going to vote for the resolution in order to set the ground rules going forward.

“Some of their political operatives from Washington should come to the town halls that I’ve been having,” said Malinowski. “If they did, they wouldn’t be saying that defending the Constitution is something my constituents don’t care about. Those kinds of statements, I think, would be seen as insulting by the people that I represent.”

Another New Jersey Democrat, Rep. Josh Gottheimer, seemed slightly less enthused about voting for the resolution. He told CNN he “likely” would as a way “to get to the facts” without prejudging them. But Gottheimer said what’s “most important” to serving his district were several issues — cutting taxes, standing by cops, fire fighters and military veterans, keeping air and water clean and health care costs low — that did not include impeaching the President.

Almost all Republicans appear to be opposed to the resolution. Despite the seriousness of the allegations that Trump abused his power in asking a foreign government to investigate a political rival, the vote on Thursday will show how much Republicans in Congress support Trump—and how little they care for how Democrats have led the inquiry.

While Republicans have pushed for weeks to open the inquiry to the public, they argue that the Democrats’ move is too little, too late.

“You don’t get another chance to make a first impression,” Rep. Andy Biggs, an Arizona Republican and one of Trump’s strongest defenders in Congress, told CNN.