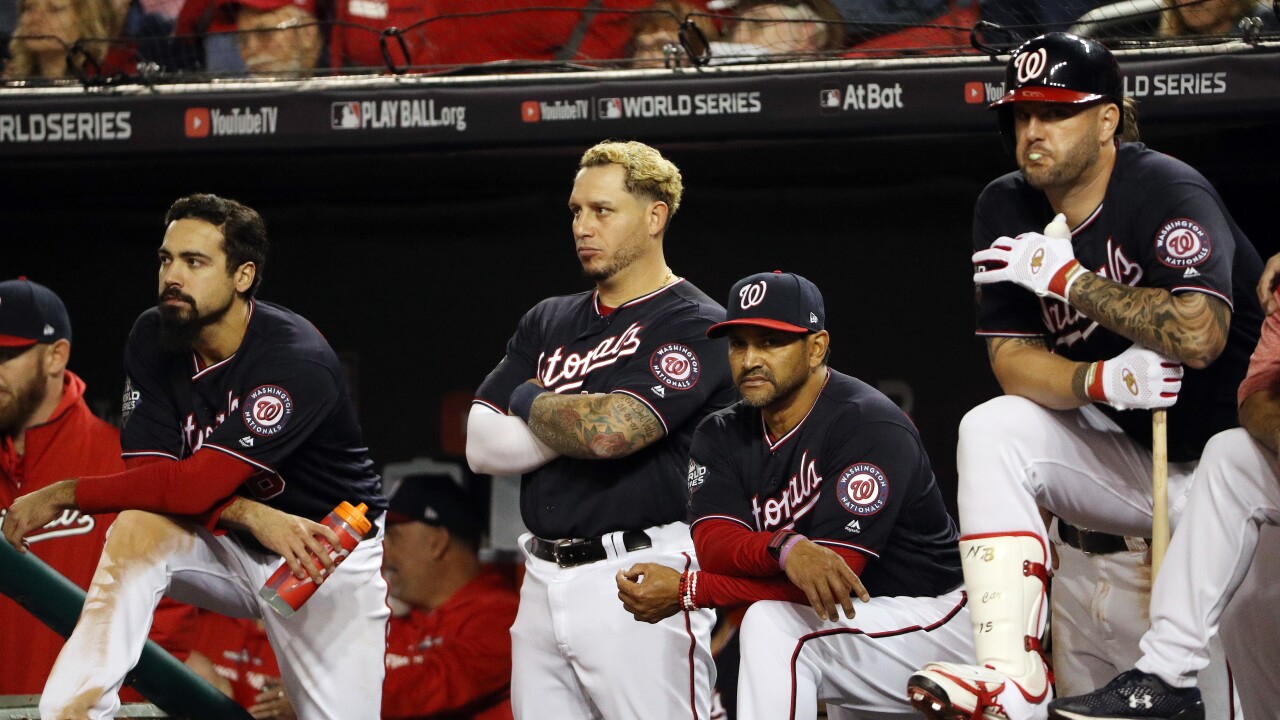 The Washington Nationals look on against the Houston Astros. (Photo by Patrick Smith/Getty Images)

The Washington Nationals look on against the Houston Astros. (Photo by Patrick Smith/Getty Images)

WASHINGTON, DC – Whichever chef was in charge of the home cooking, he or she needs to be fired.

The Washington Nationals, after stunning the Astros with wins in game 1 and game 2 in Houston, came home to Washington, DC with a 2-0 lead in the 2019 World Series. However, hosting the first World Series games in our nation’s capital since 1933, the Nats went 0-for-3.

Houston was victorious in games 3, 4 and 5 to take a commanding 3-2 series lead back to Minute Maid Park for Tuesday’s game 6.

“We feel terrible,” admitted Nationals relief pitcher Sean Doolittle, a UVA product. “The fans were incredible. We just couldn’t give them anything to cheer for. They waited how many years for the World Series? That’s frustrating. Maybe we were pressing a little bit, trying to blow the roof off this place – trying to force the issue a little bit?”

“The fans came to support and gave us everything they had until the end,” outfielder Adam Eaton added. “Hats off to them. We apologize we didn’t give them more to celebrate, but it’s not because we didn’t try.”

“Unfortunately we didn’t play good baseball at home,” noted Daniel Hudson, the Nationals closer from Virginia Beach. “But we have the opportunity to go something special on the road and come back and celebrate with our fans when we come back home.”

The @Nationals clubhouse was certainly frustrated…but not entirely defeated after dropping 3 straight at home to trail the best of 7 #WorldSeries, 3-2.

Sean Doolittle, the former @UVABaseball standout, says the @Nationals “feel terrible” they didn’t give their home fans anything to cheer about. But, they’re optimistic with Strasburg in game 6 (not worrying about game 7 yet).#WorldSeries #OnePursuit https://t.co/bhtsl15OeL pic.twitter.com/QXBNb7Z9Au