Secretary of the Navy guarantees USS Gerald R. Ford will be deployable before 2024 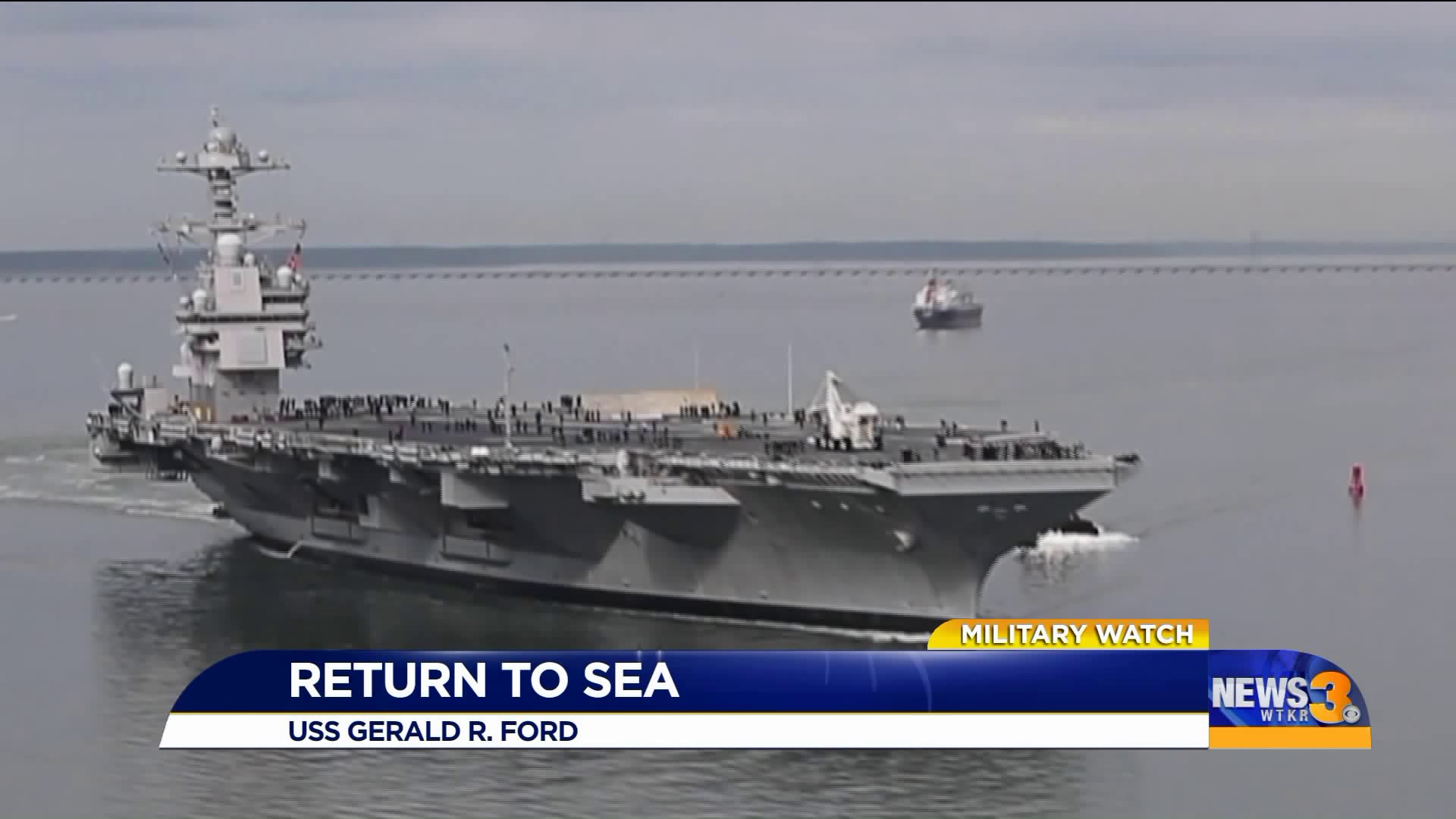 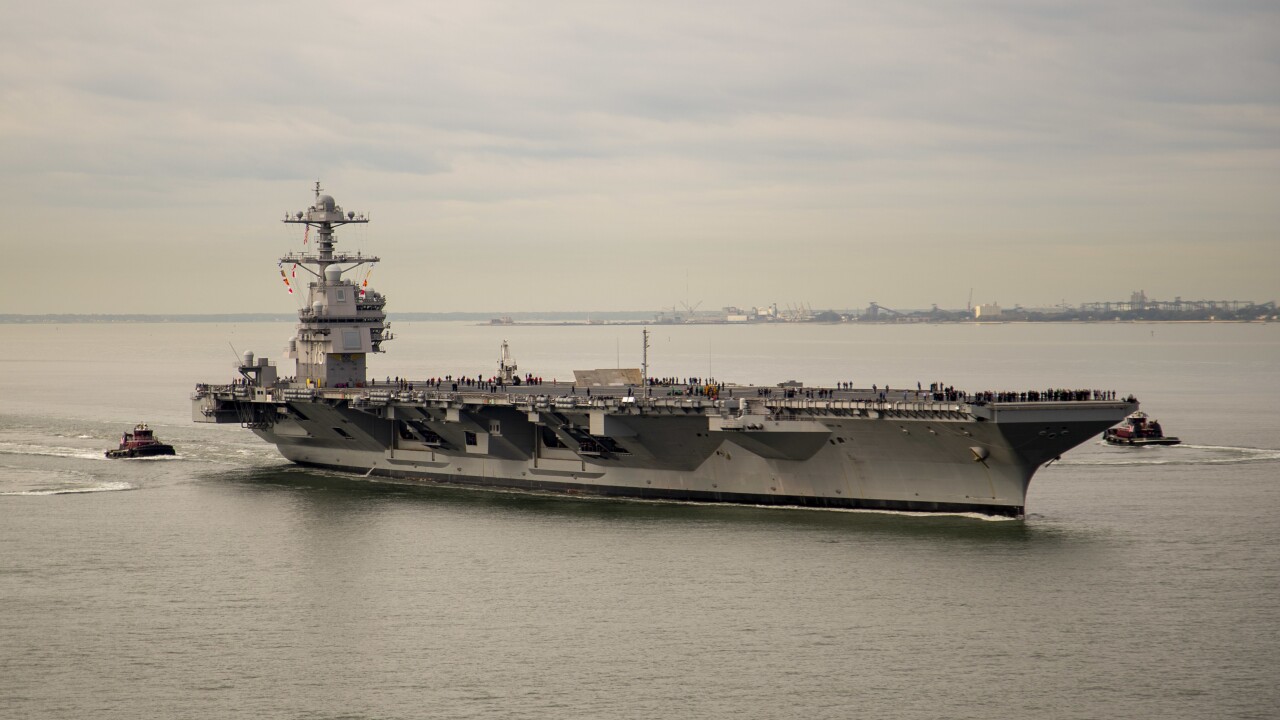 NORFOLK, Va. - Secretary of the Navy Richard Spencer paid a visit to the USS Gerald R. Ford underway at sea Sunday, less than a week after progress on the new carrier faced criticism in a congressional hearing.

The Ford returned to sea Friday following a 15-month Post-Shakedown Availability at Newport News Shipbuilding where the aircraft carrier was built.

USS Gerald R. Ford is the first in a brand-new class of nuclear-powered carriers for the Navy, marking the first new design in decades. The Ford-class will replace current Nimitz-class carriers. However, delays, cost overruns, and problems with new systems have plagued Ford's development.

Speaking with News 3 anchor Todd Corillo Sunday afternoon after his visit to the Ford, Secretary Spencer said morale on the ship is high.

"We see an energized crew and an energized team and that is the main thing I was concerned about. They are knocking down 22,000 work orders in the last two months to get ready to go. Their shoulders are to the wheel and their attitude is in the right place. It was great to see."

The Advanced Weapons Elevators on the Ford have been the focus of intense scrutiny. Unlike the Nimitz-class which use cables and pulleys, the Ford-class weapons elevators rely on electromagnetic technology.

Spencer said as of Sunday, seven of the 11 elevators on the Ford are "moving" with four of those seven certified. "We’re getting better," he added.

"I just truly don’t feel like this is a great investment as a taxpayer. $13 billion on a ship that’s going to deploy six years past its original design timeline," Congresswoman Luria stated, adding that the Ford is essentially a "$13 billion nuclear-powered floating berthing barge."

That prompted a response from Secretary Spencer the next day during a discussion at the Brookings Institution in Washington, D.C.

"I look at her and other leadership on the Hill that continually disparage the Ford as a program and I get a little upset and then I go, 'Wow Richard, think of the positive here: you could not ask for leaders in Congress who take disparaging comments against a platform we’re developing with new technologies, you could not ask for a better disinformation program for our competitors,'" Spencer said.

In turn, Congresswoman Luria released a statement saying "I find it disappointing that the Secretary finds Congressional oversight disparaging. Here are the facts: The USS Ford will be six years delayed in its initial deployment, which causes incredible strain on the carrier fleet," adding "the Navy accepted the design of these systems and accepted the ship in an incomplete state from [Huntington Ingalls Industries], so it is absolutely my role to question Navy leadership on their current failure to deliver an operational ship to the fleet."

Secretary Spencer elaborated on his comments after visiting the Ford on Sunday.

"My issue that I had, the frustration that I had with the comment, had nothing to do with oversight. I totally get oversight, that’s the role of Congress. What I was just concerned about was the fact that I have a whole bunch of people on both the deck side and pier side working their hearts out and to have disparaging comments like that didn’t really help me to get to my goal which is to get the ship out. Oversight, I get it. Help is what we are looking for. Help us go forward."

Huntington Ingalls Industries, parent company of Newport News Shipbuilding, also faced criticism from Secretary Spencer. He says the shipbuilders who are working alongside the Navy to 'knock-down' problems are doing a 'great job,' but said he had issues with management, especially when it comes to the weapons elevators.

"My issue is with senior management and the board of directors. I do not believe that we did have an understanding of their understanding of the issue as translated to us," Spencer said Sunday, adding "I want to make sure that the senior management and that the board of directors at HII Newport News are aware of this and are applying the appropriate resources to get us tackled down. Their workforce is doing a great job."

In a statement to News 3, Huntington Ingalls Industries wrote "USS Gerald R. Ford is a first-in-class ship and with that come many unique challenges.  We have been working closely with the Navy to resolve those challenges. We are proud of the work that our shipbuilders have accomplished.  Most things have gone very well.  Some of the newer technologies have been more challenging than anticipated. This is to be expected on any first-in-class ship. With respect to the advanced weapon elevators, we have four certified elevators turned over to the Navy, and we are on a path to complete the remaining seven in the coming months.  We will continue to support our Navy partner in their preparations for the ship’s deployment and we’re confident that Ford will bring great capability to the Navy and to our Nation for decades to come."

Secretary Spencer lauded other new technology on the Ford that is working, including dual band radar and the Electromagnetic Aircraft Launch System or EMALS. "Planes are certified ready to come on board. We did 747 traps last cycle, you’ll see us do more going forward."

As to when the Ford might be ready to deploy, another sticking point of recent scrutiny, Secretary Spencer wouldn't commit to an exact timetable but said "That’s going to be way before 2024, I guarantee that."

Once the Ford finishes sea trials, the carrier is expected to return to Naval Station Norfolk where it will enter a post-delivery test and trials period. That will include certifying fuel systems and the flight deck, as well as testing aircraft compatibility and the combat systems.