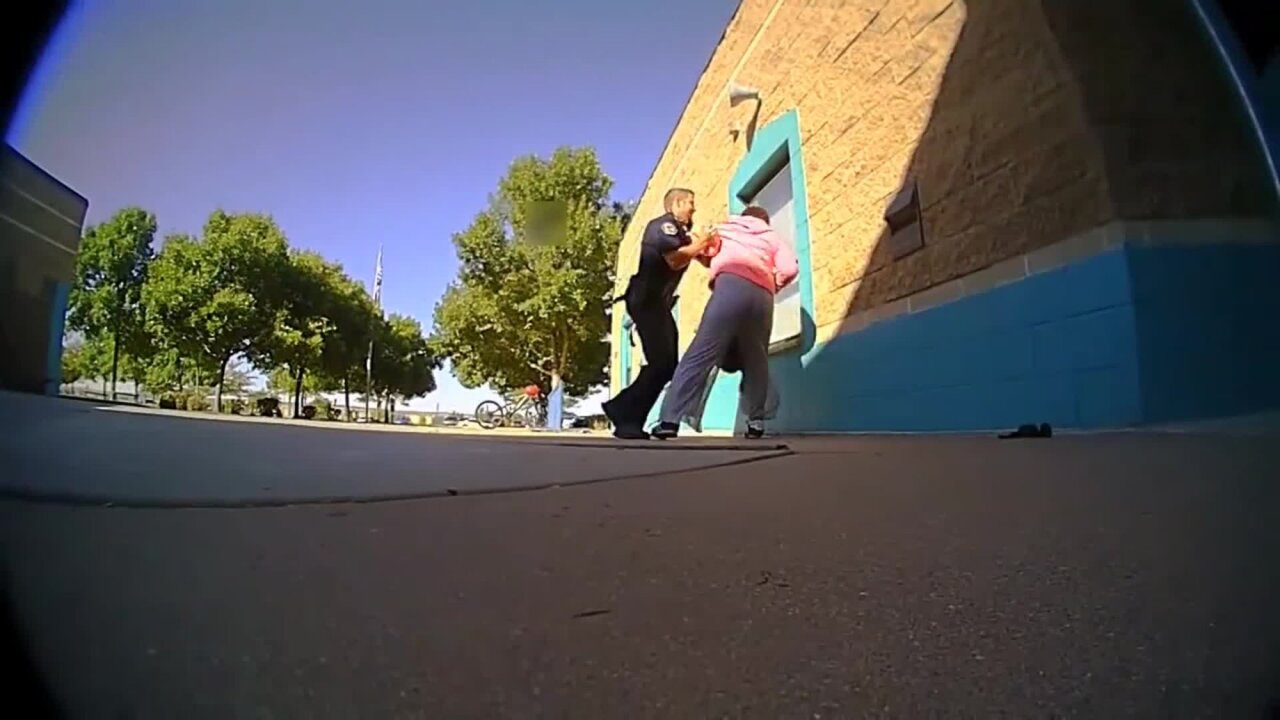 Body camera footage shows the officer pushing the student against the wall, ending with them on the ground.

A New Mexico middle school resource officer who was seen on body camera footage using force against an 11-year-old girl is no longer with the force, police said Monday.

Body camera footage shows the officer pushing the student against the wall, ending with them on the ground.

The student sustained a minor concussion after the officer pushed her against a wall and later held her to the ground, the Farmington Police Department said. The incident also resulted in the reassignment of a supervisor who reviewed but did not flag the behavior as unacceptable, Farmington Police Chief Steve Hebbe said in recorded comments on the department’s Facebook page.

The case has been referred to the New Mexico State Police for possible criminal charges, Hebbe said.

The officer alleged that the student had assaulted school staff, but a review of the incident showed that wasn’t true, Hebbe said.

Related: Charges pending after teen with special needs is punched at school

It began on August 27 when an 11-year-old girl threw milk on the ground in the Mesa View Middle School cafeteria after being told she could only take one, said Nicole Brown, the public information officer for the department. School officials asked school resource officer Zach Christensen to assist with a disruptive student.

Christensen could not be reached for comment. CNN has reached out to the Farmington Police Officers Association for comment on Christensen’s behalf.

Unidentified school employees are heard in the body camera footage telling Christensen about prior disciplinary issues they’d had with the girl. Later, she is seen standing in the doorway to the school, holding the door open.

At this point in the video, Christensen can be seen walking after the student and says, “I’ve had enough of this” and “you’re done.” As he reaches the student, he tells her to take off her bag and a struggle ensues. In the struggle, he tells her to put her arms behind her back.

In the video, Christensen pushes the girl into a wall and they end up on the ground, with Christensen holding her down while commanding her to put her arms behind her back.

“Ow, you’re hurting me,” she cries. “You can’t give me all these commands and expect me to do every single one of them at once.”

A school employee is heard telling the officer to let her stand, but he tells him “We’re past that.”

The student suffered minor scrapes and bruises and was treated for a minor concussion, according to Brown.

Christensen struggles with the student on the ground, telling her to stop resisting as she asks him to get off of her.

“Officer Christensen, she is not a threat to yourself or others at this moment,” a school official can be heard saying.

“I understand that, sir, but we are not going to use excessive force to get this done,” the official says.

The incident was discovered as part of a routine internal review process, said the department in a statement. The family contacted the department the day after it happened and has stayed in contact, Hebbe said. Christensen was immediately placed on administrative leave, the department said.

“Deputy Chief Tyler and I met with a girl’s mother and watched the video in its entirety. We spent time discussing where the officer failed to meet our standards, and what should have happened. We met with the student and personally apologized for how she was treated like any situation such as this,” Hebbe said in the Facebook post.

“When we fall short of our expectations and standards, we hold ourselves accountable. Like many of you, I was shocked and angry when I watched this video,” said Hebbe.

The school district is also reviewing its procedures following the incident.

“Farmington Municipal Schools extends its apologies to the student and family involved in this unfortunate incident. FMS administration is reviewing this incident with the intent of putting into place procedures and practices to prevent another instance like this. The safety of all students entrusted to our care is among our highest priorities,” the school district said in a statement.