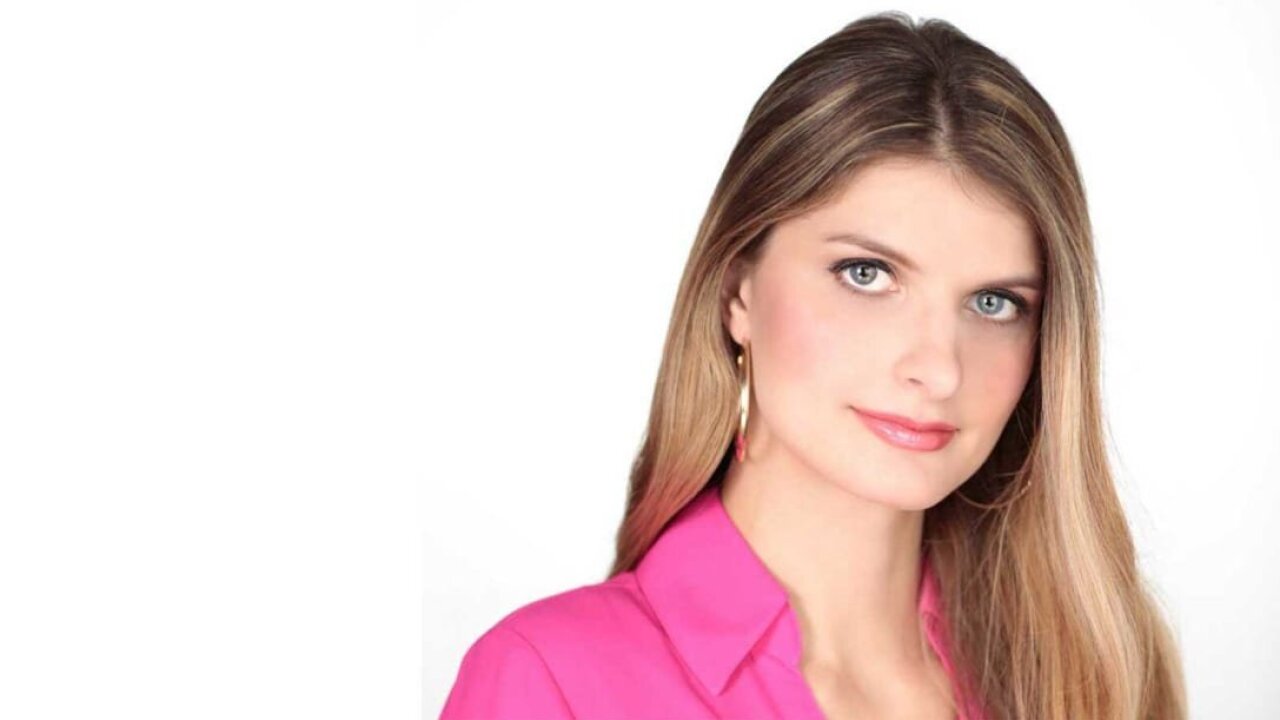 At 13, Kozakiewicz was abducted from her Pittsburgh home by a predator who had groomed her online.

When you’re passing through an airport, you’re usually focused on getting through the security line quickly, on whether your flight’s on time, or on the vacation or business meeting waiting for you at your destination.

At 13, Kozakiewicz was abducted from her Pittsburgh home by a predator who had groomed her online.

But glancing around and taking stock of your fellow passengers could help save a life. It’s not just vacationers who travel on planes; airports are also hubs for human trafficking — when adults or children are transported into forced labor or commercial sexual exploitation.

Seeing something and reporting it could potentially keep someone from becoming a victim of modern slavery.

At 13, Kozakiewicz was abducted from her Pittsburgh home by a predator who had groomed her online. Following her rescue and a period of counseling and recovery, at the age of 14 she started speaking in schools so that others could learn from her experience.

Ensuring aviation workers and travelers are aware of the issue could help halt the problem, Kozakiewicz tells CNN Travel.

When she was abducted, Kozakiewicz wasn’t taken on an airplane, but her kidnapper did drive her across state lines, from Pennsylvania to Virginia.

Kozakiewicz vividly remembers the moment during the drive when the car approached a toll booth.

Terrified, Kozakiewicz still felt a glimmer of hope, as she knew an interaction was upcoming.

“I thought that was the moment I was going to be rescued,” she says.

“At that point, I figured the tollbooth attendant would look into the car, see a little girl crying and ask the question and I would be brave enough and I would be strong enough to say, ‘Help me, I’ve been kidnapped.'”

But as the car pulled up, Kozakiewicz was severely threatened by her kidnapper. She was too scared to say anything as the car window rolled down.

But, she thought, surely the tollbooth worker would notice her? Ask probing questions? Report the number plate?

“Nothing happened,” she says. “The money was exchanged, and the gate went up. And that happened a couple times through each tollbooth; I’d have that moment of hope. And then that letdown.”

Kozakiewicz doesn’t blame the people who worked the tolls that night. Far from it.

The issue, she says, is they weren’t trained to look for the signs. If they did suspect anything, they wouldn’t have known what to do.

“But that could have been over so quickly,” Kozakiewicz says.

Instead, Kozakiewicz spent four days held in captivity by her abductor. She was sexually assaulted, chained by her neck and tortured. Her kidnapper livestreamed her torture online.

She was rescued by the FBI, following an anonymous tip from an internet user who saw the livestream video and recognized Kozakiewicz from a missing person poster.

Now, via her work for Airline Ambassadors International, Kozakiewicz — who also holds a master’s degree in forensic psychology from the Chicago School of Professional Psychology — is able to give airport and airline staff, who’ll see hundreds, even thousands, of passengers a day, that ability to recognize and report suspicious behavior.

Rivard started AAI in 1996, as a humanitarian charity. The idea behind the organization was that “flight attendants could be a role model for the traveling public and inspire the public to travel to do good, to help others,” Rivard tells CNN.

AAI didn’t begin focusing on human trafficking until several years later. During a 2009 trip to Cambodia to help orphaned children, Rivard and her fellow flight attendants met a malnourished three-year-old girl who, they were told by local villagers, was due to be collected by traffickers later that day. The group intervened, taking the child to New Hope, a Cambodia-based non-governmental organization.

Shocked by what they’d seen, the flight attendants vowed to look out for signs of human trafficking on their airlines and future trips. The following month, on a mission to the Dominican Republic, they correctly identified trafficking victims on two flights run by two different airlines flying back to the United States. That same month, on two more flights, operated by two further carriers, the team identified further victims.

Rivard says the first tip led to the bust of a pornography ring in Boston, involving 86 children.

“That’s how we knew we were onto something,” she says.

Still, it took time, Rivard says, to persuade transport groups and airlines to engage with the issue. She suspected carriers didn’t want their brands associated with something so negative.

But since 2011, AAI has conducted over 100 airport trainings across the world. The group’s even influenced US legislation — since July 2016, the FAA Reauthorization Act requires carriers to provide training on how to recognize and report suspected human trafficking.

Coordinating with the US Department of Homeland Security, Customs and Border Protection and the Department of Transportation, AAI’s trained staff from airlines such as Icelandair and ANA Airlines.

The focus of each session is to make clear the potential signs of human trafficking, outline how to report it and bring to life this pressing issue, with real-life stories of survivors.

In 2007, the then-19-year-old Kozakiewicz testified before Congress about her abduction, in support of the PROTECT Our Children Act. This act was passed the following year, establishing a new task force to increase the investigative capabilities of state and local law enforcement.

Five years later, in 2013, Rivard saw a video of Kozakiewicz’s testimony. She was struck by Kozakiewicz’s passion, how she spoke movingly and assuredly about her horrific experience. “I have to meet her,” Rivard thought.

Now, Kozakiewicz is one of several survivors who tells her story as part of AAI’s training program.

“It’s important to me to not just be a part of everybody talking about making a difference, or just raising awareness,” Kozakiewicz says. “Yes, that’s incredibly important, but I also want to do something.”

Kozakiewicz starts her presentations appearing to be just one of the trainers. Later, she gets to her story. She knows it will shock the audience, that’s partly the point — as Rivard says, once people hear a survivor’s story, audiences are far more likely to look for the indicators going forward.

“That makes it real,” agrees Kozakiewicz.

But she doesn’t end her presentations with her abduction. She wants to make clear to audiences that her life didn’t end there, and her trauma doesn’t define her.

Kozakiewicz proceeds to talk about her college graduation, her wedding and working with PROTECT, the National Association to Protect Children, to help pass Alicia’s Law, which provides funding to the Internet Crimes Against Children (ICAC) task force. Telling the story of her life so far reinforces the idea that survivors are worth saving, Kozakiewicz says.

While the AAI sessions concentrate on airport staff, both Kozakiewicz and Rivard stress that travelers can also do their bit to stop human trafficking.

In fact, travelers might be even more likely than airplane staff to notice something suspicious. There’s been instances of passengers noticing other travelers’ text messages, for example.

If anyone suspects someone is being trafficked, alerting the airport authorities should be their first port of call.

On the ground, concerns should be reported to an official. In the United States, that can involve a call to the Homeland Security Tip Line.

Airline Ambassadors International has also produced “TIP Line” (standing for Trafficking in Persons) reporting apps, which work internationally and are free to download on Apple’s app store and Google Play.

One is designed for airline staff who’ve been trained by AAI, the other is for anyone. The one for travelers includes a list of contact numbers for airport police across the world and links to reporting websites including the FBI and Polaris Project.

“Maybe you’re sitting there and you’re waiting for your flight or you’re standing in security, or you’re on the plane — there’s a lot of time to sit and be with people. So, pay attention. And report if you see something, if you have that gut feeling. Go with it, don’t second-guess it too much. And it’s a hard thing to do, because you may disrupt somebody’s life for a few moments if they aren’t doing anything.”

“But if there’s a chance, saving somebody’s life — what could be more important than saving somebody from being tortured and abused and possibly murdered? And I know, because my life was saved.”

You might notice that a traveler has few or no personal items. Victims may be less well-dressed than their companions. They may be wearing clothes that are the wrong size, or are not appropriate for the weather for their destination.

2. A traveler is traveling alone, but doesn’t seem to know details of who will be meeting them on arrival

A trafficker may have bought the traveler a ticket under the pretense that they have a modeling job, or something similar, awaiting them at their destination.

3. They have a tattoo with a bar code, crown, bags of money possibly the words “Daddy” or “Property of”

Many people have tattoos, so a tattoo in itself is obviously not an indicator. However, traffickers or pimps may mark their victims as a sign of ownership, so a barcode tattoo, or a tattoo saying “Daddy” or even a man’s name, could be a red flag that the person is a victim.

4. They can’t provide details of their departure location, destination or flight information

Traffickers employ a number of tools to avoid raising suspicion about their crime and to keep victims enslaved. Some traffickers won’t tell their victims where they are, where they are being taken or what job is supposedly waiting for them. This makes it harder for them to escape.

5. Their communication seems scripted, or there are inconsistencies with their story

Sometimes traffickers will coach their victims to say certain things in public to avoid suspicion. A traveler whose story seems inconsistent or too scripted might be trying to hide the real reason for their travel and merely reciting what a trafficker has told them to say. The same applies to the suspected trafficker — they may provide inconsistent details about the victim’s name or age.

6. They can’t move freely in an airport or on an airplane, or they are being controlled, closely watched or followed

People being trafficked into slavery are sometimes guarded in transit. A trafficker will try to ensure that the victim does not escape, or reach out to authorities for help.

7. They are afraid to discuss themselves around others, deferring any attempts at conversation to someone who appears to be controlling them

Fear and intimidation are two of the tools that traffickers use to control people in slavery. Traffickers often prevent victims from interacting with the public because the victim might say something that raises suspicions about their safety and freedom.

8. They seem to be afraid of uniformed security personnel

They may be fearful of revealing their immigration status. Therefore it can be worthwhile for airport officials to dress in plainclothes when approaching potential victims.

A child being trafficked for sexual exploitation may be dressed in a sexualized manner, or seem to be under the influence of drugs or alcohol.

A child may appear to be malnourished and/or shows signs of physical or sexual abuse, such as bruises, scars, or cigarette burns.

This list was compiled with help from the following organizations:

Free the Slaves: Campaigns against modern slavery around the world.

International Justice Mission: Works to protect the poor from violence in the developing world.