Redskins pick up first win of the season by defeating the Dolphins, 17-16 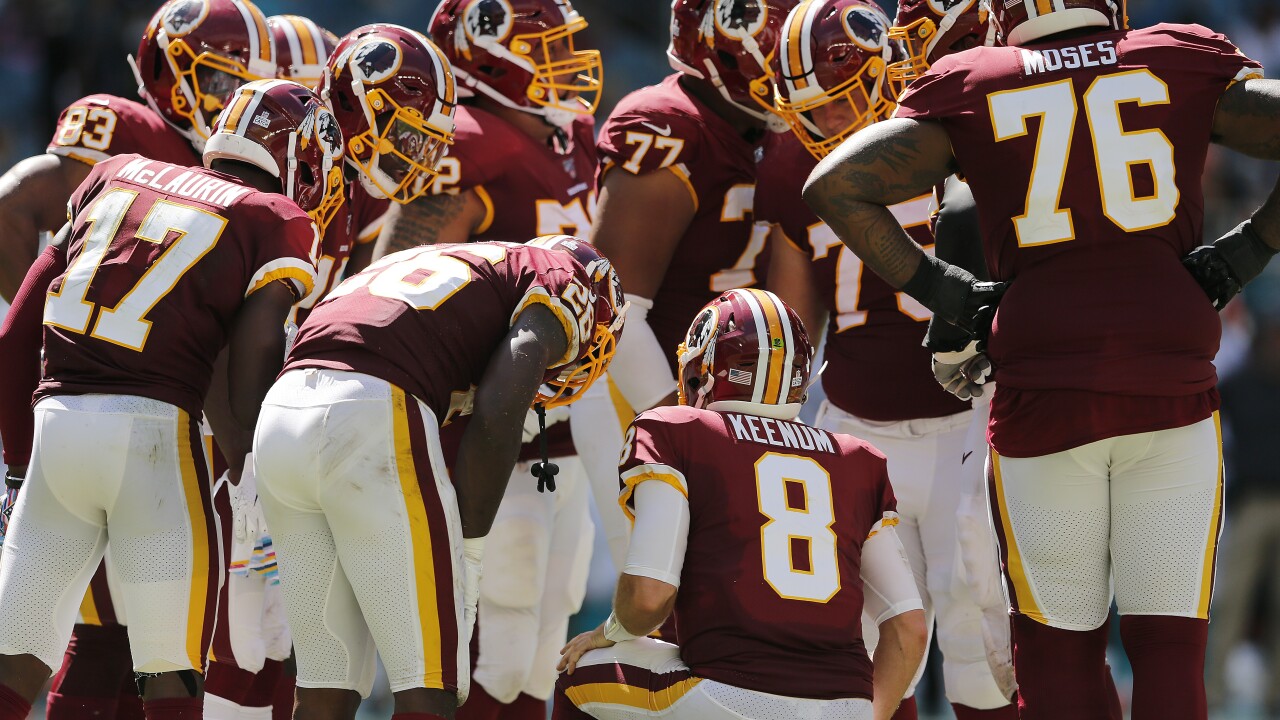 MIAMI, FLORIDA – OCTOBER 13: Case Keenum #8 of the Washington Redskins calls a play in the huddle against the Miami Dolphins during the second quarter at Hard Rock Stadium on October 13, 2019 in Miami, Florida. (Photo by Michael Reaves/Getty Images)

MIAMI, FL – OCTOBER 13: Terry McLaurin #17 of the Washington Redskins gives the football to a fan after scoring a touchdown in the first half.. (Photo by Eric Espada/Getty Images)

MIAMI GARDENS, Fla. – The Washington Redskins (1-5) can call themselves winners for the first time in 2019 after picking up a win against the Miami Dolphins (0-5).

Early on, the game was what you would expect from two of the worst teams in the NFL, messy and lacking big plays.

With a score of 0-0 in the second quarter, Washington was first on the board when quarterback Case Keenum threw a 25-yard touchdown pass to Terry McLaurin to take a 7-0 lead. McLaurin’s fourth touchdown of the season has him leading rookie receivers in touchdown catches.

All the Dolphins’ offense could manage in the first half was a field goal, as Washington took a 7-3 lead into the locker room at halftime. Each quarterback left a lot to be desired, as Keenum was 5-for-11 with 46 yards and Rosen was 13-for-19 with 77 yards.

In Washington’s first possession of the second half, the Redskins once again turned to McLaurin. Wide open, he made a 33-yard touchdown catch and the Redskins took a 14-3 lead.

Washington quickly got the ball back when linebacker Shaun Dion Hamilton made a diving interception, but all they could manage was a field goal that put them up 17-3 in the third quarter.

MIAMI, FL – OCTOBER 13: Terry McLaurin #17 of the Washington Redskins celebrates after scoring a touchdown in the first half. (Photo by Eric Espada/Getty Images)

Then, the Dolphins pulled Rosen in favor of veteran quarterback Ryan Fitzpatrick, hoping to resurrect the FitzMagic that he had with the Tampa Bay Buccaneers last season. He wasted no time, handing the ball off to Kalen Ballage for a one-yard touchdown run at the end of a nine-play, 55-yard drive. The Dolphins then trailed by seven points.

Miami pulls within one point of the Redskins, and instead of going for the tie, the Dolphins attempt a two-point conversion with six seconds remaining in the game.

The Dolphins are unsuccessful and the Redskins win it 17-16, picking up their first win of the season.