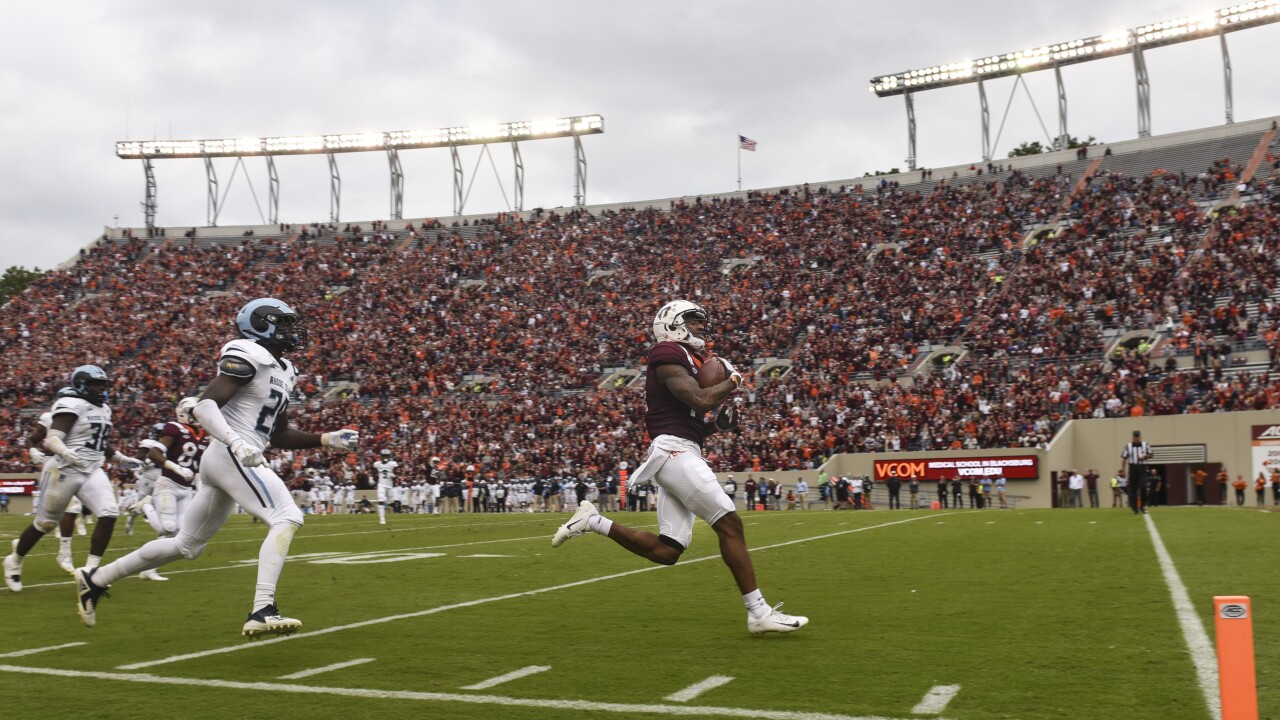 BLACKSBURG, VA – OCTOBER 12: Wide receiver Damon Hazelton #14 of the Virginia Tech Hokies scores a touchdown against the Rhode Island Rams in the first half at Lane Stadium on October 12, 2019 in Blacksburg, Virginia. (Photo by Michael Shroyer/Getty Images)

BLACKSBURG (HokieSports.com) – Virginia Tech quarterback Hendon Hooker threw three touchdown passes, including two to Damon Hazelton, and the Hokies pulled away in the second half to down Rhode Island 34-17 in a nonconference game Saturday afternoon at Lane Stadium.

With the victory, the Hokies moved to 4-2 on the season. Rhode Island fell to 1-5.

After throwing three touchdown passes in his first collegiate start last weekend in the Hokies’ 42-35 victory over Miami, Hooker again played well for Tech, guiding the Hokies on scoring drives on five of their first six possessions. He completed touchdown passes of 9 and 37 yards to Hazelton and 3 yards to tight end Dalton Keene.

Rhode Island cut the Tech lead to 3 on a 9-yard touchdown pass from Vito Priore to Ahmere Dorsey on the Rams first possession of the second half. Rhode Island went for two points and got it, cutting the Hokie lead to 17-14 with 12:26 left in the third.

But Tech answered, as a 10-play 93-yard drive ended with Hooker’s touchdown pass to Keene to give the Hokies a 24-14 lead. Tech then scored 10 fourth quarter points to put the game away.

Hooker completed 16 of 27 for 261 yards, and more importantly, did not throw an interception. Hazelton caught five passes for 93 yards and the two touchdowns, and Deshawn McClease rushed for 124 yards and a score.

Tech, which scored on six of eight possessions, finished with a season-high 485 yards of offense.

KEY PLAY
Tech made several big plays in this one, but one of the biggest – maybe the biggest – came toward the end of the first quarter. The Hokies led 3-0 and faced third-and-9 from the Rhode Island 19. Hooker couldn’t connect with Hazelton, but the Rams’ Rashod Dickerson was flagged for pass interference, giving the Hokies a first down at the Rhode Island 4. Two plays later, Hooker hit Hazelton on the 9-yard touchdown pass to give the Hokies a 10-0 lead, and they were off and running.

• Tech’s first drive of the game resulted in a 22-yard field goal by Johnson, a score that marked the third time this season in which the Hokies have scored on their opening possession of the game.

• Tech’s first scoring drive took 6:16 – its longest drive of the season in terms of time of possession.

• The Hokies’ 93-yard drive on their first possession of the second half – one that ended with Hooker’s touchdown pass to Keene – tied for their longest drive of the season.

• McClease’s 124-yard rushing performance marked his second 100-yard performance of the season (102 vs. Duke) and the fourth of his career.

• Hazelton’s five receptions were a season high, and for the first time in his career, he caught two touchdown passes in the same game.

• Hazleton now has 15 touchdown receptions in his career – 11 at Virginia Tech and four while at Ball State.

UP NEXT
Tech returns to action next Saturday when it takes on North Carolina at Lane Stadium in a game that is part of Homecoming weekend in Blacksburg. The Hokies have won three straight in the series and four of the past five meetings. Tech’s lone loss in that span came in 2015 when it fell 30-27 in overtime to the Tar Heels – a game that marked former head coach Frank Beamer’s last home game as the head coach.