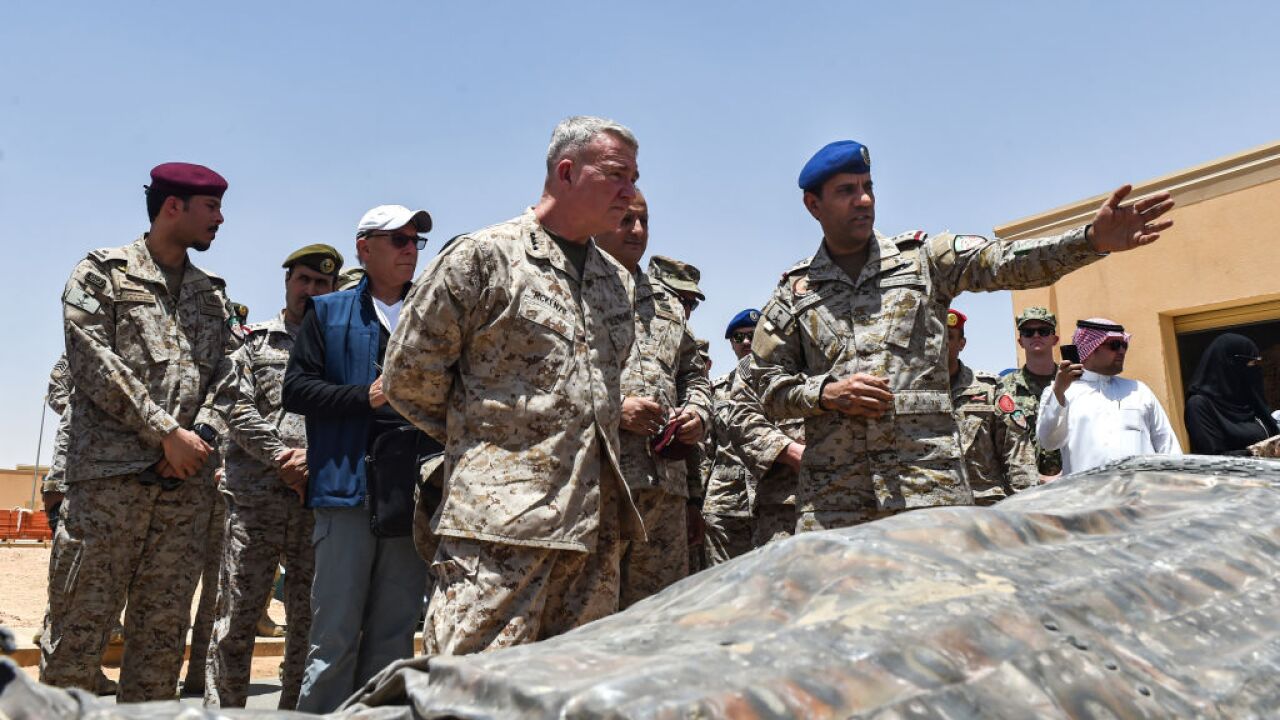 US Marine Corps General Kenneth F. McKenzie Jr. (C, front), commander of the US Central Command (CENTCOM), and Lieutenant General Fahd bin Turki bin Abdulaziz al-Saud (C, behind), commander of the Saudi-led coalition forces in Yemen, are shown by coalition spokesman Colonel Turki bin Saleh al-Malki (C-R) reportedly Iranian weapons seized by Saudi forces from Yemen’s Huthi rebels, during his visit to a military base in al-Kharj in central Saudi Arabia on July 18, 2019. – McKenzie pledged on July 18 to work “aggressively” to ensure maritime safety in strategic Gulf waters after a spate of attacks blamed on Iran. McKenzie’s visit to Saudi Arabia comes a day after the US House voted to block $8.1 billion in arms sales to the kingdom and other allies, in a move likely to be vetoed by President Donald Trump. (Photo by Fayez Nureldine / AFP) (Photo credit should read FAYEZ NURELDINE/AFP/Getty Images)

The Pentagon will deploy about 1,500 extra troops to Saudi Arabia in answer to requests by the leading US military commander in the Middle East and, in part, because the US Navy is unable to send a relief aircraft carrier to deter potential Iranian aggression, multiple US officials tell CNN.

The move to bolster troops in the Middle East comes as President Donald Trump’s decision to pull back US military forces from northeastern Syria has prompted bipartisan criticism from lawmakers who say the President has given Turkey an opening to attack US Kurdish allies who helped in the fight against ISIS.

“Secretary Esper informed Saudi Crown Prince and Minister of Defense Muhammad bin Salman this morning of the additional troop deployment to assure and enhance the defense of Saudi Arabia,” Chief Pentagon spokesman Jonathon Hoffman said in a statement Friday. “Taken together with other deployments, this constitutes an additional 3,000 forces that have been extended or authorized within the last month.”

The US has increased the deployment of forces in the region by 14,000 since May.

The carrier USS Harry S Truman, which was scheduled to deploy to the region in the last several weeks, has been unable to sail due to a broken electrical distribution system. The current carrier in the region, USS Abraham Lincoln, is rescheduled to end its deployment in the next several days.

That has now led to the need for additional capability in the region to replace what a carrier airwing can provide.

Additional aircraft are on standby and some warships may move from the Pacific into the Middle East, officials told CNN.

The request for the forces had been in place for the past several weeks, the officials said.

Gen. Frank McKenzie, head of US Central Command, had long wanted additional air, ground and maritime forces, especially after a devastating September attack on Saudi oil facilities that the US has attributed to Iran.

When the Pentagon announced additional deployments after the Saudi attack, Defense Secretary Mark Esper told reporters that the US troops would be “defensive in nature and primarily focused on air and missile defense.”

After Trump’s Sunday announcement that US troops would pull back in northeastern Syria, Turkey began a planned military offensive into the region on Wednesday, launching airstrikes and artillery fire to try and push Kurdish forces away from Turkey’s border.

Trump on Wednesday downplayed the US alliance with the Kurds, who played a key strategic role in the fight against the terrorist group ISIS, saying “they didn’t help us in the second World War.”

The President had announced in December that he would withdraw all US troops from Syria, which sparked outrage. including from his own party, and led to the resignation of then-Defense Secretary James Mattis.

Trump then later agreed to allowing a small residual US presence in the region to ensure stability and continue fighting the remnants of ISIS.