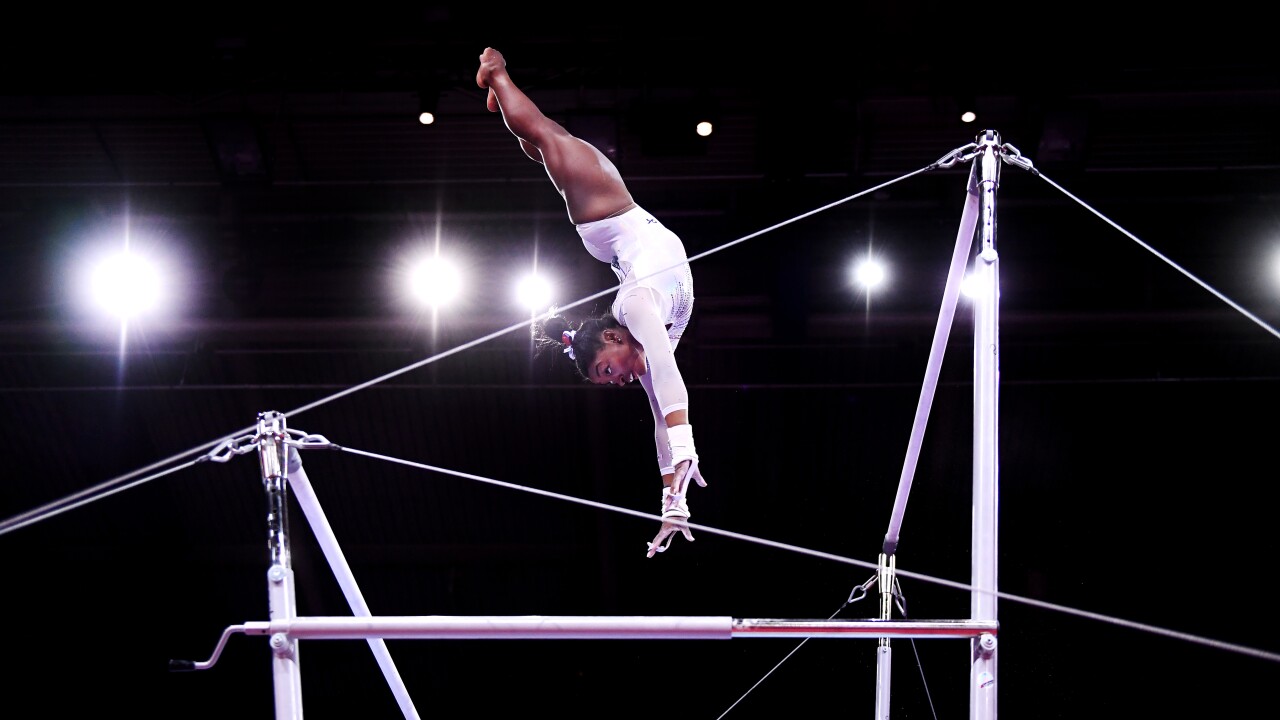 In doing so, she also crushed two of her own records — the biggest margin of victory ever at a world championship, and the most world medals won by a female gymnast (22 and counting).

“I appreciate everyone’s endless support,” she wrote on Twitter, followed by a heart emoji.

Appropriately, she ended her ridiculously difficult floor routine with a mic drop.

Why does Biles keep winning? Because she’s just not satisfied with being the greatest of all time.

Instead, the Olympic champion keeps pushing the limits of the sport, shocking the world with newer, harder skills that no one’s ever seen before.

Biles debuted two insanely risky skills at these world championships — a triple-double on the floor exercise, and a double-double off the balance beam.

A triple-double means cramming three twists and two backflips all into a single jump. Don’t try this at home. The double-double means a double backflip with two twists. Many gymnasts can’t do that on the floor, much less off a treacherous 4-inch-wide balance beam.

On Tuesday, Biles led Team USA to a gold medal in the team competition at these world championships.

Biles’ work ethic and quest for perfection are legendary. Her standards are so high, she described her experience at last year’s world championships as disastrous — even though she won a medal in all six events she competed in.

Even in her weakest event, the uneven bars, Biles stuck a dizzying dismount in the team competition this week, helping ensure US gold.

The other American gymnast to compete in Thursday’s individual all-around, Sunisa Lee, finished eighth, earning respect from around the world for her mental toughness.

The 16-year-old’s father, Navy veteran John Lee, recently became paralyzed after falling off a ladder while helping a neighbor trim tree branches. A GoFundMe account has been established to help pay for the Lee family’s medical bills.

Both Biles and Lee have opportunities to collect more medals this week during the individual apparatus finals.

Lee qualified for the floor exercise finals and the uneven bars finals, and Biles qualified for all four apparatus finals (beam, vault, floor and bars).

Biles says she’s ramping up for the 2020 Olympics in Tokyo. But sadly for all of us, she has said that will be her last Olympics.