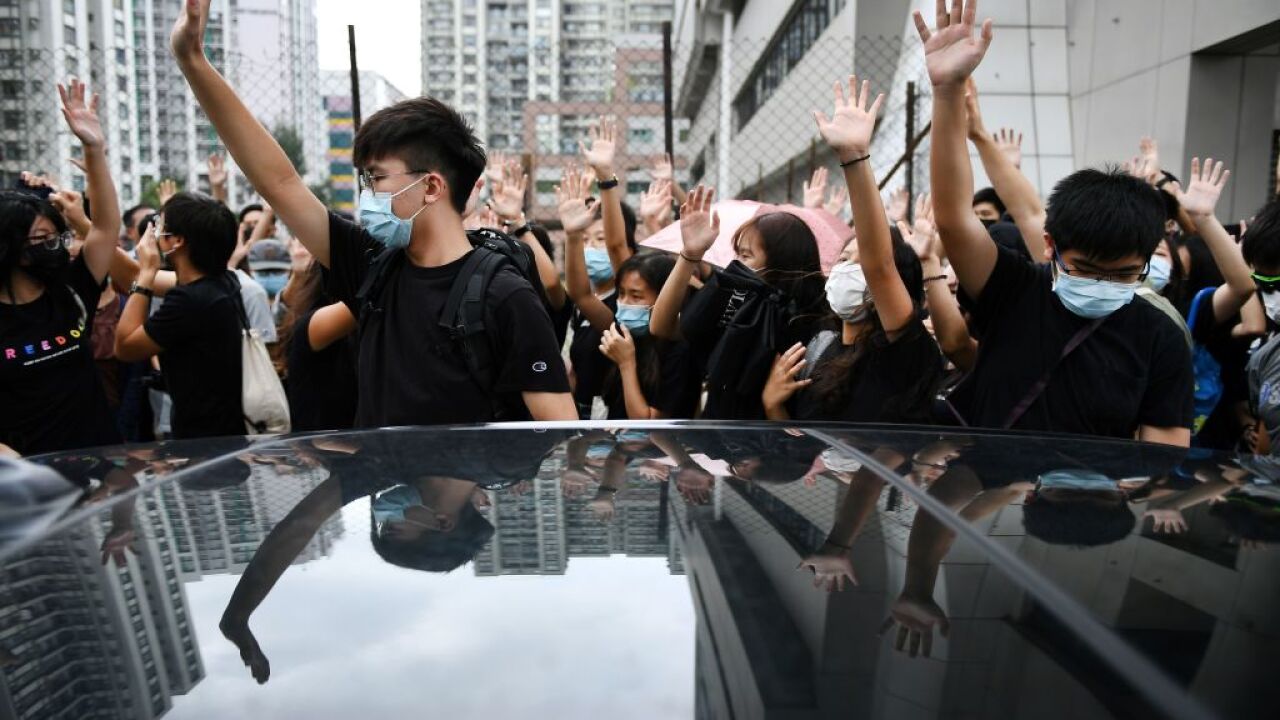 Protesters shout slogans as they gather outside the Eastern District Courts in Hong Kong on October 7, 2019, where the first protesters arrested for wearing face masks appeared in court. – Hong Kong protesters arrested for defying a new face mask ban appeared in court on October 7 following a violent weekend of unrest which saw bloody clashes with police and widespread vandalism that crippled the city’s train network. (Photo by Mohd RASFAN / AFP) (Photo by MOHD RASFAN/AFP via Getty Images)

A real-time mapping app that Hong Kong protesters have been using to track police movements is no longer available for download on iPhones.

Apple decided to take down HKmap.live from its App Store after complaints from several people in Hong Kong, the company said in a statement Thursday. The app had been used in ways that “endanger law enforcement and residents in Hong Kong,” it added.

“The app displays police locations and we have verified with [Hong Kong authorities] that the app has been used to target and ambush police, threaten public safety, and criminals have used it to victimize residents in areas where they know there is no law enforcement,” Apple said in an emailed response to CNN Business.

“This app violates our guidelines and local laws, and we have removed it from the App Store,” it added.

HKmap hit back against Apple on Thursday, slamming its removal from the App Store as a “political decision.”

“We disagree [with] Apple and Hong Kong police force’s claim that HKmap App endangers law enforcement and residents in Hong Kong,” the app said on Twitter.

Most of the content on the app is generated by its users, HKmap said, adding that moderators delete anything that tries to “solicit, promote, or encourage criminal activity.”

The App Store ban “is clearly a political decision to suppress freedom and human rights in Hong Kong,” it said.

It was not immediately clear whether people who have already downloaded HKmap can continue to use it. The app’s developer did not immediately respond to requests for further comment.

Apple’s decision came soon after Chinese state media criticized it for allowing HKmap to be downloaded.

On Tuesday, the official newspaper of China’s Communist Party published a harshly-worded commentary accusing Apple of “escorting” the protesters.

“The app developer doesn’t shy away from their intention of helping rioters navigate through the protests,” the People’s Daily said. “Are you trying to assist in crime?”

Beijing has taken an increasingly hard line on the Hong Kong protests, and on Wednesday slammed them as “violent and illegal.”

A spokesman for China’s foreign ministry declined to specifically comment on Apple’s decision to allow the mapping app, but said the unrest “threatens the safety of Hong Kong people’s life and properties.”

“Anyone that has conscience or a sense of justice should oppose it and resist it, rather than supporting or indulging it,” he added.

Foreign firms caught in the middle

Protests have been taking place in Hong Kong for months and dozens of foreign companies that do business in China have been caught up in the fallout.

The National Basketball Association was drawn into the controversy this week.

The American league is facing a ferocious backlash in China after Houston Rockets executive Daryl Morey tweeted support for the Hong Kong protests. That prompted all of the NBA’s official Chinese partners to suspend business ties with the league.