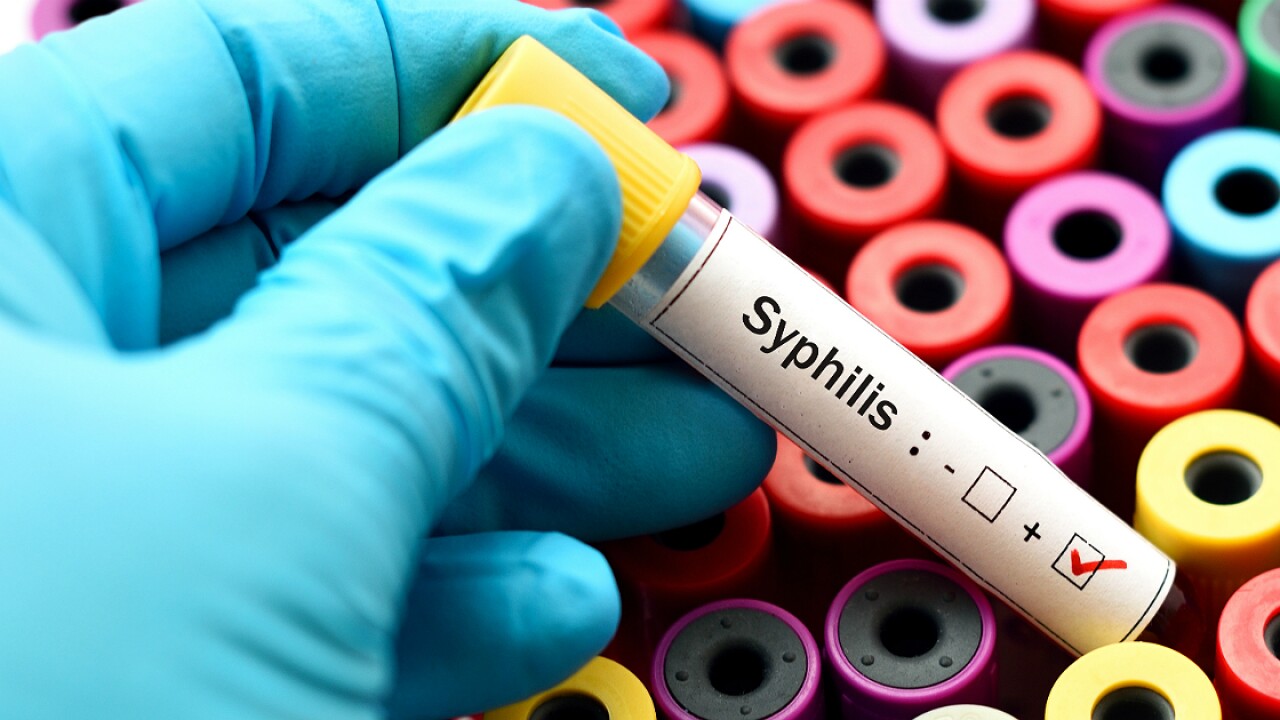 Health officials are raising alarm about a rise in STDs across the United States.

For the fifth consecutive year, combined cases of gonorrhea, chlamydia and syphilis have risen in the United States, according to a Sexually Transmitted Disease Surveillance Report from the US Centers for Disease Control and Prevention published on Tuesday.

“Combined they total 2.4 million infections that were diagnosed and reported just in last year alone,” said Elizabeth Torrone, a CDC epidemiologist who worked on the new report, adding that the combined number marks “the most cases” ever recorded since monitoring began in the United States.

A rise in the prevalence and incidence of STDs can come with serious public health consequences and concerns, including infertility, drug-resistant gonorrhea and congenital syphilis, which can cause infant death.

“Yet not that long ago, gonorrhea rates were at historic lows, syphilis was close to elimination, and we were able to point to advances in STD prevention,” Dr. Gail Bolan, director of the CDC’s Division of STD Prevention, wrote in the new report’s foreword.

“That progress has since unraveled. The number of reported syphilis cases is climbing after being largely on the decline since 1941, and gonorrhea rates are now increasing.

“Many young women continue to have undiagnosed chlamydial infections, putting them at risk for infertility.”

Possible factors driving this rise in STD cases, which vary depending on where you live, include a surge in people getting tested and cases being diagnosed and reported. There’s also a decline in people using condoms.

The new report found that rates of reported cases tended to be highest among adolescents and young adults.

“STDs cause a significant burden to the health care system — both in terms of direct medical costs for treating STDs as well as the personal cost for people who have an STD,” Torrone said. “As the STD epidemic continues to grow in the United States, the direct medical costs and the quality of life lost will just increase as well.”

Where cases are highest and lowest

Four STDs are monitored nationwide and nationally notifiable to the CDC: chlamydia, gonorrhea, syphilis and chancroid.

The states with the highest rates of cases were:

For each of those three diseases, rates in the District of Columbia were higher than all states.

“We’ve seen increases like the nation as a whole has seen increases. We’ve seen some recently bigger jumps and there’s a number of factors to which we attribute that,” said Michael Kharfen, senior deputy director of the HIV/AIDS, Hepatitis, STD and TB Administration at the DC Department of Health, who was not involved in the new CDC report.

One factor includes that testing services have been more easily accessible, which likely led to a large prevalence of cases being identified, Kharfen said. The DC Department of Health is continuing to invest in screening and testing efforts.

“We have been very aggressive in making STD screening available in lots of different both clinical and community settings, particularly among young people, who have a disproportionate number,” he said.

The new report, which analyzed STD data for the year 2018, found that a total of about 1.8 million cases of chlamydia infection were reported to the CDC last year, making it the most common notifiable condition in the United States.

The report also found that a nationwide total of 583,405 cases of gonorrhea were reported to the CDC last year, making it the second most common notifiable condition in the United States.

Rates of reported gonorrhea climbed 82.6% since a historic low in 2009, the report found.

Among other STDs included in the report, there has been overall declines in reported chancroid cases, in the prevalence of herpes simplex virus infections and in the prevalence of the human papillomavirus or HPV-related complications such as genital warts, which may be due to having access to a HPV vaccine, according to the report.

‘The most tragic consequences of this growing epidemic’

There has been a concerning rise in congenital syphilis cases, increasing each year since 2013, according to the report. Congenital syphilis is a severe, disabling and often life-threatening infection that occurs in infants when a pregnant mother who has syphilis spreads the disease through the placenta to her baby.

“One of the things that really stands out in this new report is the new and updated data on congenital syphilis, which is one of the most tragic consequences of this growing epidemic,” Torrone said.

“Most concerning in that overall case count — there were 94 infant deaths related to congenital syphilis,” Torrone said.

‘We have a real threat with drug resistance’

As the United States sees these steep increases in STDs, there also has been a slow decline in treatment options for one infection in particular: gonorrhea.

The threat of antibiotic-resistant gonorrhea persists across the United States and around the world. There have been a growing number of gonorrhea cases that are resistant to some of the antibiotics used to treat the infection.

Last year in the United Kingdom, a man was infected with a multidrug-resistant form of gonorrhea that was resistant to first-line treatment, a combination of the antibiotics azithromycin and ceftriaxone, according to Public Health England. The man had to be treated intravenously with the antibiotic ertapenem.

“With gonorrhea in particular, we have a real threat with drug resistance,” said Dr. Mark Mulligan, chief of infectious diseases at NYU Langone Health in New York and director of the NYU Langone Vaccine Center, who was not involved in the new CDC report.

“For most gonorrhea, we’re down to a single drug and if we lose that it could potentially become untreatable,” he said. “One need is to develop new antimicrobials for resistant organisms like gonorrhea. Another need or another strategy to combat the much broader problem of antimicrobial resistance is using vaccines to try to prevent the infections and therefore reduce the impact of drug resistance.”

Why STDs are on the rise

The report had some limitations, including that the data only included STD cases that had been reported to the CDC.

“In order for a case to be represented in the report, the infection actually needs to be diagnosed and reported,” CDC’s Torrone said.

“We know that there are many more infections that occur that just are not getting diagnosed and treated,” she said. “The intervention that we need is really to be able to increase access to routine screening as well as quality prevention.”

While the report documents the burden of these infections in the United States, it doesn’t pinpoint why rates are increasing — but Torrone had some ideas.

“I think it’s important to remember that part of the increase in cases is because we’re actually doing a good job getting people screened,” Torrone said, but the “steep and sustained increases” in cases are unlikely explained by just increased screening alone.

“Some of that increase in incidence may be due to change in sexual behaviors,” she said, such as decreases in people using condoms.

For instance, results from the 2017 Youth Risk Behavior Surveillance, published last year by the CDC, found that among sexually active high school students, the prevalence of using a condom during a recent sexual experience increased from 46.2% to 62.8% between 1991 and 2005 but then decreased from 62.8% to 53.8% between 2005 and 2017.

Condom use among men who have sex with men has also decreased, past research found.

Socioeconomic factors also can influence whether someone gets tested and treated in a timely manner.

The National Coalition of STD Directors said in a statement on Tuesday that “steep increases in STDs are largely due to federal, state, and local funding cutbacks.”

In 2012, for instance, 52% of state and local STD programs experienced budget cuts, amounting to reductions in clinic hours, contact tracing and screening for common STDs, according to the CDC.

“We have an STD crisis in the US because prevention programs were sold short for years,” David Harvey, executive director of the National Coalition of STD Directors, said in the statement.

“Our first line of defense is underfunded and overwhelmed, leaving Americans vulnerable to STD outbreaks, and that’s exactly what we’re seeing,” he said. “STDs have real health and human costs. Babies dying from preventable conditions, like congenital syphilis, is not an outcome we can accept. This is a heartbreaking symptom of our nation’s STD crisis. Without a radical shift in how we prioritize sexual health in the United States, we can only expect things to get worse.”

The coalition called for Congress to increase funding for CDC’s STD prevention services by $70 million. The coalition also called for the US Department of Health and Human Services to ensure that its Federal Action Plan on sexually transmitted infections, announced earlier this year, is finalized and implemented urgently.

The proposed release for the STI Federal Action Plan is 2020.

Overall the findings in the new CDC report came as no surprise to NYU Langone’s Mulligan.

“The reason it’s not a surprise is we’ve been seeing things moving in this direction for a few years and have known that this has been a challenging area where we have problems with diagnosis, problems with drug resistance in treatment, decay or erosion in our public health infrastructure,” he said, adding that there are possible solutions.

“In order to get this turned around again and get back to the much lower levels we had several years ago, it will be important to reinvest in the infrastructure that can enable those improvements.

“Another approach to turn this around is in fact prevention — and for many infectious diseases, vaccines have been the most important public health intervention to allow dramatic reductions in infection rates,” he said. “We don’t have a vaccine for syphilis, for gonorrhea, for chlamydia. Investment in vaccine development is another approach to help us get control of sexually transmitted diseases.”

It’s estimated that young people ages 15 to 24 acquire half of all new STD cases and 1 in 4 sexually active adolescent girls has an STD, according to the report.

“It’s alarming how they’re concentrated among young people, and to me it really speaks to the need for us to up our game in educating young people on not only the basics of sex education but sexuality education and relationship education too,” said Rob Stephenson, a professor and director of the Center for Sexuality and Health Disparities at the University of Michigan in Ann Arbor, who was not involved in the new CDC report.

“I think it also speaks to the quite urgent need for us to be a little bit more inventive in how we meet people where they are in STI testing,” Stephenson said.

“We should also think about new frontiers in STI testing. It’s now possible to test people in their own home, with self-collection kits and provide them with counseling via telehealth,” he said. “We just need to move away from traditional clinical models and be a bit more creative with how we reach young people.”