Turkey to send troops into northern Syria as US pulls out of area, White House says 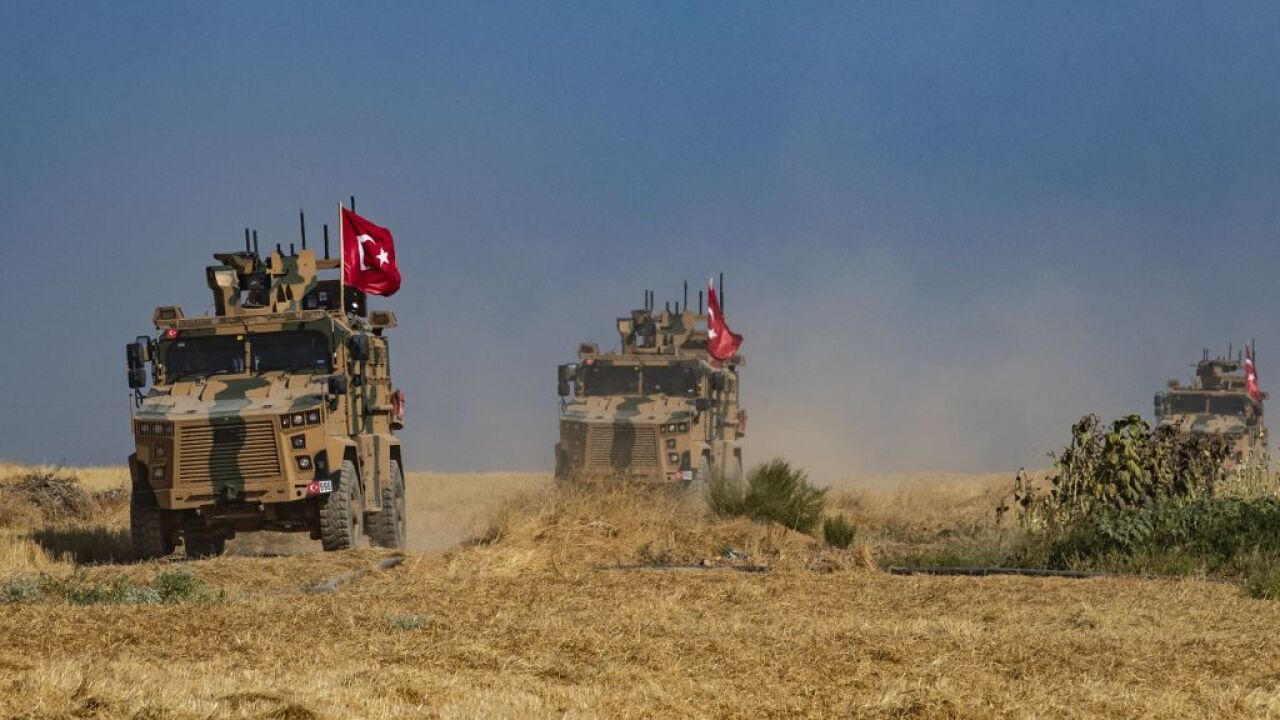 Turkish military vehicles, part of a US military convoy, take part in joint patrol in the Syrian village of al-Hashisha on the outskirts of Tal Abyad town along the border with Turkey, on October 4, 2019. – The United States and Turkey began joint patrols in northeastern Syria aimed at easing tensions between Ankara and US-backed Kurdish forces. (Photo by Delil SOULEIMAN / AFP) (Photo by DELIL SOULEIMAN/AFP via Getty Images)

In a remarkable announcement late Sunday night, the White House said that United States forces in northern Syria would move aside in advance of a planned Turkish military offensive.

The move marks a major shift in US foreign policy and effectively gives Turkey the green light to attack US-backed Kurdish forces. The group, long considered as among Washington’s most reliable partners in Syria, has played a key strategic role in the campaign against Isis in the region.

Following a phone call between US President Donald Trump and Turkish President Recep Tayyip Erdogan, the White House said that Turkey would soon begin a military offensive and US forces would not be involved in the operation.

“Turkey will soon be moving forward with its long-planned operation into Northern Syria,” a statement said. “The United States Armed Forces will not support or be involved in the operation, and United States forces, having defeated the ISIS territorial ‘Caliphate,’ will no longer be in the immediate area.”

The White House added Turkey would now be responsible for all captured ISIS fighters who are currently being held by US-backed Kurdish forces in northern Syria.

As of last month, the US said about 1,000 US troops were operating in northeastern Syria. Sunday’s statement did not specify if this constituted a full withdrawal of personnel from the country.

On Saturday, Erdogan announced Turkey had “completed our preparations and action plan” and was ready to launch a “ground and air operation” east of the Euphrates River. He said the goal was to establish “peace” by clearing the region of “terrorists.”

“It is maybe today or tomorrow the time to clear the way for (our) peace efforts … We will carry out a ground and air operation,” Erdogan said while addressing a meeting of the ruling Justice and Development (AK) Party in Kizilcahaman, a retreat town near the capital Ankara.

Nine trucks loaded with armored vehicles and a bus carrying military personnel were seen moving towards the Turkey-Syria border on Saturday, east of the Euphrates River, according to Turkey’s state-owned Anadolu Agency.

The convoy was sent to reinforce military units stationed at the border with Syria, the agency said

Turkey’s operation is aimed at clearing the US-backed Kurdish militia — the People’s Protection Units (YPG) — away from Turkey’s border.

Ankara regards the YPG as a terrorist group affiliated with the Kurdistan Workers’ Party (PKK), which has fought the Turkish state for more than three decades. But the US backs the YPG and credits the Kurds for helping defeat ISIS in Syria.

Turkey has been working with the US to establish “safe zones” that run along the Turkey-Syria border, but Anadolu reports that while Turkey welcomes the joint patrols, it has also said the US is not doing enough to set up the safe zone properly.

In a phone call with Trump, Erdogan expressed frustration over the US military’s failure to implement the agreement between the two nations, according to a readout of the call released by the Turkish Presidency. The two leaders agreed to meet in Washington next month on Trump’s invitation.

The US and Turkey have been working to establish the buffer zone, which the US calls a “security mechanism,” in northeast Syria as part of a bid to prevent a military incursion into the area that would target Syrian Kurdish groups, a potential operation that the US fears could undermine the fight against ISIS.

The US military’s involvement along the Syria-Turkish border includes manning observation posts as well as patrolling with Turkish troops in the area.

Trump’s decision to allow Erdogan to move forward with the operation and to move US forces out of the area goes against efforts by US officials to dissuade Turkey from carrying out a military intervention.

“Any uncoordinated military operation by Turkey would be of grave concern as it would undermine our shared interest of a secure northeast Syria and the enduring defeat of ISIS,” Pentagon spokesman Sean Robertson said recently.

He added that the US was committed to implementing the security mechanism, or safe zone, and contrary to Erdogan’s comments, said it was “on time, or ahead of schedule, in many areas.”

On Saturday, US Secretary of State Mike Pompeo told reporters that “we’ve made clear that this conflict shouldn’t be militarized.”

However, a US official familiar with operations in Syria told CNN that is “very likely” Turkey will try something soon. The official said it’s possible Ankara will start with a limited incursion to establish Turkish patrol bases on the Syrian side of the border with the goal of launching more ambitious clearance operations later.

“A response by the Syrian Democratic Forces (SDF) would play into Turkey’s narrative that they need to make the area safe to return refugees,” the official added.

From the Kurdish-led SDF’s perspective they feel that any unilateral action by Turkey on Syrian territory is a threat and they must respond.

“Allowing Turkish patrol bases now opens the door to permanent occupation and makes it easier for the Turkish military to attack the SDF later,” the official said.

In a scathing statement Monday, the SDF accused the US of “not abiding by their commitments” to avoid a military escalation.

“This Turkish military operation in northern and eastern Syria will have a large, negative impact on our war against ISIS and will destroy all the stability that has been accomplished over the past years,” the SDF statement said.

“We in the Syrian Democratic Forces will not hesitate for a moment to defend ourselves,” it continued, adding that it would call upon its allies to help defend from “Turkish aggression.”

Turkey’s presidential spokesperson Ibrahim Kalin tweeted Monday that, “We have no interest on anybody’s territory.”

He said the two aims of the safe zones in Syria are to clear “terror elements to ensure the safety of our border and the safe return of refugees.”

Turkey plans to resettle two million Syrians in a 30-kilometer-wide (18.6 miles) safe zone to be set up in Syria, stretching from the Euphrates River to the Iraqi border, including Manbij, according to Anadolu.