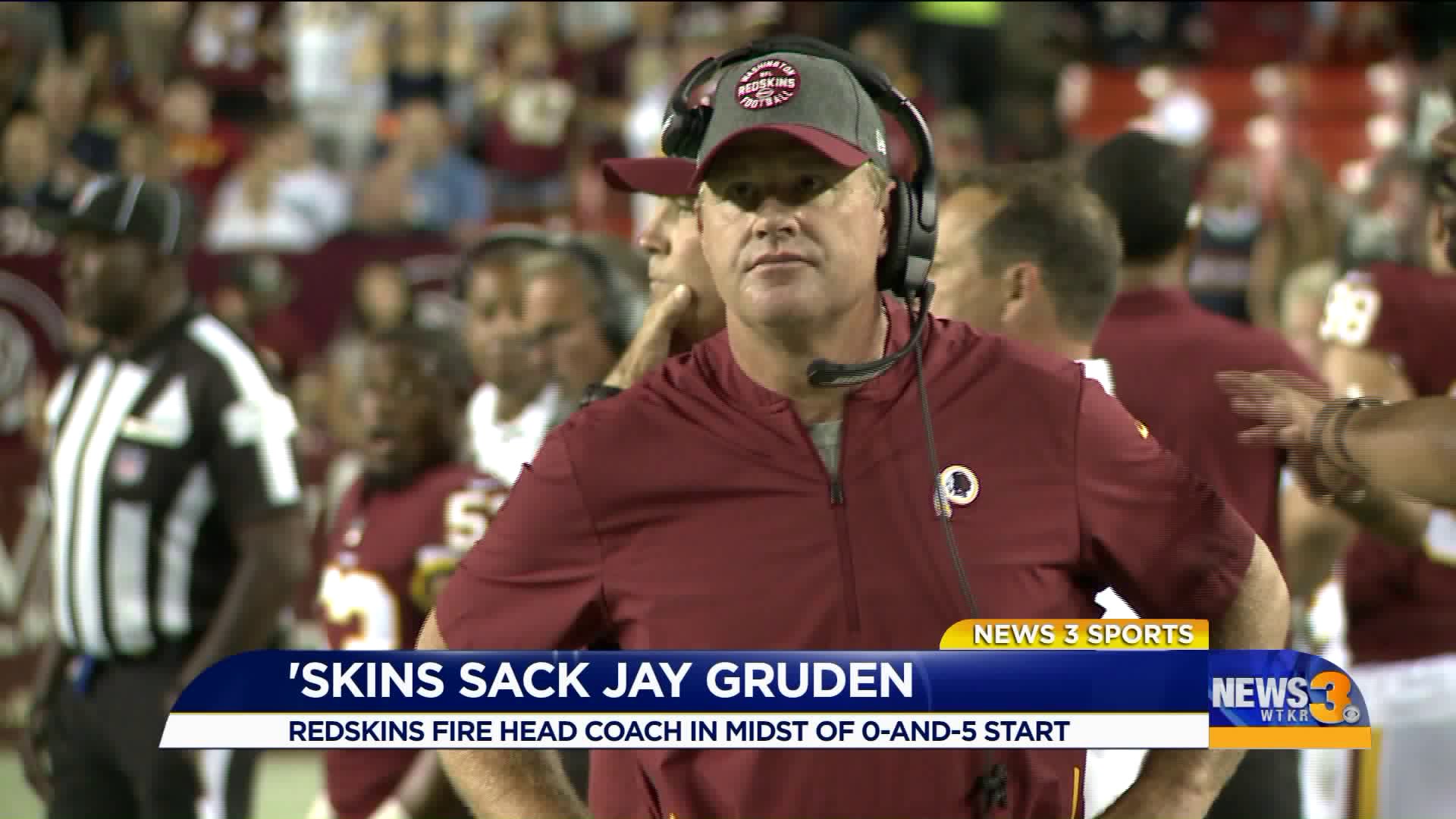 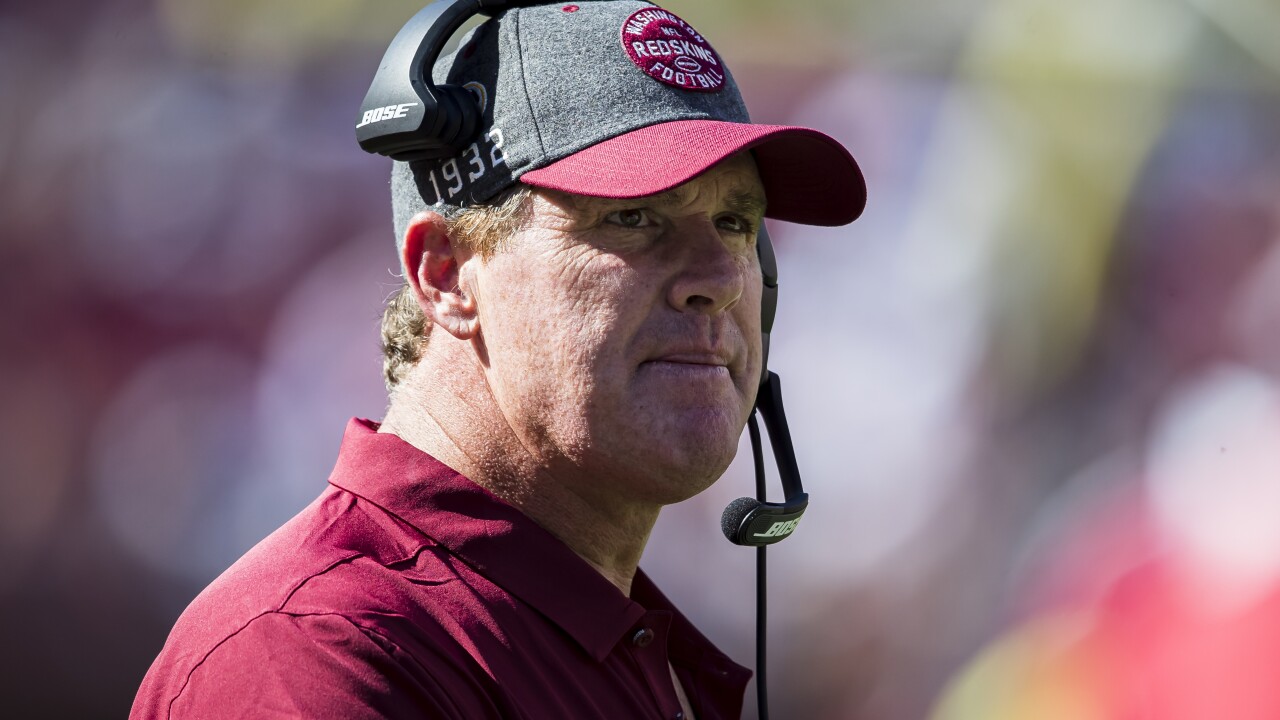 WASHINGTON – After six seasons as head coach of the Washington Redskins, Jay Gruden is out, according to a statement by the team.

Gruden’s firing comes after the Redskins lost to the New England Patriots Sunday, bringing their season to a 0-5 start. The ‘Skins have lost 11 of their last 12 games.

According to CBS Sports, Washington’s offensive line coach Bill Callahan will be taking over head coaching duties for the Redskins on an interim basis.

“The Washington Redskins announced today that they have relieved Head Coach Jay Gruden of his duties with the team. Gruden was informed of the decision early Monday morning by Owner Daniel Snyder and President Bruce Allen,” said the Redskins in a statement released to the media. “Moving forward we are committed to doing all that we can collectively as an organization to turn things around and give our Redskins fans and alumni a team they can be proud of in 2019 and beyond.” 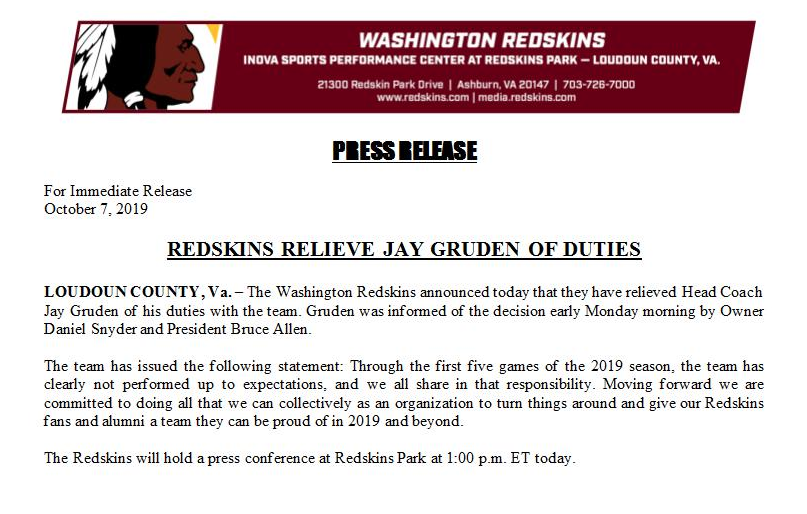 Gruden, who went 35-49-1 with the Redskins, only made the playoffs once while in Washington.

In 2019, not only was Gruden forced to make a quarterback change after Alex Smith is still unable to play following his gruesome leg injury last season, but the Redskins were without star left tackle Trent Williams (dispute with management) and highly-touted rookie Derrius Guice (knee injury).

Hired as the 29th bench boss in franchise history on January 9, 2014, Gruden went 35-49-and-1 (including playoffs) as Redskins head coach, including a 7-and-9 record in 2018 – a campaign during which his team lost six of its final seven games to endure back-to-back losing seasons.

Under Gruden, the Redskins won at least seven games in four straight seasons for the first time since a four-year streak from 1999-2002.

In 2018, the Redskins’ offense – with Gruden as the play-caller, ranked 29th in total offense, 28th in passing offense and 17th in rushing offense.

In 2015, Gruden led the Redskins to an NFC East Championship, posting a 9-7 record to complete the second “worst-to-first” turnaround in team history. Gruden became the sixth coach in team history to lead the Redskins to a playoff berth within the first two years at the helm, joining Ray Flaherty, Dutch Bergman, Dudley DeGroot, George Allen and Joe Gibbs.

Currently, the Redskins are in last place in the NFL East division, trailing the third-place New York Giants by two wins. The Cowboys and Eagles are currently tied for the division lead, with both sitting at 3-2 on the season.

The Redskins will play the Dolphins next Sunday in Miami.

According to the statement by the Redskins, there will be a press conference at 1 p.m. from Redskins Park, the team’s headquarters outside of D.C. in Ashburn, Virginia.

Download the News 3 App for updates on the Redskins.

UPDATE: Just-released odds from @SportsBettingAG on who will be the #Redskins head coach to start the 2020 season.#HTTR #NFL100 @WTKR3 https://t.co/bcg345ppnk pic.twitter.com/7FPtoZMscE