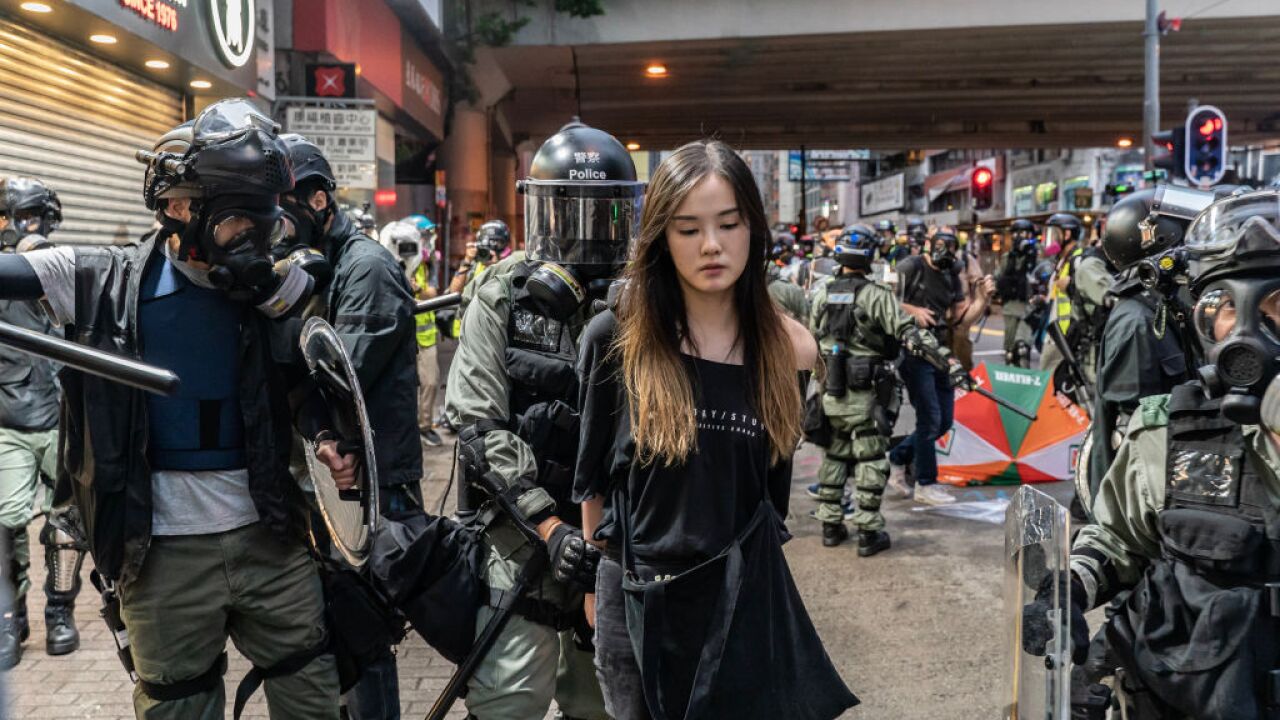 HONG KONG, CHINA – OCTOBER 6: A pro-democracy protester is arrested by police during a clash at a demonstration in Wan Chai district on October 6, 2019 in Hong Kong, China. Hong Kong’s government invoked emergency powers on Friday to introduce an anti-mask law which bans people from wearing masks at public assemblies as the city remains on edge with the anti-government movement entering its fourth month. Pro-democracy protesters marked the 70th anniversary of the founding of the People’s Republic of China in Hong Kong as one student protester was shot in the chest in the Tsuen Wan district during with mass demonstrations across Hong Kong. Protesters in Hong Kong continue to call for Chief Executive Carrie Lam to meet their remaining demands since the controversial extradition bill was withdrawn, which includes an independent inquiry into police brutality, the retraction of the word riot to describe the rallies, and genuine universal suffrage, as the territory faces a leadership crisis. (Photo by Anthony Kwan/Getty Images)

The Chinese military garrison in Hong Kong offered a rare public reaction in the face of taunts from protesters Sunday, as violence escalated across the city over the weekend.

Video from Hong Kong public broadcaster RTHK shows a yellow flag raised from atop a People’s Liberation Army (PLA) building in Kowloon Tong, in north Kowloon, warning protesters they could be prosecuted if they continued to approach the barracks. The flag appears to be similar to those used by police during protests.

Half a dozen personnel could be seen standing on top of the barracks shining flashlights at dozens of protesters below, who were aiming laser pointers and other lights at the building. The incident is believed to be the first known interaction between people inside the PLA barracks and protesters during 18 weeks of anti-government demonstrations.

Hong Kong police said they could not confirm or deny the incident. The PLA could not be reached for comment.

It comes as protests intensified over the weekend following Hong Kong Chief Executive Carrie Lam’s use of emergency powers to ban face masks at public gatherings.

Violent protests began Friday in opposition to the ban and stretched across the city throughout the weekend, with protesters throwing petrol bombs and police responding with pepper spray and tear gas. On Friday, a lone plain clothed police officer shot a 14-year-old boy in the leg after being attacked by protesters — the second time deadly force was used against protesters after an officer shot a protester during clashes on October 1.

“More effective measures to stop the violence and ease the unrest” must be used, Yang said, adding the central government supports the anti-mask law. 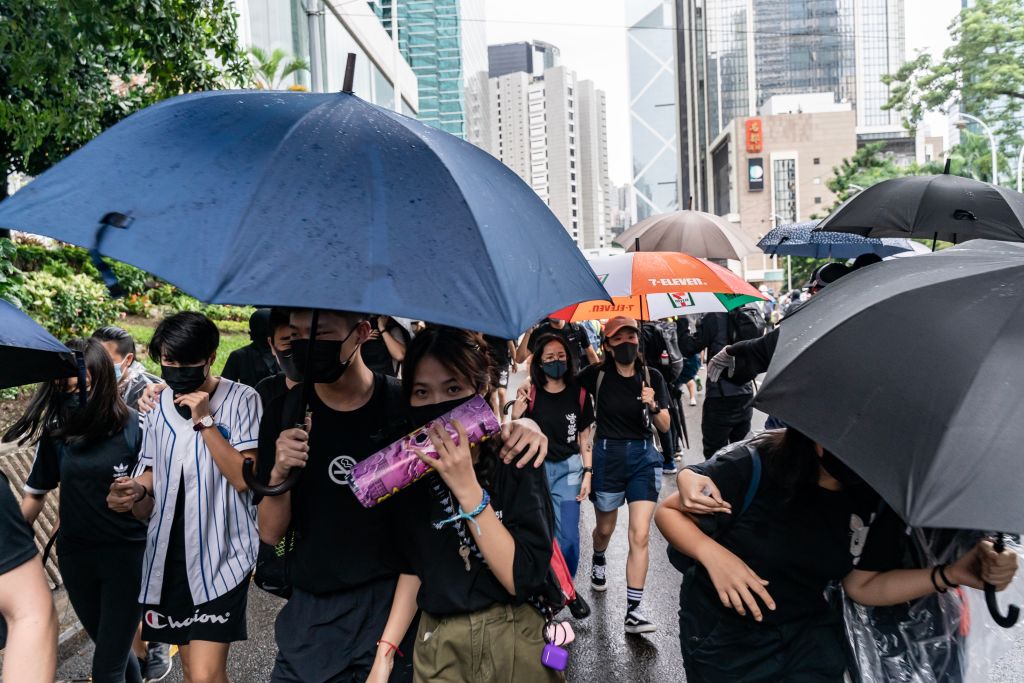 Use of colonial era emergency powers to institute the anti-mask law marks a significant escalation in the Hong Kong government’s handling of the now four-month long protests.

The emergency powers — which give the city’s Chief Executive effective carte blanche to make new laws as necessary in the instance of a severe breakdown of public order — have not been tested in court since Hong Kong’s return to China in 1997 and could be found unconstitutional under the city’s Basic Law, the de facto constitution, which guarantees rights such as public assembly and free expression.

Experts say the government’s move to invoke emergency powers as well as the protesters’ targeting of Chinese-owned business could move Hong Kong further toward a possible Chinese intervention.

“The very fact that the violence is intensifying in Hong Kong, both from the police against the protesters and the protesters are responding back in kind, I think, suggests that we are sort of reaching a tipping point in this,” said Malcolm Davis, senior analyst in Defense Strategy and Capability at the Australian Strategic Policy Institute. “They (Beijing) can’t let this go on indefinitely. They can’t let it continue to intensify.”

The Chinese military has had a presence in Hong Kong since the city was handed over from British to Chinese control in 1997. It is estimated that PLA garrison houses around 6,000 soldiers.

Under the city’s constitution, the Hong Kong government can request the assistance of the garrison “in the maintenance of public order and in disaster relief.”

Police and government officials have repeatedly denied any need to call on the military, even as the protests have taken an increasingly violent turn.

This has not stopped the rampant concern that at some point Beijing could crack down in Hong Kong.

In mid-August, China deployed large numbers of paramilitary personnel close to the border in Shenzhen. CNN teams on the ground saw uniformed members of the People’s Armed Police Force (PAP) with riot shields and batons, as well as numerous semi-militarized vehicles, stationed at the city’s Bay Sports Center.

A few weeks later China sent in fresh military troops to the Hong Kong garrison, saying it was part of the annual rotation of its personnel in and out of the territory.

However, US officials expressed skepticism that the rotation was routine, saying the Chinese troop movements, including the arrival of tactical vehicles and personnel carriers, puts Beijing’s forces into a more immediate position to crack down.

“This is the time to start worrying,” one US official told CNN at the time.

Any intervention from the PLA or the paramilitary PAP would likely be catastrophic for the city’s economy, analysts say, and could spark a mass exodus.

But the longer the protests go on, the weaker Chinese President Xi Jinping looks, Davis said. And Xi will be weighing up the economic and political costs of intervening in Hong Kong while it is fighting a bitter trade war with the US and a slowing economy.

“The one thing that might be driving his thinking is that he will look at (the 1989 Tiananmen massacre) and see how quickly international engagement recovered afterward, in terms of the economy,” Davis said.

While a Tiananmen-style crackdown is something most people in Hong Kong are eager to avoid, some of the more hardcore protesters have expressed otherwise.

As far back as August, some radical protesters said they welcomed a crackdown and were “ready for it” no matter the costs to the city and potentially the movement itself.

Unless both sides step back from the brink and some compromise is reached, the protests look likely to keep intensifying.

“I think that we are in the stage now, where things are going to slide towards some sort of military or People’s Armed Police intervention. And that could be a devastating situation for the protesters,” Davis said.