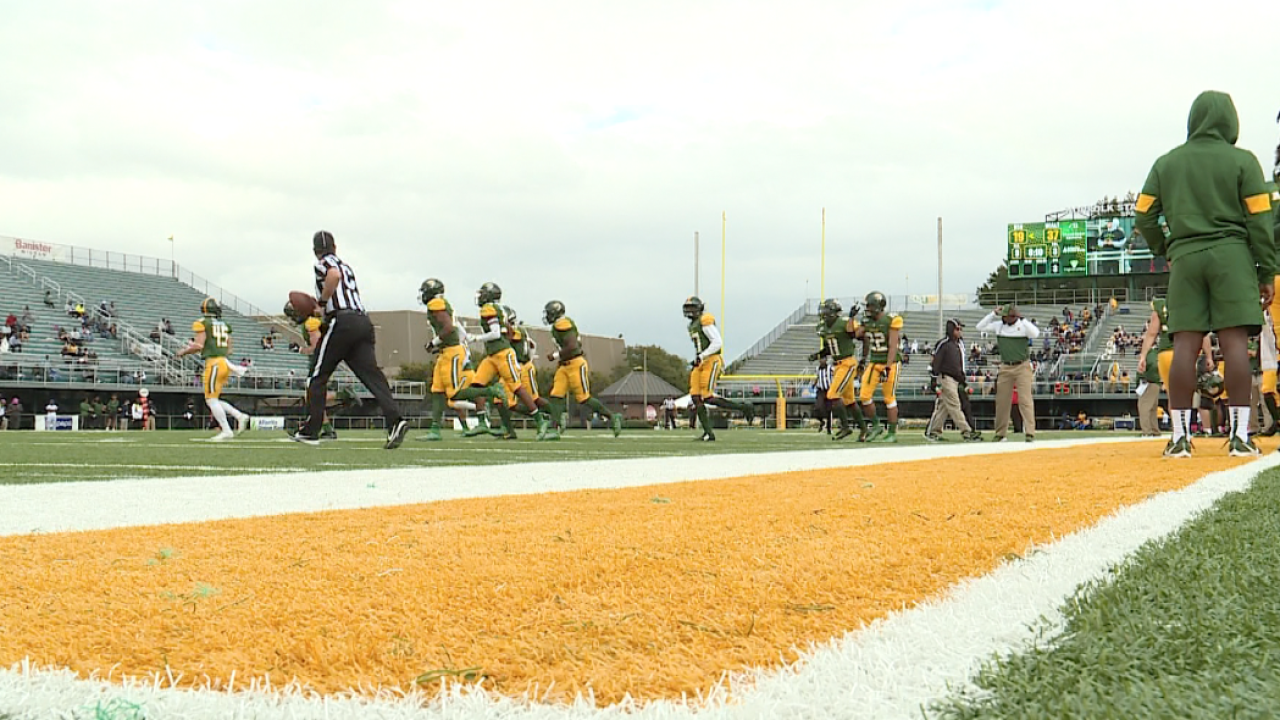 NORFOLK, Va. (NSUSpartans.com) – Jah-Maine Martin rushed for 199 yards and three touchdowns on 10 carries, part of a 594-yard day for the North Carolina A&T offense in the Aggies’ 58-19 win over Norfolk State on Saturday afternoon at Dick Price Stadium.

A&T also forced four turnovers on the day. The first of those, a Najee Reams interception of Juwan Carter on the game’s first drive, set up Martin’s first score, a 2-yard run less than three minutes into the game.

The Spartans also used a turnover to score their first points. Nhyre’ Quinerly stripped A&T quarterback Kylil Carter and Remy Feltes recovered at the Spartan 44. That led to Josh Nardone’s career-long 44-yard field goal at the 4:13 mark of the first quarter which drew NSU within 7-3.

But the Aggies scored the game’s next 30 points. After the ensuing kickoff, Martin went 67 yards for a score on the first play from scrimmage. NSU put together a nice drive after that score, but a red-zone interception by Alex Fumbah turned the ball back to the Aggies. They then drove 92 yards in nine plays before Kylil Carter threw a 5-yard TD pass to Quinzel Lockhart.

NSU fumbled on the following possession, and Carter hit Zachary Leslie on a 26-yard TD pass to give A&T a 27-3 lead.

Noel Ruiz tacked on a 24-yard field goal and Martin accounted for another one-play drive with a 68-yard TD burst to give the Aggies a 37-3 lead with 3:16 left before halftime.

The Spartans fought back with an eight-play, 75-yard drive to score just before halftime. Juwan Carter capped the march with a 2-yard TD pass to Justin Smith, their first scoring hookup of the season. The extra point was blocked, and A&T held a 37-9 lead at halftime.

The Spartans rode that momentum into the second half, taking the third-quarter kickoff and driving 75 yards in 12 plays for another touchdown. Juwan Carter scored on a 1-yard TD run on third-and-goal with 9:40 left in the third period.

Then on the following kickoff, Ryan Richter’s well-placed short kickoff found an opening in A&T’s return formation. NSU’s Stuart Anderson recovered the kick at the A&T 21, leading to Nardone’s 31-yard field goal at the 8:10 mark of the quarter that drew NSU within 37-19.

But the Aggies blunted NSU’s momentum when Leslie scored on a 68-yard TD catch-and-run on the first play of the next drive. The Aggies punts on NSU’s next two possessions and scored after both, as Kashon Baker and Jalen Fowler both notched 4-yard TD runs to push A&T’s lead to 58-19 early in the fourth.

For NSU, Carter was 24-of-44 for 252 yards with one touchdown pass, one TD run and three interceptions. Justin Smith made a career-high six catches for 53 yards and a score. Marcque Ellington added five catches for 66 yards.

The Spartans also got a big lift from freshman running back Rayquan Smith, who ran nine times for 75 yards and caught four passes for 33 yards in his first career action. He ripped off a 62-yard run on his first collegiate carry.

For the Aggies, Baker added 99 rushing yards on 14 carries. A&T finished with 410 rushing yards and 594 yards of total offense, averaging 11.0 yards per play. They became the first MEAC team to top 50 points against NSU since Bethune-Cookman (59) in 2015.

The Spartans are on the road for their next two games, beginning with a 1 p.m. matchup at Howard next Saturday.