Could London become a permanent home for the NFL? 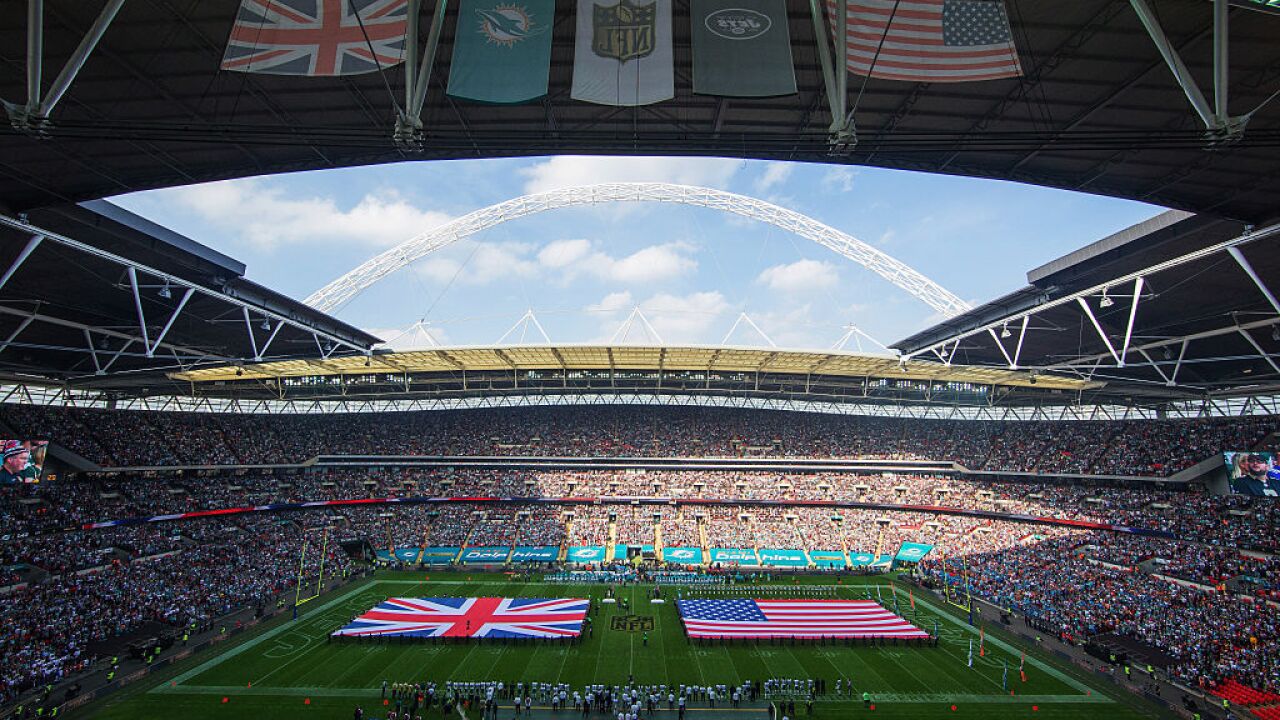 LONDON, ENGLAND – OCTOBER 04: A general view prior to the game between Miami Dolphins and New York Jets at Wembley Stadium on October 4, 2015 in London, England. (Photo by Jed Leicester – NFL/Pool/Getty Images)

Be it the towering, arced south stand, the roof rimmed with glass, or the golden cockerel that surveys proceedings from on high, Tottenham Hotspur’s new stadium has attracted many envious glances since opening its doors earlier this year.

But there’s a side to the north London venue that is yet to be exhibited to the world, with this weekend marking the big reveal as the Chicago Bears face the Oakland Raiders.

On top of its duties as a Premier League home ground, the stadium is also the first and only custom-built NFL venue outside the US — the secret weapon for a sport constantly seeking to expand its overseas presence.

How the 62,000-seat stadium switches from round ball to oval ball is a finely-tuned science.

One-and-a-half meters below the football pitch sits the artificial turf used in the NFL. The real turf, divided into three sections, sits on rollers that slide one pitch on top of the other. The process takes just 25 minutes and is powered by 68 electric motors, 168 wheels and 99 turf trays.

The vision of Spurs’ chairman Daniel Levy was a bold one, harnessing stadium technology not seen elsewhere in the world.

“It’s got unbelievable atmosphere, the acoustics are second-to-none, and from a parochial perspective, it’s something that is completely bespoke to ourselves.”

The NFL’s previous visits to the UK have been a makeshift job, with London’s Wembley Stadium — a football venue by design — hosting 20 games, and Twickenham — the home of English rugby — staging three.

But the Tottenham Stadium is built for purpose.

NFL crests adorn the artificial turf when it’s released from hibernation and the spacious locker rooms have the same look and feel as those back in the States. There is also a media center and a hosting area specifically for NFL games.

Luxury, of course, comes at a cost — at $1.3 billion, the stadium is the most expensive in Europe.

“I’ve played in a couple of new stadiums in the NFL and this one’s right up there with them in terms of how state-of-the-art it is. I’ve walked round the course and stuff like that and I think it will be an awesome place to watch a game.

“It’s the exact same [as being in America]. It’s a great surface to play football on.”

Since the NFL started hosting international games in 2007, much talk has been had over whether the league would welcome a London franchise, either with an expansion team or through an established team relocating across the Atlantic.

The Jaguars — whose owner Shahid Khan has invested interest in London as owner of Fulham football club — have committed to playing one overseas game a year as the designated “home” team and are often touted as the most likely candidate to up-sticks.

READ: NFL suspends Vontaze Burfict for the rest of the season

But it’s not necessarily to the players’ liking.

“I think it would be difficult,” wide receiver DJ Chark tells CNN Sport, “just because of traveling and scheduling games for the away team and the home team.

“If the home team had half a season here and half a season in America it might work, but then you have to think about the teams that have to travel over. The scheduling and the traveling … that’s the biggest thing.”

As far as a fan base is concerned, however, there’s no doubt that there’s an appetite for the sport in the UK; over 80,000 have packed into Wembley for NFL games in recent years.

A newly-launched NFL Academy in London also hopes to pique interest in the sport among British teenagers, as well as offering young athletes a route into American football.

“Spurs have been here since 1882 and have been in the business of bringing up young talent for years,” David Lammy, member of parliament for Tottenham, tells CNN Sport.”

“This stadium, Tottenham Hotspur as a club and the NFL is a huge catalyst for regeneration in this part of north London … I’ll do anything to see them convinced that they should open a franchise here in the UK and that this is the place to do it.”

But in the meantime, there’s a game to be played; 62,000 people in north London will be hoping that the Bears and the Raiders can put on a show as this billion-dollar investment begins to bear fruit.