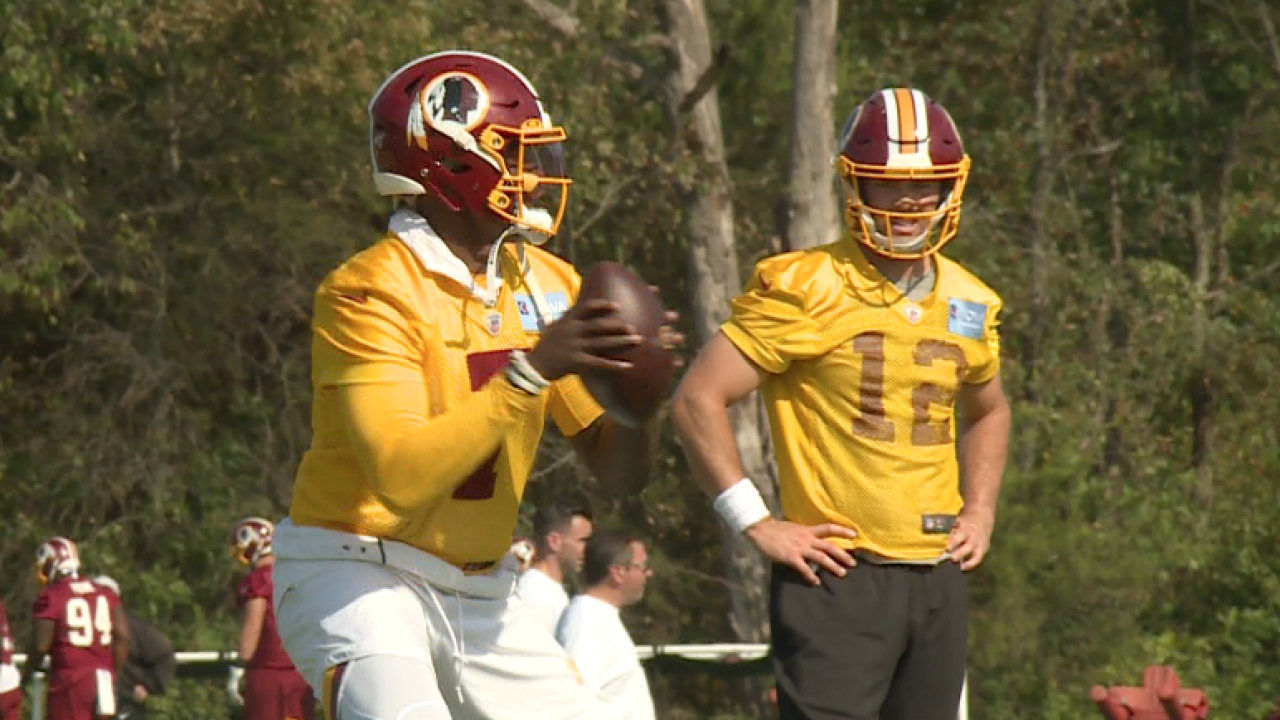 LOUDOUN COUNTY, Va. – Quarterback Case Keenum, who’s started every game for the Washington Redskins this season, was in a boot during Wednesday’s practice as he deals with discomfort.

The team had a limited practice Wednesday with seven-on-seven and a lot of walkthrough. Tomorrow, head coach Jay Gruden hopes to receive clarification on who he wants to start under center.

“I have to see some things for me to make the decision and that’ll come out here at practice tomorrow,” Gruden said. “Hopefully, after tomorrow’s practice I’ll have a good indication of who I want to play. So, yeah, in my mind I have a pretty good plan, contrary to belief.”

One common belief among sports analysts is that Gruden made a bad coaching decision by putting Haskins in during Sunday’s loss to the New York Giants. When asked about whether throwing Haskins into a quarterback competition will hinder the quarterback’s development, Gruden says it won’t have an effect on the rookie.

“It should not hinder his development whether or not he gets thrown out and doesn’t perform up to speed, or whether he sits for a year and learns a systems and continues to see how to prepare,” Gruden said. “It’s not the end of the world if he doesn’t play another snap. If he starts every game and doesn’t do very well, it’s good experience for him.

“You can argue both sides of the coin right here. No matter what we do with him, we’re going to be wrong, so it doesn’t really matter. My view is that I’ve got to do what’s best for him and what’s best for this football team and what I think is best. We’ll decide that here shortly.”

Despite being with the Redskins since 2014, McCoy’s only started six games, including two last season before he went down with an injury. Last week marked McCoy’s first time practicing since training camp, when that lingering injury sidelined him once again.

While McCoy has passed the QB injury torch to Keenum, Gruden didn’t rule out Keenum for this Sunday’s game, and he could continue taking reps if he’s able to tolerate playing on the injury.

Regardless of who’s gets the start, it won’t be easy to pick up a win Sunday when the Redskins host the New England Patriots at FedEx Field.