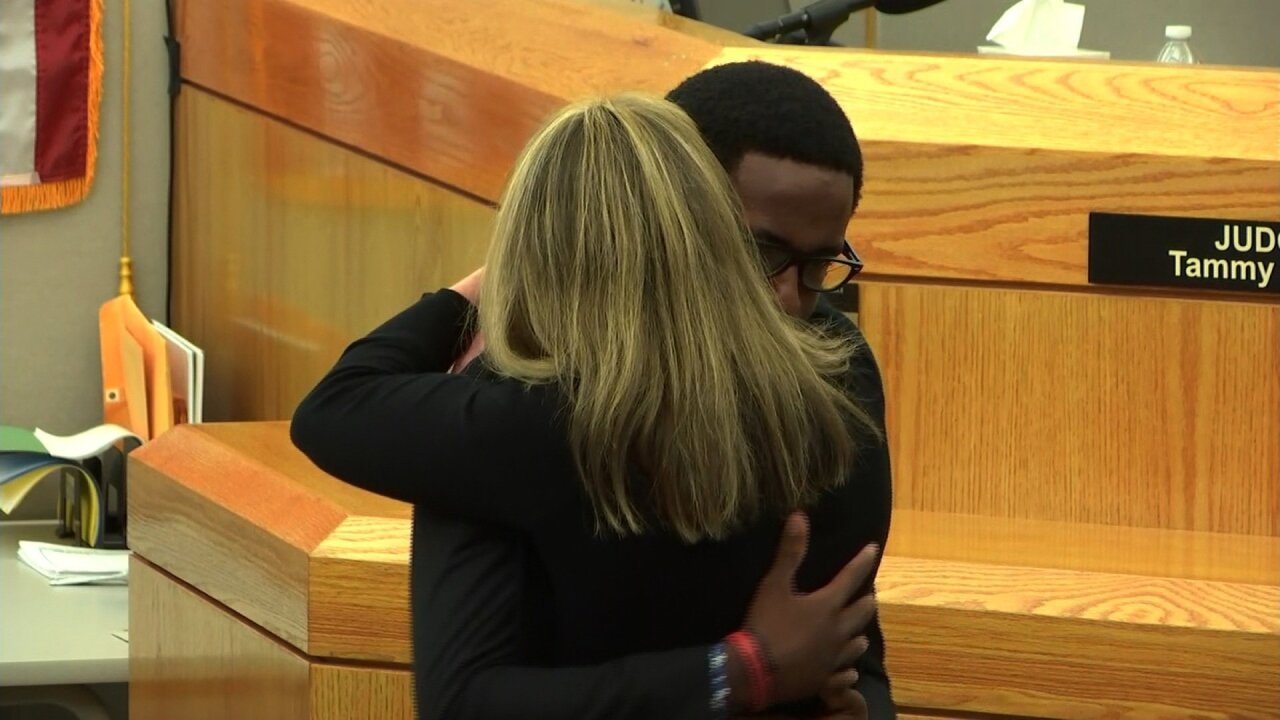 Brandt Jean stepped down from the witness stand and hugged Amber Guyger tightly on Wednesday. He said he didn’t want her to go to prison, and that he forgave her.

His voice cracking on the witness stand, Brandt Jean turned to the judge and asked to hug the woman who killed his brother.

Brandt Jean stepped down from the witness stand and hugged Amber Guyger tightly on Wednesday. He said he didn’t want her to go to prison, and that he forgave her.

Jean stepped down from the witness stand and hugged Guyger tightly on Wednesday. He said he didn’t want her to go to prison, and that he forgave her.

Guyger fatally shot Botham Jean in his own apartment in 2018. She said she mistook the unit for her own and believed he was an intruder. On Tuesday, a Texas jury found her guilty of murder.

Over the past two days, Jean and Guyger’s families have testified at her sentencing hearing.

Before Brandt Jean spoke, prosecutor Jason Hermus whispered to him and he nodded. The 18-year-old adjusted himself in his chair and took a deep breath.

His words were slow and deliberate.

“I don’t want to say twice or for the hundredth time, what you’ve, or how much you’ve taken from us. I think you know that,” he said. “But I just –.”

He paused, adjusted himself again.

“If you truly are sorry — I know I can speak for myself — I, I forgive you,” he told Guyger.

“And I know if you go to God and ask Him, He will forgive you,” he said.

“I love you just like anyone else,” he said. “I’m not going to say I hope you rot and die, just like my brother did. … I personally want the best for you.”

Like his brother, Brandt was raised in the Church of Christ in St. Lucia, where his family lives. His mother, Allison Jean, gave all of her three children Biblical middle names. Botham Jean’s middle name was Shem, who was a son of Noah. Brandt’s middle name is Samuel, after a prophet in the Old Testament.

“I think giving your life to Christ would be the best thing that Botham would want you to do,” Brandt Jean said.

“Again, I love you as a person, and I don’t wish anything bad on you,” he told Guyger.

He wiped a tear from his eye and stepped off the witness stand to hug her.

Sobs could be heard in the courtroom as the two hugged. Kemp wiped tears from her eyes.

Click here for our full coverage on the fatal shooting of Botham Jean.