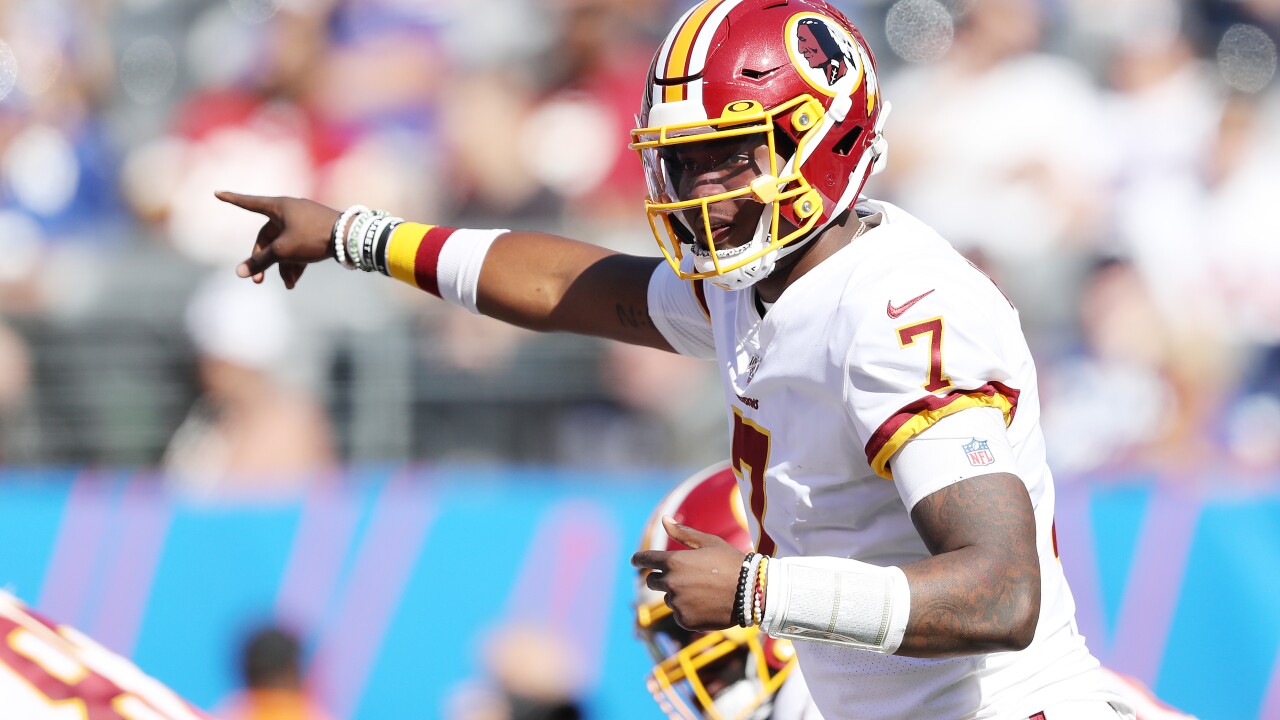 LOUDOUN COUNTY, Va. – The 0-and-4 Washington Redskins have a quarterback competition on their hands.

After Case Keenum was pulled in the first half during Sunday’s game against the New York Giants, rookie Dwayne Haskins made his NFL debut.

Neither quarterback impressed. Keenum threw an interception, and Haskins threw three interceptions, in a game where zero touchdowns were scored.

On Monday at the Redskins’ practice facility, running back Chris Thompson talked about the biggest difference between the two quarterbacks, which comes down to cadence.

“Guys kind of get the plays out different, just kind of run the huddle a little differently,” Thompson said. “Dwayne talks a lot faster, so for the offensive line it’s being able to get used to his snap count and stuff, and we’ve been able to just work in with him during OTAs, training camp and everything. I think that’s really the biggest difference.”

In Haskins’ first drive of Sunday’s game, he managed to get his team into the red zone. He picked up a first down at the one-yard line on a 14-yard scramble, and while getting up after the play was fired up and egged on the rowdy Giants crowd.

“It’s good to see stuff like that, especially for a young guy,” Thompson said. “You want to do whatever you can, especially in a situation like that, to bring some energy to our offense and just try to give us a boost.

“For a quarterback I think that’s him showing that he’s willing to go all out and give it his all for us to try to win a game, and I think that was huge for him. Obviously, he’s a young guy so we want him to also be smart out there because he’s gonna be the future here, so we also want him to protect himself as well. We like to see that energy from him.”

While Haskins in the future of the program, it doesn’t mean he’s ready now, and head coach Jay Gruden made that clear after Sunday’s loss.

“I don’t care where you’re drafted, when you’re drafted. You need to earn that,” Gruden said. “He’s gotta come in here and perform when he’s asked to perform. If I feel like he gives us the best chance to win against New England I’ll put him in there.

“That’s the way it is at every position, with everybody. You’re just not handed the keys because of where you were drafted, you’ve gotta earn the right.”

“If he’s gonna be the guy I don’t think he’s gonna be nervous or anything like that at all,” Thompson said. “We’ve got the defending champs coming in here, so we know what’s ahead of us, and I think he’d be excited for the opportunity to step up, being able to play against Tom Brady as someone he looks up to.

“I know it would mean everything for him to say, ‘I beat Tom Brady in my first start,’ but we don’t know what’s gonna happen.”

Sunday’s game against the Patriots is a 1p.m. matchup at FedEx Field.