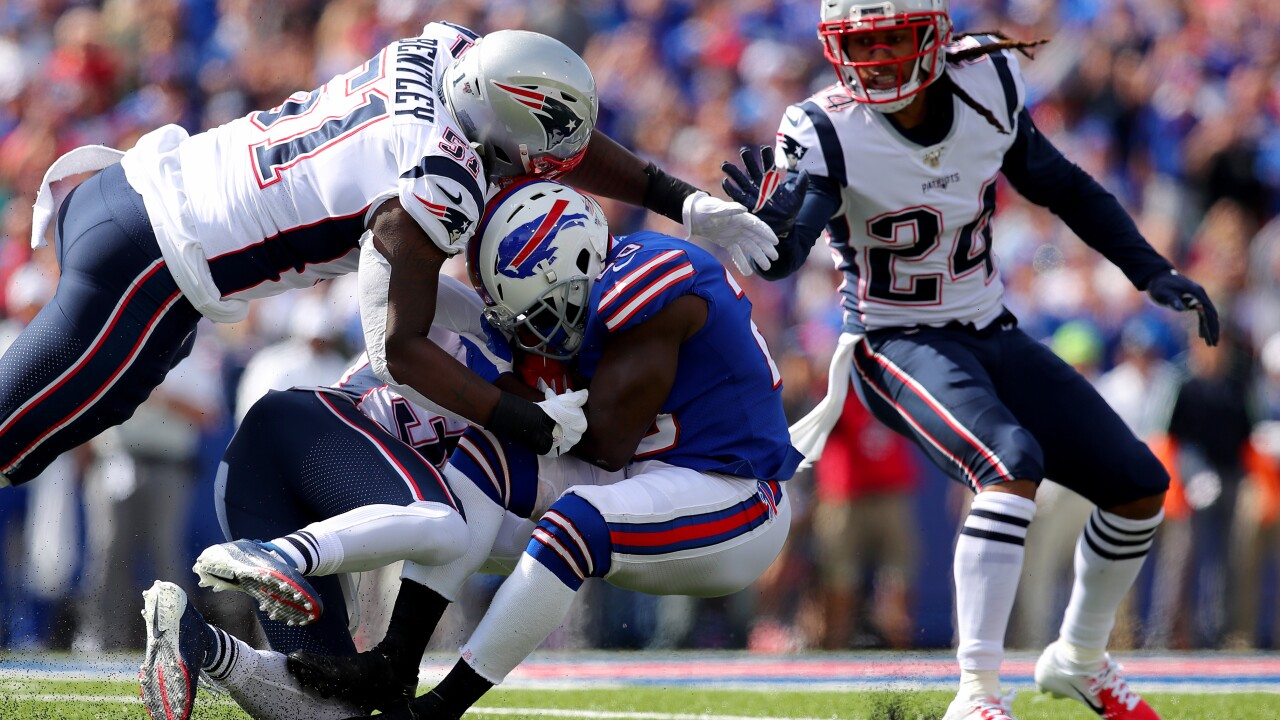 Frank Gore #20 of the Buffalo Bills gets tackled by the New England Patriots. (Photo by Brett Carlsen/Getty Images)

Frank Gore #20 of the Buffalo Bills gets tackled by the New England Patriots. (Photo by Brett Carlsen/Getty Images)

NEW YORK (NFL Communications) – Courtesy of NFL Communications, here’s a look at seven statistical highlights from games played at 1:00 p.m. and 4:00 p.m. ET on Sunday, September 29, the fourth week of the 2019 season.

–All 13 completed games in Week 4 have featured at least one starting quarterback age 26 or younger.

With two games remaining, a total of 50 games have featured at least one starting quarterback age 26 or younger in 2019, surpassing the 1987 season (48) for the most such games through four weeks of a season in NFL history. ​

–Tampa Bay linebacker SHAQUIL BARRETT had a sack, forced fumble and interception in the Buccaneers’ 55-40 win over the Los Angeles Rams.

Barrett has nine sacks on the season and tied MARK GASTINEAU (1984), KABEER GBAJA-BIAMILA (2001) and Pro Football Hall of Famer KEVIN GREENE (1998) for the most sacks through their team’s first four games of a season since 1982 when the individual sack became an official statistic.

–Carolina quarterback KYLE ALLEN completed 24 of 34 passes for 232 yards and zero interceptions in the Panthers’ 16-10 win at Houston.

Allen joins CARSON WENTZ (2016) as the only quarterbacks in the Super Bowl era to go 3-0 with zero interceptions in their first three career starts.

–Cleveland running back NICK CHUBB rushed for 165 yards and three touchdowns, including an 88-yard touchdown run, in the Browns’ 40-25 win over Baltimore.

Chubb – who had a 92-yard touchdown run in Week 10 of the 2018 season – joins BOB HOERNSCHEMEYER (two touchdown runs from 1946-47) and CHRIS JOHNSON (three from 2008-09) as the only players in league annals with at least two touchdown runs of 85 yards or more in their first two seasons.

–Oakland tight end DARREN WALLER had seven catches for 53 yards in the Raiders’ 31-24 win at Indianapolis.
Waller, who has 33 receptions on the season, tied ANTONIO GATES (33 in 2007) for the most receptions by a tight end through his team’s first four games of a season in NFL history.

–Other notable performances from Sunday include: