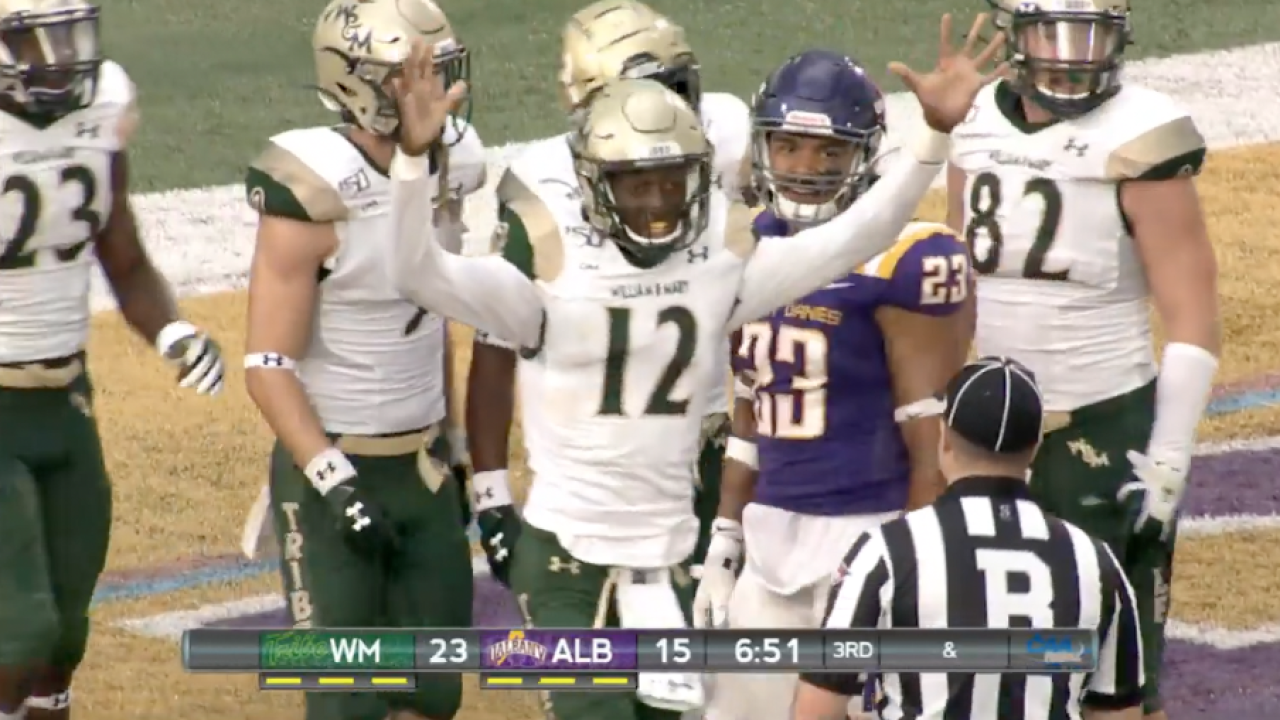 ALBANY, NY (TribeAthletics.com) – The William & Mary football team nearly rallied back from a 15-point deficit in the closing minutes but fell at UAlbany, 39-31, in its conference opener on Saturday night.

After a 6-yard touchdown run by UAlbany’s (3-2, 1-0) Kari Mofor with 1:44 remaining gave the Great Danes a 39-24 lead, the Tribe (2-3, 0-1) quickly answered with an 83-yard touchdown strike from quarterback Kilton Anderson to wideout Kane Everson on the first play of the ensuing drive.

The Tribe led 24-15 following a 56-yard touchdown run by quarterback Hollis Mathis with 6:51 left in the third quarter, but UAlbany countered with 24 unanswered points before W&M’s comeback bid.

Tribe Standouts
In addition to his 83-yard touchdown, Everson totaled a career-high seven catches for 121 yards.

Bronson Yoder posted a 98-yard kickoff return for a touchdown – his second of the season – while Kris Hooper connected on a school-record 54-yard field goal. Both big plays helped W&M take a 17-12 lead into the locker room at halftime.

Anderson came off the bench in the fourth quarter and led the Tribe’s final three possessions, completing 5 of 10 passes for 124 yards with the touchdown strike to Everson.

Although the Great Danes scored on all six of its trips into the red zone, W&M limited UAlbany to just two touchdowns and four field goals.

The Tribe posted a season-high 10 PBU.

The Opposition
Quarterback Jeff Undercuffler completed 27 of 44 passes for 291 yards with three touchdowns, while Mofor rushed for 95 yards on 24 carries with a touchdown.

Up Next
The Tribe will return to action when it hosts No. 8/13 Villanova at Zable Stadium next Saturday at 3:30 p.m. Tickets are available by clicking here or by calling the Tribe Ticket Office at 757-221-3340.