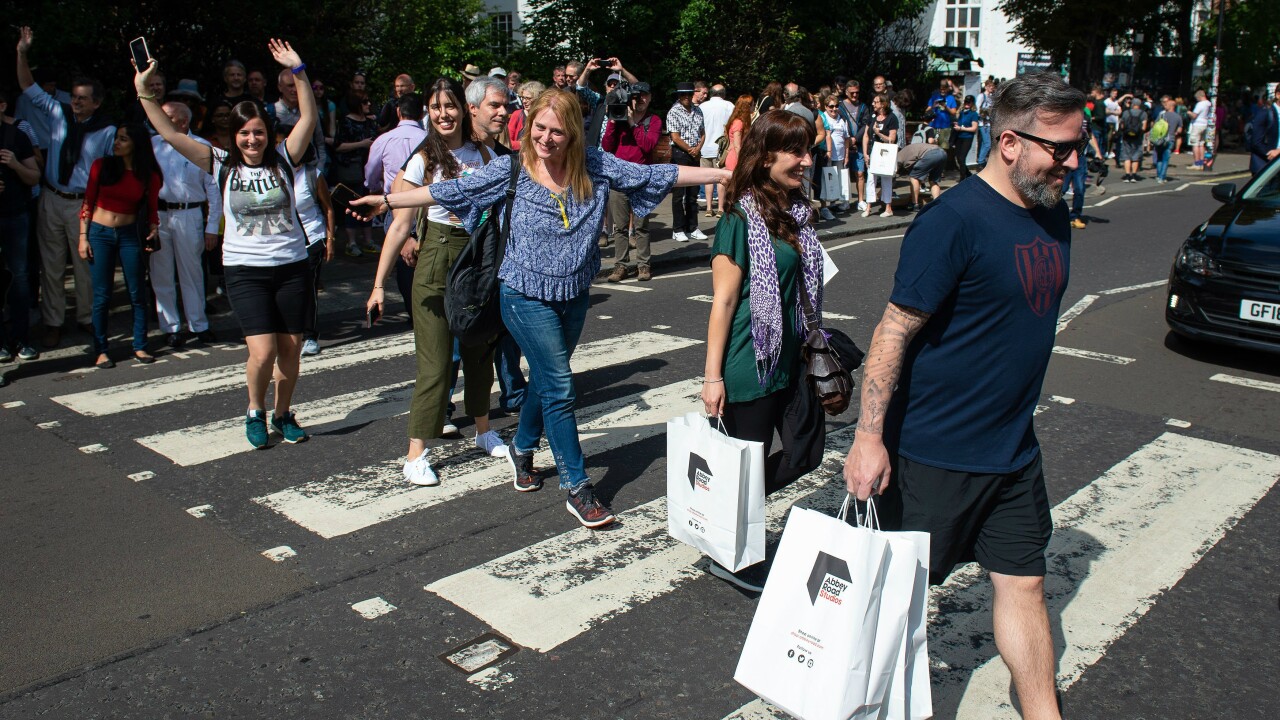 Mark Kramer is a huge Beatles fan. Just hours after stepping off his overnight flight from Florida to London, he is not bleary-eyed but brimming with energy as he savors his time at the world’s best-known pedestrian crossing.

Beside the streaks of white paint that mark the zebra crossing on Abbey Road — a site protected since 2010 for its cultural and historical importance — he rattles off Beatles facts, talks about the band’s musical journey and grows ever more excited.

Named after the street where it was recorded, it got mixed critical reviews but was an immediate commercial hit, topping the charts in the UK for 17 weeks and the US for 11, and selling 4 million copies in just six weeks.

It would prove to be the last studio album the group made together (“Let it Be,” which came out in 1970, had already been recorded), as John Lennon had broken the news to his fellow band members that he was leaving shortly before its release.

To mark the special occasion, an anniversary edition of “Abbey Road” will be re-released on September 27. Produced by Giles Martin, whose father, George, was the Beatles’ friend and producer, it will contain out-takes and additional material.

Giles Martin told CNN that his father thought that “Abbey Road” would be the group’s final album. He added: “I think they (The Beatles) knew things were changing. I think they were looking for a way out and they had all become more individual. Because creative people want to be creative and they all wanted to do different things.”

The otherwise unremarkable tree-lined street in the upscale London neighborhood of St. John’s Wood lends its name to the 1969 album. Half a century on, “Abbey Road” continues to grip music lovers the world over: on the September afternoon that CNN visits, tourists from Puerto Rico, Italy, the Philippines and the US are all milling around the crossing.

Most of them seize the opportunity to walk out into the street and try to recreate the famous album cover — one suspects to the annoyance of the drivers whom they keep waiting.

But this much-loved photograph of the four band members strolling across the road — taken from a stepladder by Iain Macmillan, a friend of John Lennon and his wife, Yoko Ono — might never have happened. The album was originally going to be called “Everest,” after a brand of cigarettes. If it had been, tourists would now have a very different journey on their hands.

Related: Fans flock to Abbey Road on the 50th anniversary of the Beatles’ classic photo

Far from the Himalayas, Kramer, 40, an engineer from Orlando, Florida, is on a short trip to London with his wife, Vanessa, and tells CNN: “I’ve always wanted to go and walk the cross-walk like a million other tourists.

“And I am huge Beatles fan — I own everything they’ve ever recorded. No great memorabilia, just the music. I think that’s the most important piece of memorabilia I could possibly have.”

Referring to the album cover, he jokes that the trees have grown “a little bit” since 1969 and that he cannot see a Volkswagen Beetle — the car in the background of the photo.

Others are more familiar with the lay-out of the road. Tito Maffeo, 26, from Rome, is with his fellow Italians Marco Vatellone and Matteo Arena. Maffeo, who used to live nearby, says: “It’s a lovely place to be. It’s great to see lots of people coming here for a sort of pilgrimage.

“I am not a Beatles fan, but I have to reckon what they actually did for music history.”

Karen Abramson, a photographer who grew up in the Beatles’ home city of Liverpool, is much more of a Beatles groupie. She has an original copy of “Abbey Road,” has met Paul McCartney and even owns a signed guitar of his — which none of her kids are allowed near.

After posing for a photo on her first visit to Abbey Road, she tells CNN: “I am here today because I just couldn’t resist stopping the traffic on Abbey Road to have a photograph…

“I’m a ’60s’ chick, I grew up in Liverpool at the time of the Beatles… I went to stage school across the road from where they were at school. So, the Beatles mean a lot to me.”

Despite her enthusiasm, she acknowledges that the crossing does not do it for everyone: “It’s so famous, but my friend lives here and she says it’s the most annoying crossing in the world because you can’t go anywhere, you can’t drive anywhere.”

Richard Porter, a mega-fan who has run tours called “London Beatles Walks” since 1992 and has met every Beatle except John Lennon, knows Abbey Road better than most.

On his weekly tours, which have spiked this year because of the anniversary celebrations, he has witnessed members of his group propose to their partners mid-crossing — so far to 100% success.

He has also seen people lie down in the middle of the road and others walk across naked, as the Red Hot Chili Peppers on the cover of their “Abbey Road EP.”

One of the guide’s favorite stories involves a North Korean tourist who had managed to defect to South Korea, where he discovered the Beatles and got hooked. Porter says: “When he got to Abbey Road he just burst into tears — it was too much for him. (It was) the symbol of freedom I suppose.”

Porter added: “Abbey Road is the place that everybody wants to see…You can’t do a Beatles tour in London without seeing Abbey Road.

“It’d be like doing the royal tour and not doing Buckingham Palace.”