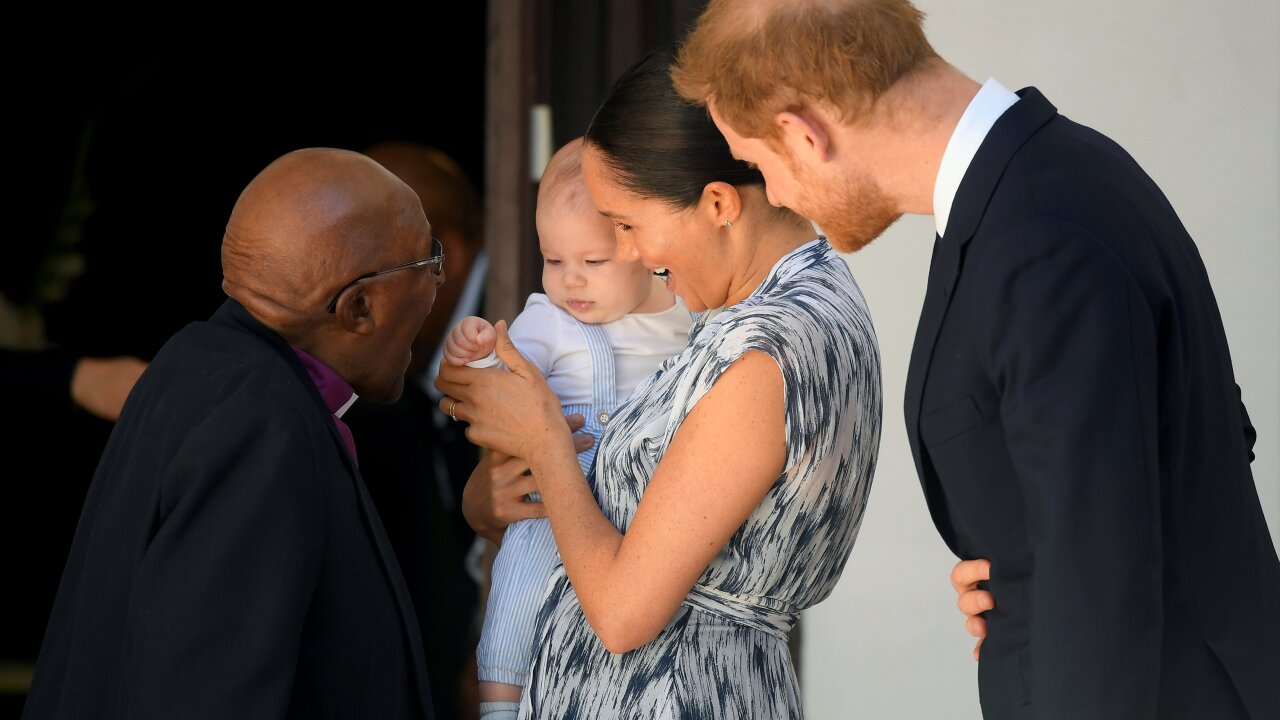 The baby appeared to hit it off with retired Archbishop and Nobel laureate Desmond Tutu. 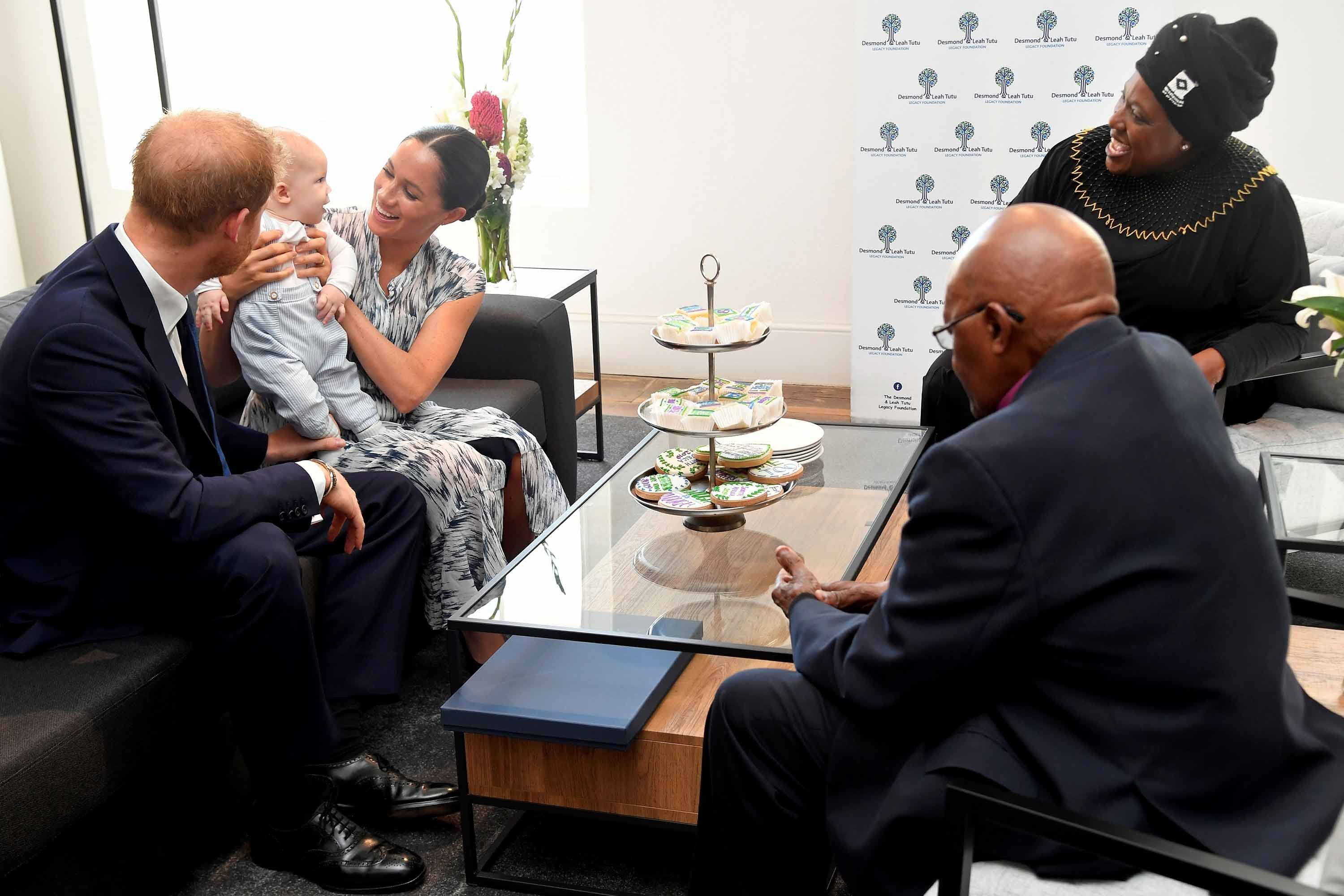 Britain’s Duke and Duchess of Sussex brought their son Archie to his first official engagement on Wednesday — a meeting with Nobel laureate and retired Archbishop Desmond Tutu.

The Sussexes are midway through a 10-day trip to southern Africa on behalf of the UK government.

Footage posted to the official Sussex Royal Instagram account first revealed the much-anticipated moment — to the delight of royal fans around the world.

Baby Archie could be seen being cradled by his mother Meghan as the family of three walked down a corridor to meet Tutu and his daughter, Thandeka Tutu-Gxashe.

Beaming from ear to ear, Meghan cooed “here we go” at the bouncing baby boy in her arms while proud father Harry looked on in delight.

Harry then started making sounds as the family continued on to the meeting, prompting a squeal of amusement from his young son.

Once welcomes were taken care of, the group went inside and sat down on sofas surrounding a coffee table laden with an impressive display of snacks.

The group shared a laugh over the number of cameras clamoring to get shots of the young royal. Harry quipped that “he is used to it already,” according to the UK’s PA Media news agency.

Tutu-Gxashe joked, “You like the ladies,” to the baby, adding: “He’s going to be a ladies’ man.”

During the meeting — which lasted roughly half an hour — PA Media also reported that Tutu said he was “thrilled” by the “rare privilege and honor” of meeting the young British royals.

Wednesday’s meeting was not the first time Prince Harry has met the 87-year-old retired archbishop.

In 2015, he presented the South African statesman with the Insignia of an Honorary member of the Order of the Companions of Honour on behalf of the Queen, recognizing his services to UK communities and International Peace and Reconciliation.

Tutu, the first black archbishop of Cape Town, was awarded the Nobel Peace Prize in 1984 for his efforts to end apartheid.

Following the meeting, the couple’s official Instagram account shared several photos from the engagement with a message from Meghan and Harry saying, “Thank you Archbishop Tutu for your incredibly warm hospitality, Archie loved meeting you!

The account also shared some video highlights from momentous encounter including a heartwarming moment of Tutu asking Archie for a high five and another of him busting out a few dance moves in an attempt to grab the youngster’s attention from across the coffee table.

Later, Meghan attended her first engagements in Cape Town without Harry, who has traveled on to Botswana. One of the events was a visit to mothers2mothers (m2m), a charity training women with HIV to work as frontline health workers.

Related: Prince Harry says he is only having two children ‘maximum’ for the sake of the planet

Twenty-nine-year-old Limpho Nteko, one of the women m2m has helped train as one of their “mentor mothers,” welcomed the Duchess to the engagement.

“It was such an honor to meet the Duchess of Sussex in person and share with her the incredible and important work that we do as mothers2mothers,” she said in a m2m statement. “It was an opportunity to shine a light on the impact we have had and the lives we have changed but also to highlight the hard work that still lies ahead to ensure that we create a generation that is healthy and free from HIV.”

Meghan took an opportunity at the event to give away some of Archie clothes which she had brought from the UK.

“I just thought that, in the spirit of community, what’s so nice is to be able to share some of the things that we have at home as well,” the Duchess explained. “We can obviously make sure anything you need is provided for you, but we’ve brought some of the things that my friends and I used for our kids and Archie, that don’t fit anymore.”

The Duke and Duchess of Sussex have opened up to wellwishers at other engagements earlier this week about parenting Archie.

On Tuesday afternoon, Meghan and Harry marked Heritage Day, a public holiday which celebrates South Africa’s diversity of cultural traditions and beliefs, with a tour of the Bo-Kaap neighborhood in Cape Town.

While there, they visited the home of Shaamila Samoodien for tea.

Edross-Fakier added that the new mother also told her that “he travels well (and) slept most of the time on her chest.

“And then daddy said, ‘He’s come alive, he’s shouting and screaming and carrying on,'” Edross-Fakier said.

A royal source told CNN ahead of the tour that the Sussexes were hoping to include their son “at some point” but had been unable to say exactly when, as his age made a public appearance difficult to schedule.

Archie is thought to be youngest royal to go on an official tour, taking the title from his cousin Prince George who traveled with his parents to Australia in 2014 when he was just eight months old.