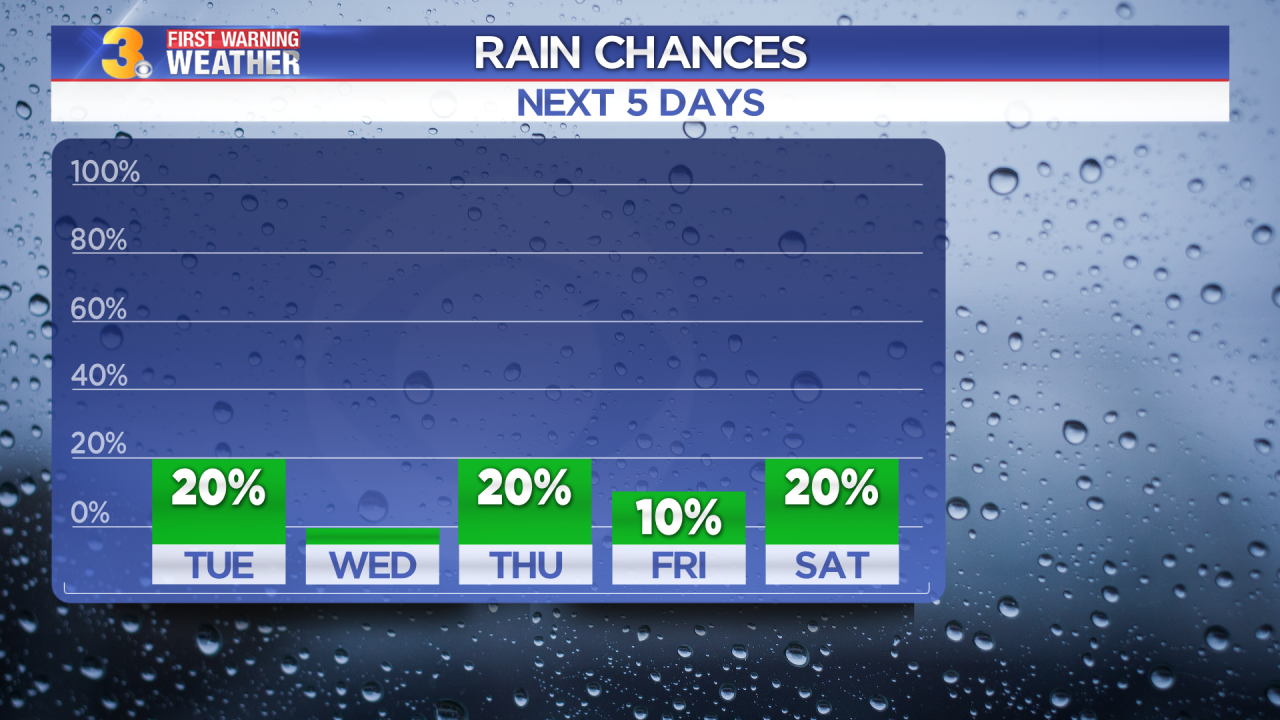 By: April Loveland
Posted at 6:34 PM, Sep 23, 2019
Today is the first day of fall, but the temperatures felt anything but fall-like. Summer will still hold on strong.

A cold front will move in tonight and Tuesday. Keeping a slight chance for a shower tomorrow morning, but most of the moisture will be gone by the time it reaches us here along the coast. Keeping a 20 percent chance. We will mainly just have to deal with more clouds.

High pressure will build in behind the cold front on Tuesday. We’ll start the day with overcast skies and a chance for a shower. Clouds will then clear our with mainly dry conditions and highs in the low 80s. Another cold front will move through Thursday, but again rain chances will remain low. Quiet weather looks to continue to end the work week.

Tropical Depression Karen is moving toward the north-northwest near 13 mph. A turn toward the north is expected late tonight or early Tuesday, and a northward to north-northeastward motion should continue through Wednesday night. On the forecast track, the center of Karen will move across the eastern Caribbean Sea this evening, and pass near or over Puerto Rico and the Virgin Islands late tonight or Tuesday morning. Karen will move over the western Atlantic to the north of Puerto Rico Tuesday night and Wednesday. Maximum sustained winds are near 35 mph with higher gusts. Little change in strength is forecast during the next 48 hours.

Tropical Storm Lorenzo is moving toward the west near 16 mph. A westward to west-northwestward motion at a similar forward speed is anticipated for the next several days. On the forecast track, the center of the tropical storm will pass well to the south of the Cabo Verde Islands tonight. Maximum sustained winds have increased to near 45 mph with higher gusts. Additional strengthening is forecast, and Lorenzo is expected to become a hurricane by Wednesday.

Jerry is moving toward the north-northwest near 6 mph, and this general motion should continue tonight. A turn to the northeast is expected on Tuesday, followed by a turn to the east-northeast on Wednesday. On the forecast track, the center of Jerry is expected to pass near Bermuda by early Wednesday. Maximum sustained winds are near 65 mph with higher gusts. Gradual weakening is forecast during the next few days.

A broad and elongated area of low pressure is located near the northeast tip of the Yucatan peninsula. This system is currently producing disorganized showers and thunderstorms over the southeast Gulf of Mexico. Some gradual development of the disturbance is possible while it moves slowly westward across the southwestern Gulf of Mexico during the next several days before it reaches the northeast coast of Mexico late Friday or Saturday.