No. 21 Virginia football avoids upset by ODU, comes back in the fourth quarter 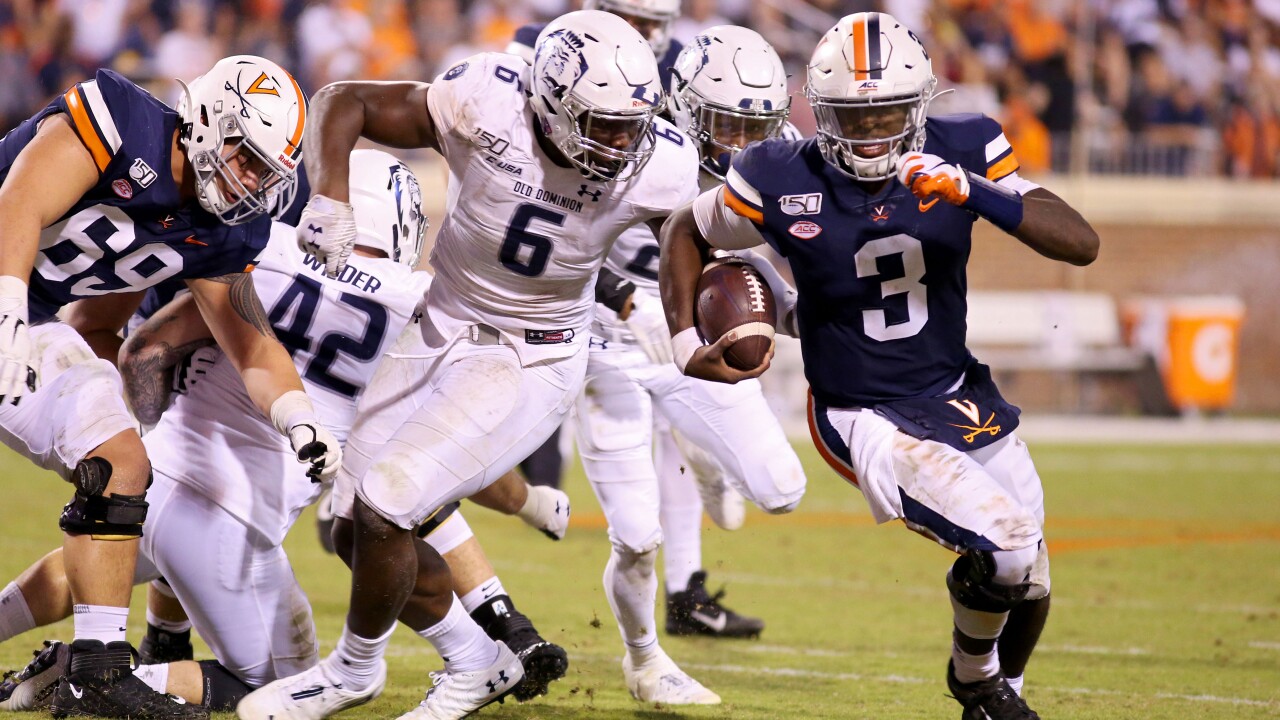 CHARLOTTESVILLE, VA – SEPTEMBER 21: Bryce Perkins #3 of the Virginia Cavaliers scrambles away from Keion White #6 of the Old Dominion Monarchs in the second half during a game at Scott Stadium on September 21, 2019 in Charlottesville, Virginia. (Photo by Ryan M. Kelly/Getty Images)

CHARLOTTESVILLE, Va. – Heading into Saturday’s matchup between No. 21 Virginia and Old Dominion, the Monarchs were 29-point underdogs.

It was the first time Virginia and Old Dominion had ever met on the football field, and despite being underdogs, the Monarchs went into the game ready to make an impressive first impression.

Old Dominion was first on the board in the first quarter with a field goal by Nick Rice. The Monarchs would follow it up with a rushing touchdown by quarterback Stone Smartt, another field goal then a passing touchdown to Matt Geiger that led to a 17-0 ODU lead in the second quarter.

With 6:57 left in the quarter, Virginia quarterback Bryce Perkins rushed 8 yards for a touchdown and the ‘Hoos entered the half with a 10-point deficit.

“As a competitor coach [Bobby] Wilder teaches us to strike first,” ODU defensive end Keion White said. “Always be the one that’s punching in the face first. I don’t care who it is. If you’re the number one team in America it doesn’t matter, we’re gonna come out fighting as a team.”

In the second half, it was Virginia that came out fighting.

It was UVA’s defense that would score first. Zane Zandier intercepted a pass from Smartt to come up with a pick-six.

Old Dominion had the ball in their own territory, and went for a fourth-down try that failed. It led to a rushing touchdown by Wayne Taulapapa that gave Virginia its first lead of the game.

“I felt like we needed that fourth-and-one in the fourth quarter,” ODU head coach Bobby Wilder said. “We needed a spark to get going, and I don’t regret it at all.

“That’s the type of football you need to play when you’re a huge underdog on the road. You’ve gotta go for it and that’s what we tried to do.”

A few minutes later, Perkins completed a pass to Jordan Reed for a 25-yard touchdown.

Virginia’s 28 unanswered points carried them to a 28-17 victory.

“The defense made their adjustments,” Smartt said about Virginia’s ability to keep ODU scoreless in the second half. “They started giving us different looks we had never seen before, even on the previous film, and just really them moving around their guys, different pressure, different coverages behind the pressure, that was kind of tough for us.”

“A lot of blitz,” Wilder added. “Their defensive coordinator’s outstanding. They dialed up some really good zone fires, and they put us in a lot of one-on-ones and we just couldn’t handle it.”

ODU’s White had a big game, finishing with a sack, six tackles, including 3 1/2 for losses, and a blocked field goal.

“I thought he was the best player on the field tonight for either team,” Wilder said. “He was dominant, they had to start double teaming him in the second half.”

Saturday’s game gives Virginia its first 4-0 start since 2004, while the Monarchs drop to 1-2.

“Right from the start of this game I felt like we were dominating the football game, and then to jump up 17-0, our guys thoroughly believed they could come in here and win,” Wilder said. “They felt like they should have won the game, so there’s a lot of disappointment.”

“As a team we hate to lose,” White added. “No team wants to lose, so I feel like we just have to execute better as a team, tomorrow look at the film, see what we can improve on and look forward to next week.”

The Monarchs open conference play when they host East Carolina next week, while the Cavaliers travel to Note Dame.