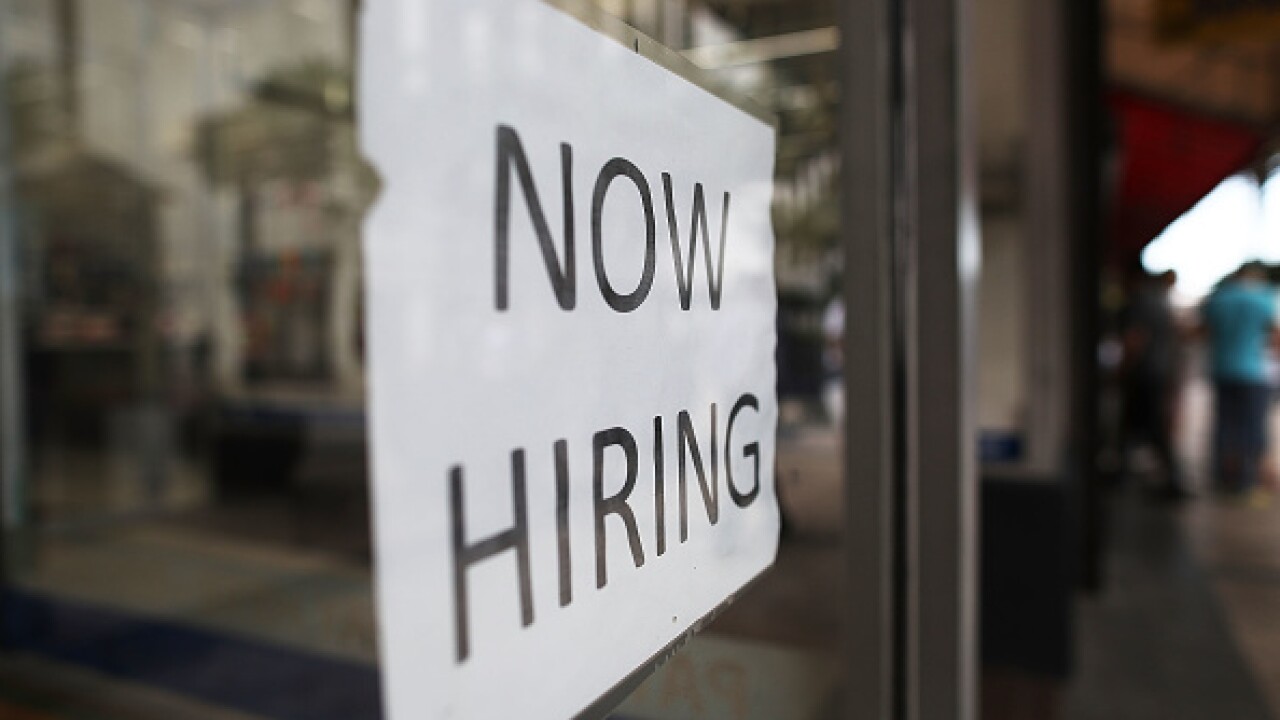 MIAMI, FL – MARCH 10: A Now Hiring sign is seen as the Bureau of Labor Statistics reports that nonfarm payrolls increased by 235,000 in February and the unemployment rate was 4.7 percent in the first full month of President Donald Trump’s term on March 10, 2017 in Miami, Florida. (Photo by Joe Raedle/Getty Images)

RICHMOND, Va. — Virginia continues to have one of the nation’s lowest unemployment rates, state and federal officials said Friday.

The Commonwealth’s seasonally adjusted unemployment rate dropped from 2.9 percent in July to 2.8 percent in August.

Virginia was tied with Utah and Colorado for the sixth-lowest unemployment rate last month. In July, Virginia and Colorado were tied for the seventh-lowest rate.

Virginia’s jobless rate continues to be much lower than the national average of 3.7 percent. Virginia has the third-lowest rate among states east of the Mississippi River, behind Vermont (2.1%) and New Hampshire (2.5%).

“The drop in Virginia’s unemployment rate is yet another sign that our economy remains strong and our efforts to create opportunity in every corner of the commonwealth are paying real dividends,” Gov. Ralph Northam said.

Timothy Aylor, an economist with the Virginia Employment Commission, also sees the falling rate as a strength for the state.

“Overall, as more people are able to find jobs and as people become more encouraged about the job market and re-enter it, I think that’s a good thing,” Aylor said. “It helps the state, and it helps the economy.”

Among the 18 states with the lowest unemployment rates in the country, Virginia has the largest labor force. Most of the 18 states have less than half of the labor force Virginia does. Aylor said this was a testament to the state’s economy.

“We have a highly skilled labor force. This is especially the case in some of the metro areas — Northern Virginia primarily,” Aylor said. “And this creates competition among employers as more employers take note of the quality of the workforce in the state.”

Related: Unemployment rate near all-time low, what does this mean for you?

In Northern Virginia, unemployment is especially low — below the state average.

“But that is not the case in an area like Alexandria or Arlington County in particular, where labor force participation rates are high and people are looking and finding work, and there is a lot of competition for it.”

Despite Virginia’s overall low rate, state officials affirmed their commitment to helping communities where unemployment is higher than average.

“We’re proud of this statewide unemployment rate,” said Brian Ball, Virginia’s secretary of commerce and trade. “But as some localities continue to struggle with a higher rate, the governor remains focused on bringing new investment and jobs to all regions of the Commonwealth.”