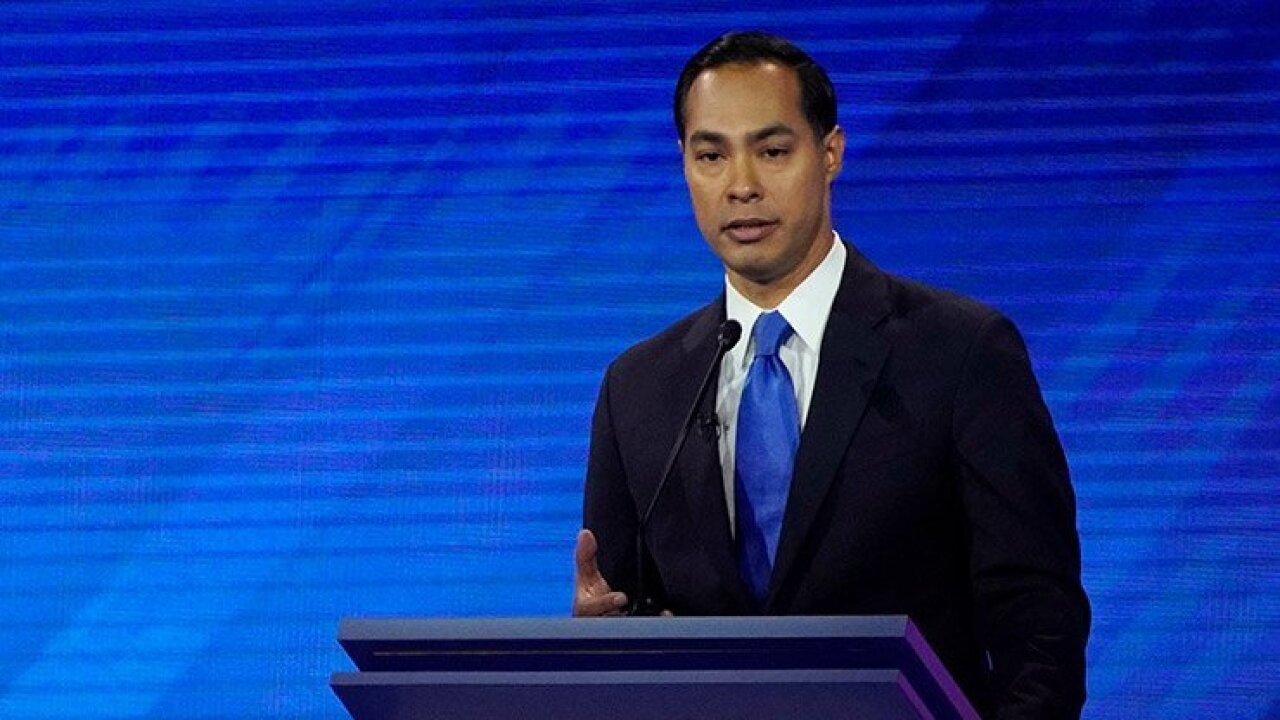 In a dramatic and dangerous maneuver for a candidate at the very back of the pack, former Housing and Urban Development Secretary Julian Castro sought to make his name at the Democratic debate on Thursday by sharply accusing former Vice President Joe Biden of forgetting what he’d said minutes before. 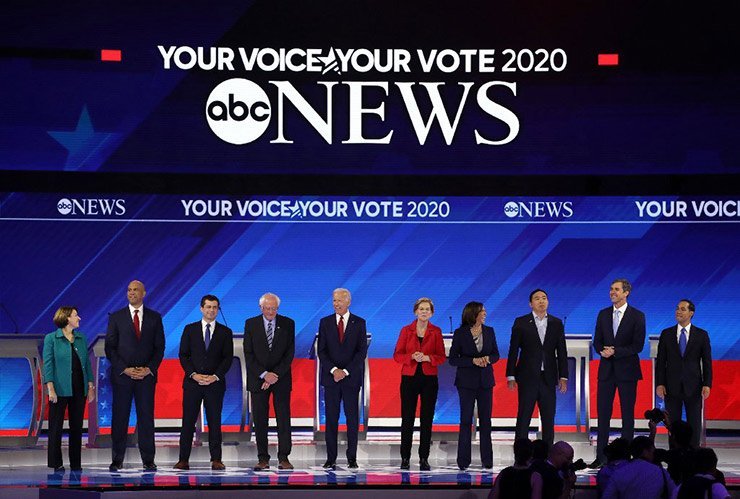 In a dramatic and dangerous maneuver for a candidate at the very back of the pack, former Housing and Urban Development Secretary Julian Castro sought to make his name at the Democratic debate on Thursday by sharply accusing former Vice President Joe Biden of forgetting what he’d said minutes before.

It came during a disagreement over a minor point in the candidates’ broader debate about whether to embrace “Medicare for All,” which Biden has opposed.

Castro argued Biden’s plan requires people to opt in to receive health insurance coverage and would not automatically enroll people in government-provided health insurance. Biden spoke up, calling that not true, and Castro jumped at the opening to pick at a flaw that has dogged Biden on the campaign trail: his memory.

Castro later offered a final shot at Biden, saying, “I’m fulfilling the legacy of Barack Obama and you are not.”

It was a stunning moment in a race where the younger contenders have often argued that it is time for a new generation of leadership and many Democratic voters have noted in interviews that Biden does not seem as sharp as he did during his eight years as Barack Obama’s vice president.

But it was an attack so cringe-worthy that many of the other candidates on the stage felt the need to step in — not only to provide levity, but also essentially to tell Castro to stand down.

“This is why presidential debates are becoming unwatchable,” South Bend, Indiana, Mayor Pete Buttigieg said. “This reminds everybody of what they cannot stand about Washington — scoring points against each other, poking at each other.”

The debate was expected to be a showdown among the three-top-polling candidates: Biden, Sen. Elizabeth Warren of Massachusetts and Sen. Bernie Sanders of Vermont. But those three at times receded on the stage — as lower-polling candidates like Buttigieg, former Rep. Beto O’Rourke of Texas and Sen. Cory Booker of New Jersey landed more memorable moments.

Booker, who has turned in compelling moments during several of the debates, skillfully pivoted from a question about whether he’d recommend his vegan lifestyle to meat-eaters to an argument that veterans issues were being overlooked in the debate.

After a discussion about bringing home troops from Afghanistan, Booker noted the urgent need to improve the care veterans receive when they come home — from failures in the health care system to the high number of veterans who end up homeless.

Though the debate generally focused on domestic policy, Sanders sought to land a blow on Biden — faulting him for voting to give former President George W. Bush the authority to go to war in Iraq.

“One of the big differences between you and me,” Sanders said, turning to Biden, “I never believed what (former Vice President Dick) Cheney and Bush said. I voted against the war in Iraq and helped lead the opposition.”

The debate in Houston took place after several weeks in which mass shootings have shocked Texas. Last month, a 21-year-old suspect allegedly killed 22 people in a Walmart in El Paso. Several weeks later, a gunman in Odessa went on a seemingly random rampage, hijacking a mail truck and killing five people while injuring at least 21 others.

That topic led to an impassioned speech by O’Rourke, who suspended his campaign after the shooting in his hometown of El Paso. O’Rourke was asked about his proposal for a gun buyback program that would take certain assault-stye weapons off the street, and whether he was willing to take guns away from Americans.

“I am if it’s a weapon that was designed to kill people on a battlefield,” O’Rourke said, defining the arms he would take away as high-velocity, high-impact weapons that “shred everything inside” on impact “so you bleed to death on a battlefield.”

“I met the mother of a 15-year-old girl who was shot,” O’Rourke said, in an emotional moment. “That mother watched her bleed to death over the course of an hour, because so many other people were shot by that AR-15 in Odessa. There weren’t enough ambulances.”

“Hell yes, we are going to take your AR-15,” O’Rourke said. “We’re not going to allow it to be used against Americans anymore.”

Earlier, O’Rourke laid blame on President Donald Trump for the shootings, arguing that the El Paso suspect was “inspired to kill by our President.”

“People asked me in El Paso … ‘Do you think Trump is responsible for what happened?’ And I said, ‘Well, look, obviously he didn’t pull the trigger, but he’s certainly been tweeting out the ammunition,’ ” she said.

Biden spars with Warren and Sanders in opening stages

The first hour of the debate laid bare the broad ideological divide in the Democratic Party as the initial stages once again focused on the future of health care in America.

Biden, whose camp had made clear before the debate that he planned to go after Warren, quickly made good on that promise by attempting to distance her from Obama, who remains one of the most popular figures in the Democratic Party.

“I know that the senator says she’s for Bernie, I’m for Barack,” Biden said. “I think the Obamacare worked. I think the way we add to it, replace everything that’s been cut, add a public option, guarantee that everyone will be able to have affordable insurance number one.”

He added, “My plan for health care costs a lot of money. It costs $740 billion. It doesn’t cost $30 trillion. $3.4 trillion a year, it turns out, is twice the entire federal budget is. That’s before — it exists now, without interest on the debt. How are we going to pay for it? I want to hear tonight how that happened.”

“My distinguished friend, the senator on my left, has not indicated how she pays for it,” Biden said, gesturing to Warren,

Sidestepping the opportunity to attack Biden, Warren chose to be gracious — complimenting the work of the Obama administration on health care. She would not — at the moderator’s prompting — say that middle class Americans’ taxes would go up, but she defended her plan.

“I actually never met anybody who likes their health insurance company. I’ve met people who like their doctors,” she said, along with their nurses, their pharmacists and their physical therapists. She added that Americans don’t want to spend all their time fighting with insurance companies.

Sanders, who has been praised by Biden as being honest with the American people that their taxes would go up if the country moves to “Medicare for All,” weighed in by citing the costs the country would bear if the nation does not move to Medicare for All.

“Americans don’t want to pay twice as much as other countries, and they guarantee health care for all people,” Sanders said.

It was Biden’s first attempt to go on the offensive in a debate that he’s trying to use to prove that he has the fire to compete with Trump.

Warren, like Sanders, still has a great deal of work to do in proving that her extensive portfolio of plans will appeal to broader universe of voters than the Democratic primary electorate. Biden has consistently been in the strongest position in head-to-head matchups with Trump throughout the primary campaign.