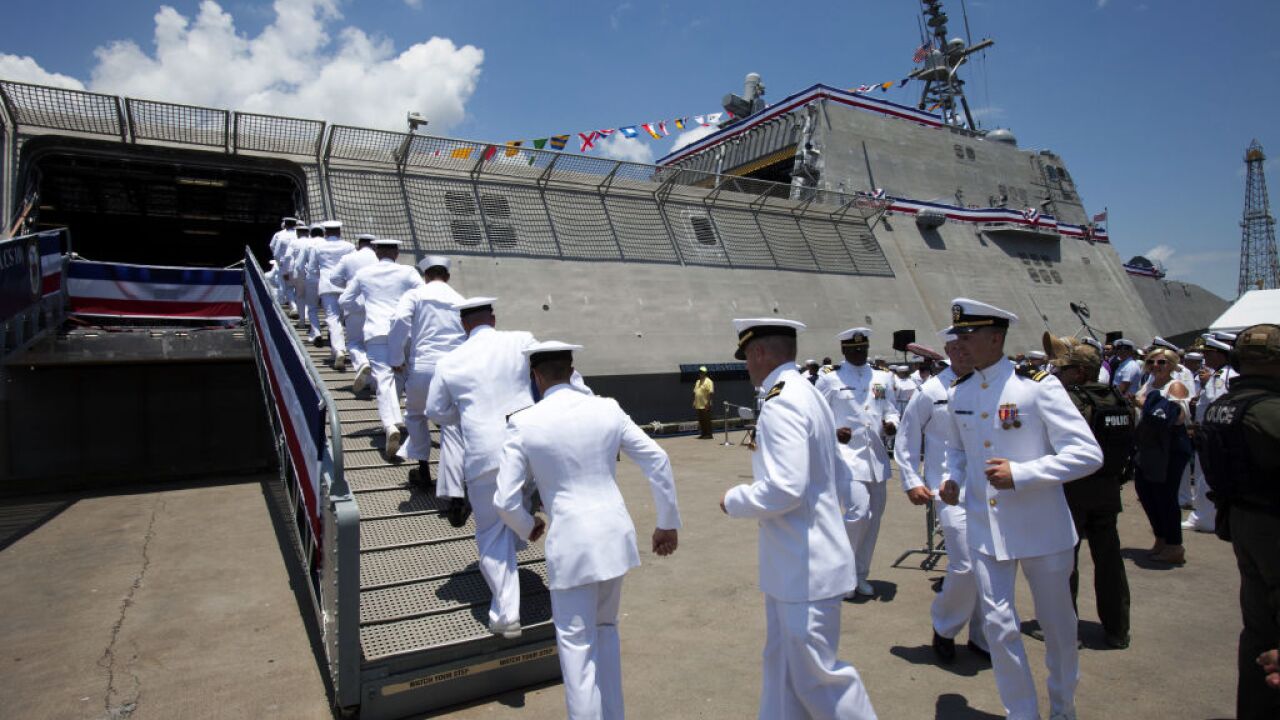 GALVESTON, TX – JUNE 10: The crew of the newly commissioned USS Gabrielle Giffords boards the ship on June 10, 2017 in Galveston, Texas. The U.S. Navy commissioned the warship named for former Rep. Gabrielle Giffords (D-AZ), a gun violence survivor, making it the third Navy ship ever to be named after a living woman. (Photo by Daniel Kramer/Getty Images)

Somewhere in the Pacific, a stealthy United States Navy warship is carrying new weapons that analysts say could help to tilt the balance of power in contested areas like the South China Sea.

The Naval Strike Missile is a sea-skimming cruise missile that is difficult to spot on radar, and can maneuver to avoid enemy defenses, according to Raytheon, the main US contractor for the weapon. It is paired on the Gabrielle Giffords with a MQ-8B Fire Scout helicopter drone, which is used to scout for targets.

The weapons will increase the lethality of the US Navy, according to Cmdr. John Fage, a spokesman for the US Navy’s 3rd Fleet who confirmed their deployment.

“The Pentagon is building a military force that can operate on a more sustainable basis and has a better chance of fighting and surviving within the PLA’s deadly anti-access, area denial envelope,” said Rand Corp. senior defense analyst Timothy Heath, referring to the mix of ships, aircraft and missiles amassed by China’s People’s Liberation Army to control parts of the Pacific.

Both the US and China blame each other for the rapid militarization of the South China Sea, one of the most contested areas in the world. Multiple countries claim parts of the commerce-heavy region, but Beijing’s claim is by far the most expansive, covering the majority of the sea.

Since 2015, the Chinese government have attempted to back up their position through the militarization of reclaimed shoals and sandbars across the South China Sea, and said that repeated US Navy exercises in the region show it is necessary for China to be able to defend its interests.

“In the face of heavily armed ships and military aircraft, how can we not build defense facilities?” said Chinese defense minister Wei Fenghe at the Shangi-la Dialogue in June.

About the Naval Strike Missile

The Gabrielle Giffords is the first LCS to deploy with Naval Strike Missiles, but most of the ships in the growing LCS fleet, which will eventually number more than 30, are planned to be armed with them, Navy officials told a Senate Armed Services subcommittee earlier this year.

Littoral combat ships come in two variants, the tri-hulled Independence class of which the Giffords is a part, and the single-hull Freedom class. Both variants, with drafts of 15 feet or less, are designed for operations in littoral areas or the shallower waters around coastlines and islands.

The Naval Strike Missile has had a relatively short time from testing to deployment by the US military. Developed by Norway’s Kongsberg Defense and Aerospace for the Norwegian military, it was successfully tested off the littoral combat ship USS Coronado in 2014. Defense giant Raytheon became the US contractor for the missiles in 2018.

Key to the Naval Strike Missile is its range of more than 100 miles, more than 30% farther than the Harpoon missiles the US Navy has been using in this anti-ship capacity.

The ability to work with the helicopter drone enables the ship to target outside what its own surface radars can see.

The Fire Scout drone gives the warship “eyes over the horizon,” said analyst Carl Schuster, a former US Navy captain. “The targeting capability is as important as the missile system. You can only hit what you can find.”

And having it on the smaller littoral combat ships takes a burden off bigger destroyers and cruisers, which are designed more for open water combat and which have been stretched thin by current demands, said Heath.

“I expect more LCS type ships to operate in the South China Sea, freeing up the large combatants that currently undertake most of the patrols in that region,” Heath said.

While the US Navy has not officially said where the Gabrielle Giffords is heading, there is speculation it will be Singapore, where Giffords’ sister ship, the USS Montgomery, deployed this summer, albeit without Naval Strike Missiles.

“USS Gabrielle Giffords’ mission will be to conduct maritime security operations, perform theater security cooperation, provide crisis response capability, and maintain a forward naval presence, wherever and whenever called upon. However, we don’t discuss specifics as a matter of operational security,” Fage said.

US Navy leaders have said multiple times this year they plan to have two of the littoral combat ships operating out of Singapore in this calendar year. And more could come as the fleet is built out.

The weapons’ deployment sends an important message and can eventually “change the game” in Western Pacific waters, where China now enjoys a 3-to-1 advantage in cruise missiles over the US, said Schuster.

“This is a first step towards redressing that imbalance with more to follow in the years ahead,” Schuster said.

The weapons could send messages not only to China, but to US partners in the Asia-Pacific region, including those in the Association of Southeast Asian Nations like Singapore or Vietnam, which is seeing increasing friction with Beijing over island claims and mineral rights in areas of the South China Sea.

“The net effect should bolster the credibility of US deterrent power in the region,” said Heath. “It also makes partnership with the US less of a risk, as these investments demonstrate the US commitment to the region.”

Washington has been promoting itself as a more reliable partner than China in the region, especially in the South China Sea, where it conducts frequent operations as a part of what it calls its commitment to a free and open Indo-Pacific region.

China, which claims that almost all of the South China Sea is its territory, says the US military presence in it threatens peace and stability.

The addition of any new US firepower will almost certainly rankle Beijing as much for the message it sends as the might it displays.

“ASEAN countries should benefit in particular from the stronger US military presence in Southeast Asia, as China is likely to respond in part by operating more cautiously in the South China Sea,” Heath said.