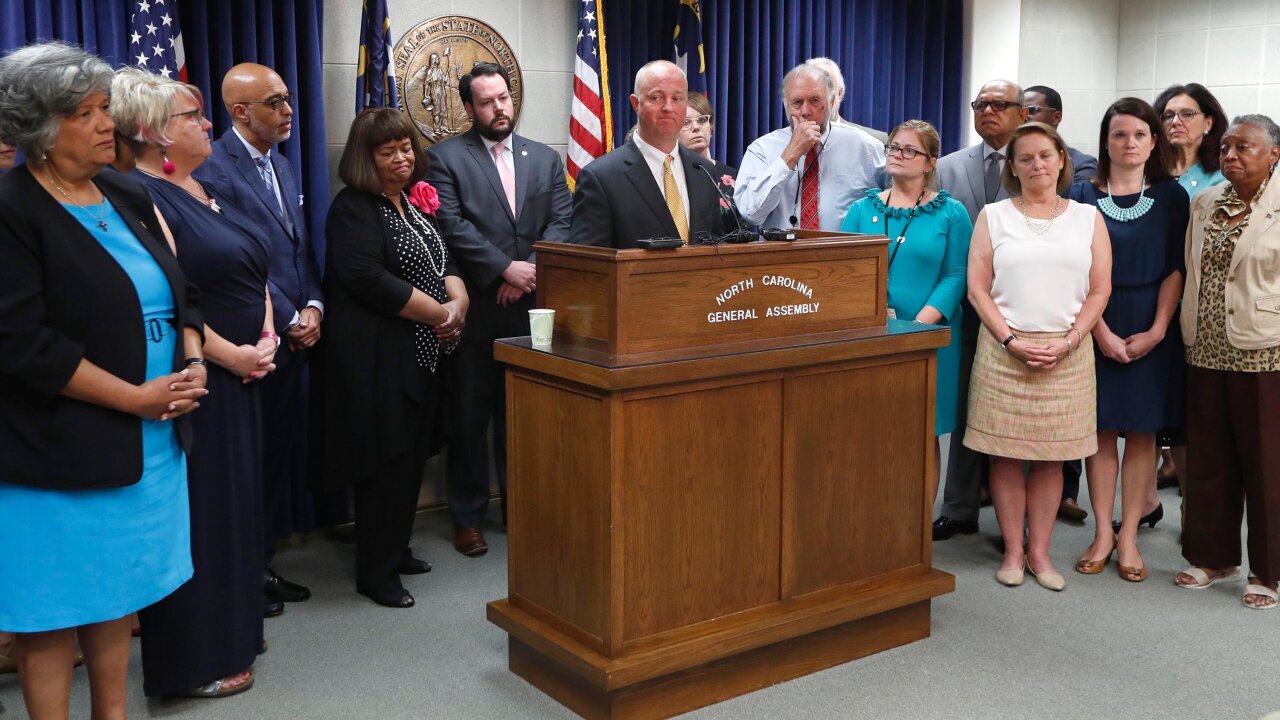 Democrats in North Carolina on Wednesday accused Republicans of deceptive behavior after the state House held a vote to override Democratic Gov. Roy Cooper’s veto of a budget bill.

North Carolina House Democrats claimed that they were told by the chamber’s Republican leadership that there would be no votes in the House’s morning session on Wednesday.

GOP leadership refuted Democrats’ claims, saying they never informed their colleagues there would be no recorded votes.

When the vote to overturn Cooper’s veto was brought up Wednesday morning, Democratic state Reps. Deb Butler and Mary Belk — some of the few Democrats on the House floor — voiced objection.

Butler accused Republicans of “trickery” and hijacking the democratic process.

“This is a travesty of the process and you know it,” Rep. Deb Butler said as the voting got underway.

She shouted several times, “We will not yield.”

“Our leadership is not present. This is improper,” Butler said, adding later, “There’s no one here, because we have been deceived.”

In a “tense” moment during the chaos, House Speaker Tim Moore, a Republican, called the sergeant-at-arms to attempt to remove her from the House floor, Butler recalled in an interview Wednesday night. But Butler’s Democratic colleagues surrounded her, preventing her from being removed or arrested, she said.

Cooper’s veto was overturned by the House in a 55-9 vote, with almost half of the state House not being present to vote. Belk told CNN that about 15 members of the 55 House Democrats were present for the vote, but not all were given the opportunity to vote.

The Senate, where Republicans also hold a majority, has not yet voted on the veto.

Moore later said at a news conference that if Democrats didn’t want the bill to pass, “all they had to do was show up for work.”

Cooper vetoed the budget bill in June, calling it a “bad budget with the wrong priorities.”

“We should be investing in public schools, teacher pay and health care instead of more tax breaks for corporations,” the Democratic governor said in a letter announcing his decision.

Cooper, who was at an event commemorating the anniversary of the 9/11 attacks on Wednesday morning, accused House Republicans of lying.

“Today, on the 18th anniversary of 9/11, while the state was honoring first responders, Republicans called a deceptive, surprise override of my budget veto,” Cooper told reporters Wednesday.

House Democratic Leader Darren Jackson was told by state GOP Rep. David Lewis, the chairman of the House Rules, Calendar, and Operations Committee, that there would not be recorded votes at 8:30 a.m., but later in the day, according to Jackson’s office.

Lewis and Moore claimed they never gave notice there would not be votes held and said the budget bill was on the calendar, as well as the potential override.

“There was never any statement made that we would not take up votes this morning,” Moore said. “That allegation is simply not accurate.”

Lewis said he announced twice while residing over Tuesday’s session that there would be votes and asked if there were objections.

The two Republicans claimed that House Democrats were at the state Capitol during the morning votes and in a caucus meeting “drawing maps,” which they said was a violation of a court order.

Butler told CNN that Moore had taken her comments out of context. Butler said she was referring to their work on the redistricting committee, of which she is a member, not the House Democratic caucus as a whole.

“It is not true that House Democrats missed the vote because we had a caucus meeting and were drawing maps,” Todd Barlow, Jackson’s legislative counsel, told CNN via email.

Barlow said that House Democrats were in their legislative offices or away on business at the time of the vote. At least one Democratic lawmaker was at a 9/11 ceremony, Barlow said.

The caucus meeting was scheduled for later in the day, according to Barlow.

On Wednesday afternoon, Jackson made a motion to recall the veto vote on the budget bill, but the motion failed.

Butler told CNN she believes that Senate Democrats will be able to block a veto override in that chamber. Republicans, who hold 29 of the 50 seats in the state Senate, need only one vote to override Cooper’s veto.