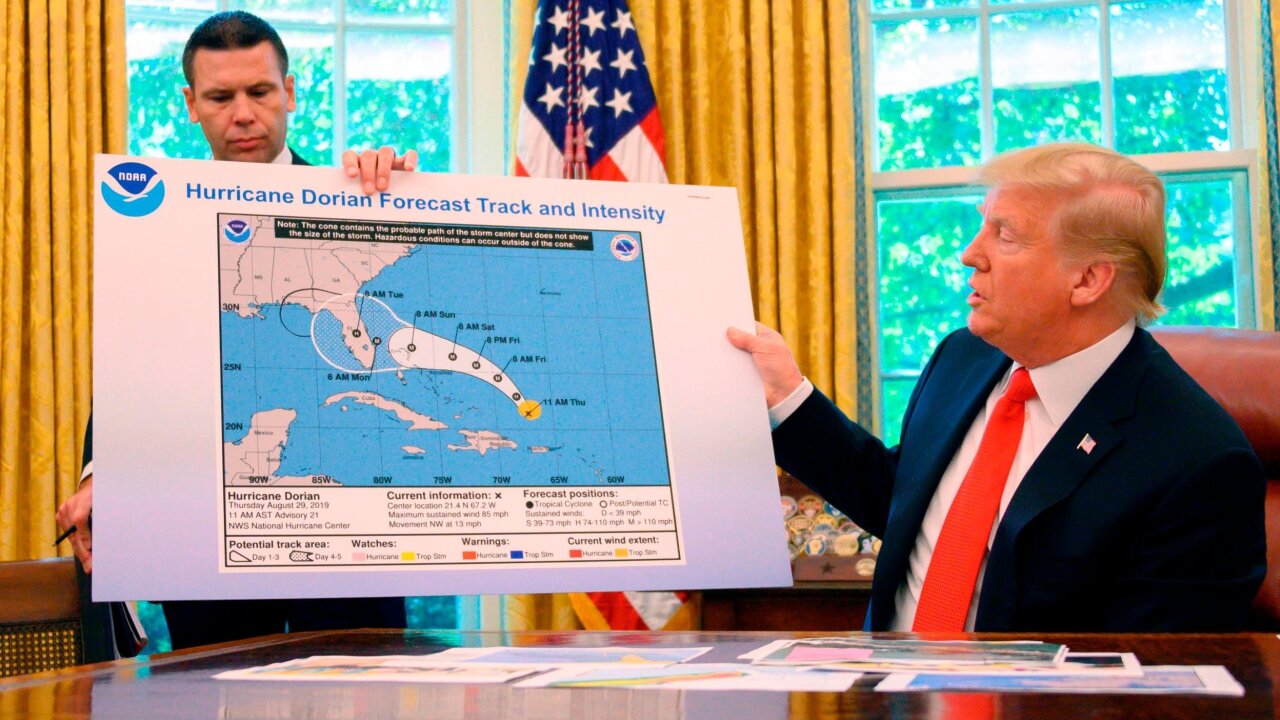 The National Oceanic and Atmospheric Administration’s acting administrator is standing by the agency’s support of President Donald Trump’s claims that Hurricane Dorian was likely to hit Alabama.

The National Oceanic and Atmospheric Administration on Tuesday released an internal email sent by the agency’s acting chief scientist announcing that he will investigate why the agency backed President Donald Trump’s false claim that Hurricane Dorian was likely to hit Alabama.

The memo’s public release — it had been originally sent to NOAA staff on Sunday, according to a copy obtained by CNN — marks the latest development in the controversy surrounding Trump’s false assertion about Dorian’s path. On Friday, NOAA had disavowed a tweet from the National Weather Service’s Birmingham, Alabama, office contradicting Trump’s claim.

The National Oceanic and Atmospheric Administration’s acting administrator is standing by the agency’s support of President Donald Trump’s claims that Hurricane Dorian was likely to hit Alabama.

“I am pursuing the potential violations of our NOAA Administrative Order on Scientific Integrity,” acting Chief Scientist Craig McLean wrote in the memo. “My understanding is that this intervention to contradict the forecaster was not based on science but on external factors including reputation and appearance, or simply put, political.”

He added that the episode has been “very concerning” because “it compromises the ability of NOAA to convey life-saving information necessary to avoid substantial and specific danger to public health and safety.”

“If the public cannot trust our information, or we debase our forecaster’s warnings and products, that specific danger arises,” McLean wrote.

Trump falsely claimed on September 1 that Alabama “would most likely be hit (much) harder than anticipated” by Hurricane Dorian — an assertion he later escalated in displaying an apparently altered map of a NOAA forecast that extended Dorian’s path into Alabama with a black marker.

“That was the original chart, and you see it was going to hit not only Florida but Georgia,” Trump claimed in the Oval Office while displaying the map. “It took a right turn. And, ultimately, hopefully we’re going to be lucky. It depends on what happens with South Carolina and North Carolina,” he added.

CNN Weather meteorologists say one forecast before Trump’s initial claim showed one-tenth of one county in extreme southeast Alabama was included in one model of the storm’s potential path.

“You know that the value of our science is in the complexity of our understanding, our ability to convey that understanding to a wide audience of users of this information, and to establish and sustain the public trust in the truth and legitimacy of that information,” McLean said in outlining the reason for his investigation.

“I have a responsibility to pursue these truths. I will.”