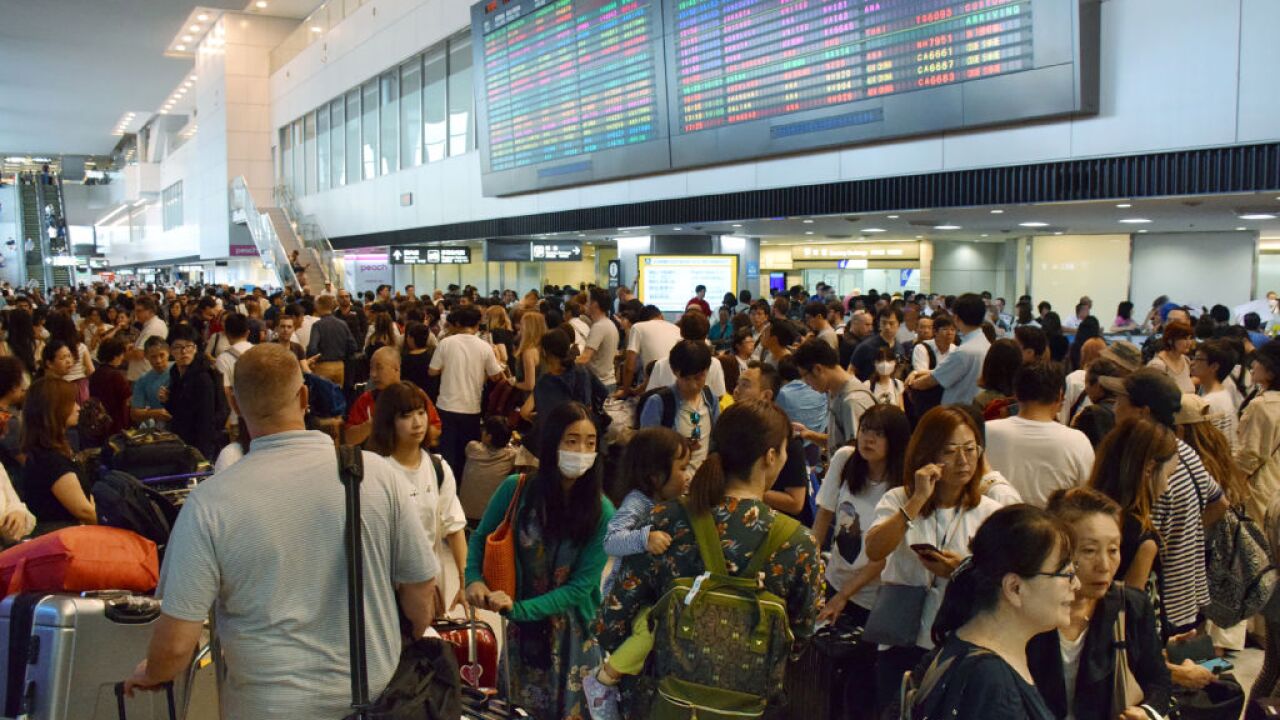 Passengers wait at the arrivals hall of Narita International Airport for transportation as trains running to and from the airport were halted due to passing Typhoon Faxai in Narita, Chiba Prefecture on September 9, 2019. – The powerful typhoon that battered Tokyo overnight with ferocious winds killed two people, police said on September 9, as halted trains caused commuter chaos and more than 100 flights were cancelled. (Photo by jiji press / JIJI PRESS / AFP) / Japan OUT (Photo credit should read JIJI PRESS/AFP/Getty Images)

A powerful typhoon in Japan has left one person dead, more than 100 flights canceled, and thousands of people stranded at the airport.

Typhoon Faxai, which made landfall early Monday morning in the coastal city of Chiba, brought heavy rain and winds of 120 miles per hour, according to the Japan Meteorological Agency (JMA).

The storm then moved over Tokyo and paralyzed transport. More than 100 flights to and from airports in the Tokyo area were canceled on Monday, including 49 Japan Airlines flights and 41 by All Nippon Airways, according to the airport website. The entire Keikyu rail line, which connects Tokyo and Yokohama to Haneda Airport, was suspended.

More than 13,300 passengers were stranded at Narita International Airport overnight, according to an airport spokesperson. With highways blocked and two railways to the city center shut down, arriving passengers had no way to leave the airport.

The airport handed out 18,000 sets of water, blankets and crackers for the passengers who had to spend the night. The railways and highways slowly cleared resumed operation on Tuesday morning, allowing travelers to start trickling out into the city.

Narita is one of two international airports in the Tokyo area.

It wasn’t just the area around the airport — major subway stations in Tokyo were crammed full of commuters on Monday, all stuck waiting for bullet trains and subway services that had shut down.

The train services gradually resumed mid-morning, but all lines were delayed.

Highways were shut down, departing ships were canceled at Tokyo Port, and rail lines closed on Sunday and Monday.

Photos show flooded streets, littered with downed trees and branches. Workers on Monday tended to signposts and lamps that had blown over, and employees at the Higashi Chiba train station inspected the roof, which was twisted and torn apart.

There has been at least one death related to the storm so far — Tokyo police said a woman was hospitalized and died on Monday.

Ahead of the typhoon, JMA issued storm surge, flood, and landslide warnings, and asked the public to avoid going outdoors.

An evacuation advisory was issued Sunday night for about 150,000 people in the Kanagawa, Shizuoka, and Tokyo prefectures, with evacuation preparation information delivered to about 2.5 million people, according to NHK. Evacuation shelters were set up across Tokyo, including the city wards of Minato, Machida, Meguro and more.

By Monday mid-morning, most of the evacuation orders across Tokyo had been canceled, and storm warnings in the Tokyo area lifted. However, the Tokyo Disaster Prevention Management warned residents to remain alert for strong winds.

The typhoon is now forecast to move northeast away from Japan and into the open Pacific over the next day, with maximum wind speeds expected to weaken to 26 mph by Tuesday, according to JMA.