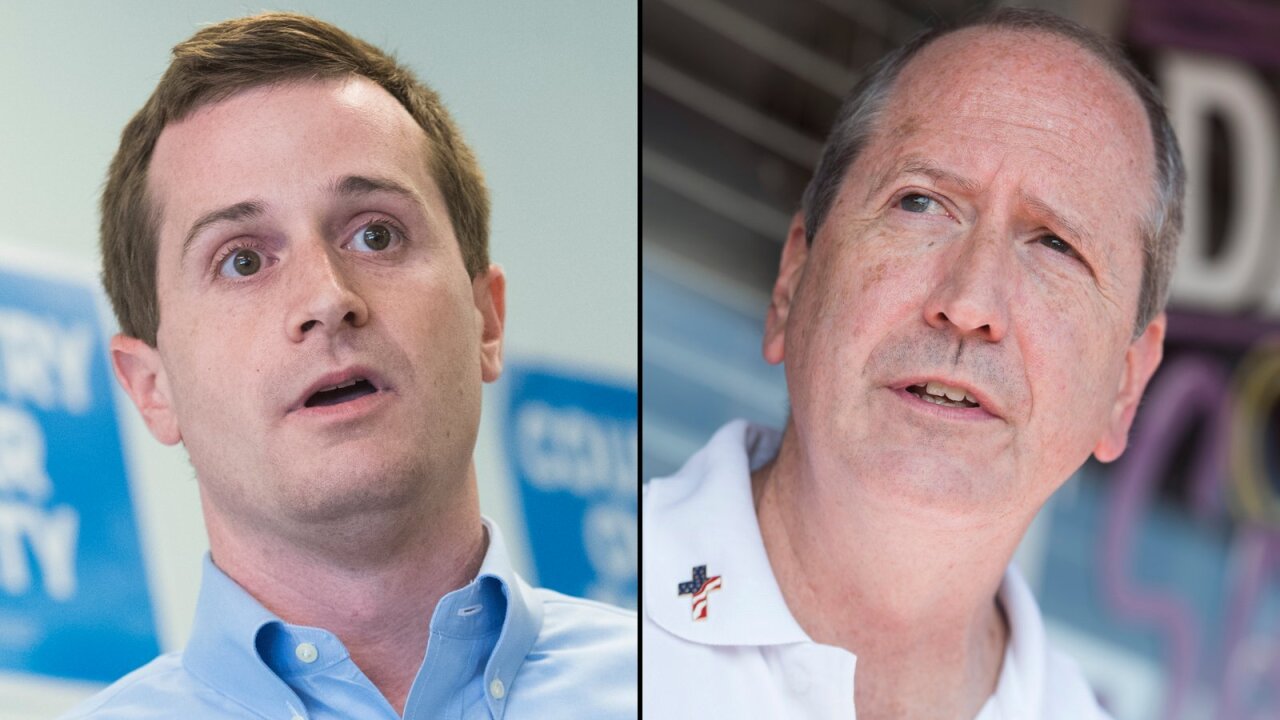 The closely watched contest in the state’s 9th Congressional District comes after credible allegations of ballot fraud in the 2018 midterm election caused the State Board of Elections to order a new election earlier this year. Now, nearly 10 months after Election Day, voters will choose between Democrat Dan McCready, a Marine Corps veteran, and conservative state Sen. Dan Bishop.

The closely watched contest in the state’s 9th Congressional District comes after credible allegations of ballot fraud in the 2018 midterm election caused the State Board of Elections to order a new election earlier this year. Now, nearly 10 months after Election Day, voters will choose between Democrat Dan McCready, a Marine Corps veteran, and conservative state Sen. Dan Bishop.

The race drew national attention as a potential 2020 bellwether, in a district that stretched from the Charlotte suburbs to the military town of Fayetteville. Trump and Vice President Mike Pence both made eleventh hour trips to the district on Monday in an effort to bolster Bishop.

The “do-over” special election came after the state board of elections refused to certify the 2018 House race results in the district after fraud allegations, ordering a new election.

Trump was not on the ballot, but Bishop’s narrow victory in a race widely viewed as a referendum on the White House will provide a small measure of comfort to Republicans in 2020.

Republicans normally would have been expected to dominate in a district that Trump won, but data released to the public ahead of the Tuesday vote showed a close race, underscoring GOP troubles in the suburbs during the Trump era. The President’s approval rating in a number of recent of polls is approaching lows not seen since 2017.

Trump’s message ahead of the special election, which echoed his speeches before the midterms last year, might have helped drag Bishop over the finish line in the 9th Congressional District, but a similar Republican-Democrat split there next year would likely spell doom for Trump.

The closely watched contest in the state’s 9th District came after credible allegations of ballot fraud in the 2018 midterm election caused the State Board of Elections to order a new election earlier this year. Now, nearly 10 months after Election Day, voters finally decided between McCready, a Marine Corps veteran, and Bishop, the second Republican nominee.

McCready appeared to suffer a narrow defeat to Republican Mark Harris last November, but evidence of ballot fraud by a GOP operative connected to Harris surfaced before the results could be certified. Harris decided not to run again in the special election.

Bishop was previously best known for his lead role in passing North Carolina’s “bathroom bill,” legislation widely denounced as discriminatory and subsequently scaled back with the approval of Democratic Gov. Roy Cooper, who had campaigned against it.

Voters in the state’s 3rd Congressional District also elected Republican state Rep. Greg Murphy over Democratic former Greenville Mayor Allen Thomas. The special election in that Republican-leaning district was called after GOP Rep. Walter Jones, who had represented it since 1995, died in February.

Trump, who has sent several tweets in support of Bishop and Murphy, held a rally in Fayetteville on Monday night in an attempt to push them over the finish line. Trump cast the special election, and the 2020 presidential election, as a fight for the status quo, describing Democrats as the “America-hating left.”

Tuesday’s results will do little to quell doubts over the political punch of Trump’s repeated attempts to paint progressive congresswomen like Reps. Alexandria Ocasio-Cortez of New York and Ilhan Omar of Minnesota as the face of the Democratic Party, in a bid to sway moderate voters to the right and energize his base.

McCready’s near-miss could also signal that, for all that base might enjoy them, Trump’s attacks on lawmakers like Omar are a turn-off to moderates. The President held a now infamous rally earlier this summer in North Carolina, where the crowd in Greenville chanted, “Send her back!” as he railed against Omar, who was born in Somalia.

They added extra early voting hours in several counties over the weekend. Additionally, election officials extended the date by which absentee ballots could be received by 3rd Congressional District counties, as long as the ballots were postmarked by Tuesday.