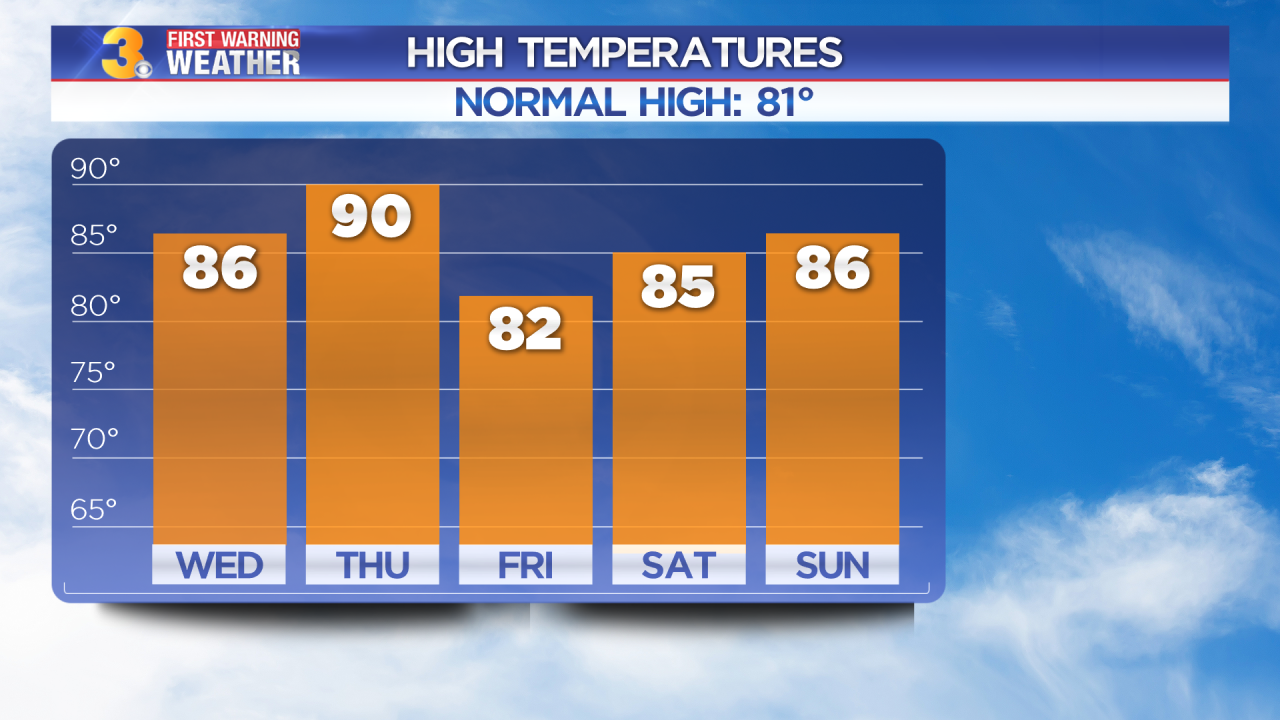 Mostly clear and calm overnight. Patchy dense fog is possible by Wednesday morning. Temperatures will dip into the 60s.

The First Day of Fall is now just two weeks away, but it’s going to feel more like summer on Wednesday. Temperatures will warm to the mid and upper 80s under mostly sunny skies. It will feel closer to 95 degrees due to the humidity.

Thursday will be our warmest day of the week. Skies will be partly cloudy with highs in the upper 80s to near 90. It will feel closer to the triple digits though! Keeping a 20 percent chance for a shower or storm.

A little bit better chance to see some wet weather to end the work week. Temperatures will be closer to normal for this time of year with highs in the low 80s.

The weekend isn’t looking too shabby. Expect partly cloudy skies Saturday with highs in the mid 80s. A slight chance for a shower or storm on Sunday. Highs will once again be in the mid 80s.

Better chances for showers and storms to start the work week.

A surface trough located over the Turks and Caicos is producing widespread cloudiness and disorganized thunderstorms over the Turks and Caicos and the southeastern Bahamas, and extending northward over the southwestern Atlantic for a few hundred miles. Ship reports indicate that tropical-storm-force wind gusts are occurring in some of the heavier squalls. Limited development of this disturbance is expected during the next few days while the system moves slowly west-northwestward across the Bahamas due to only marginally conducive upper-level winds. However, environmental conditions could become more favorable for development when the system moves over the Florida Straits and into the eastern Gulf of Mexico late this week and over the weekend. Regardless of development, this disturbance will produce periods of locally heavy rainfall and gusty winds across the Bahamas through Thursday, and across Florida on Friday and continuing into the weekend.

A broad low pressure system, associated with a tropical wave, is located about 900 miles east of the Lesser Antilles. Although this disturbance continues to produce disorganized shower activity, some slight development of this system is still possible tonight and Wednesday. By Thursday, however, upper-level winds are forecast to become unfavorable for tropical cyclone formation. This disturbance is expected to move slowly westward across the tropical Atlantic Ocean for the next several days.

A tropical wave located between the west coast of Africa and the Cabo Verde Islands is expected to move quickly westward during the next several days. Some slow development is possible over the weekend when the system is a few hundred miles east of the Windward Islands.