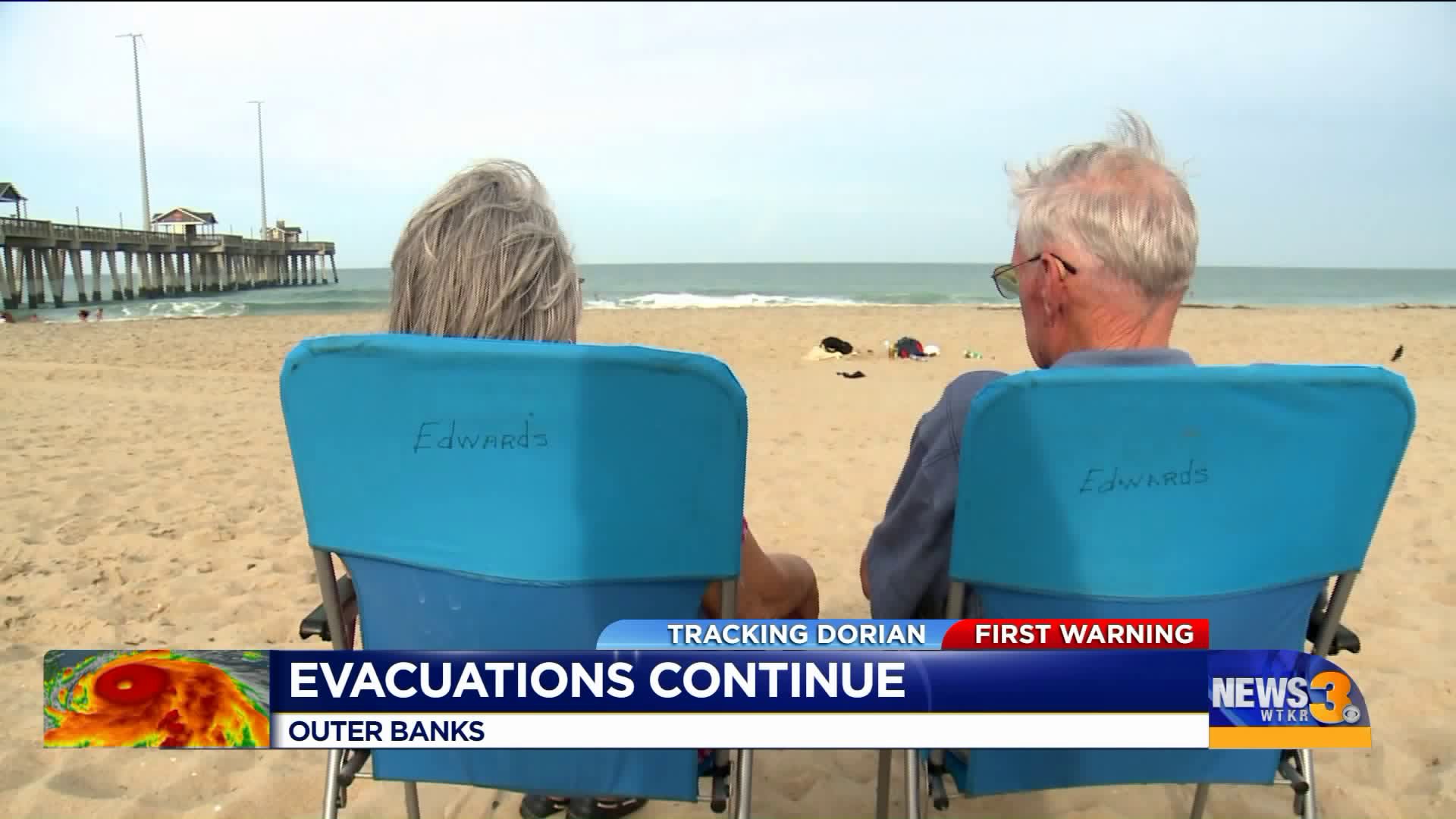 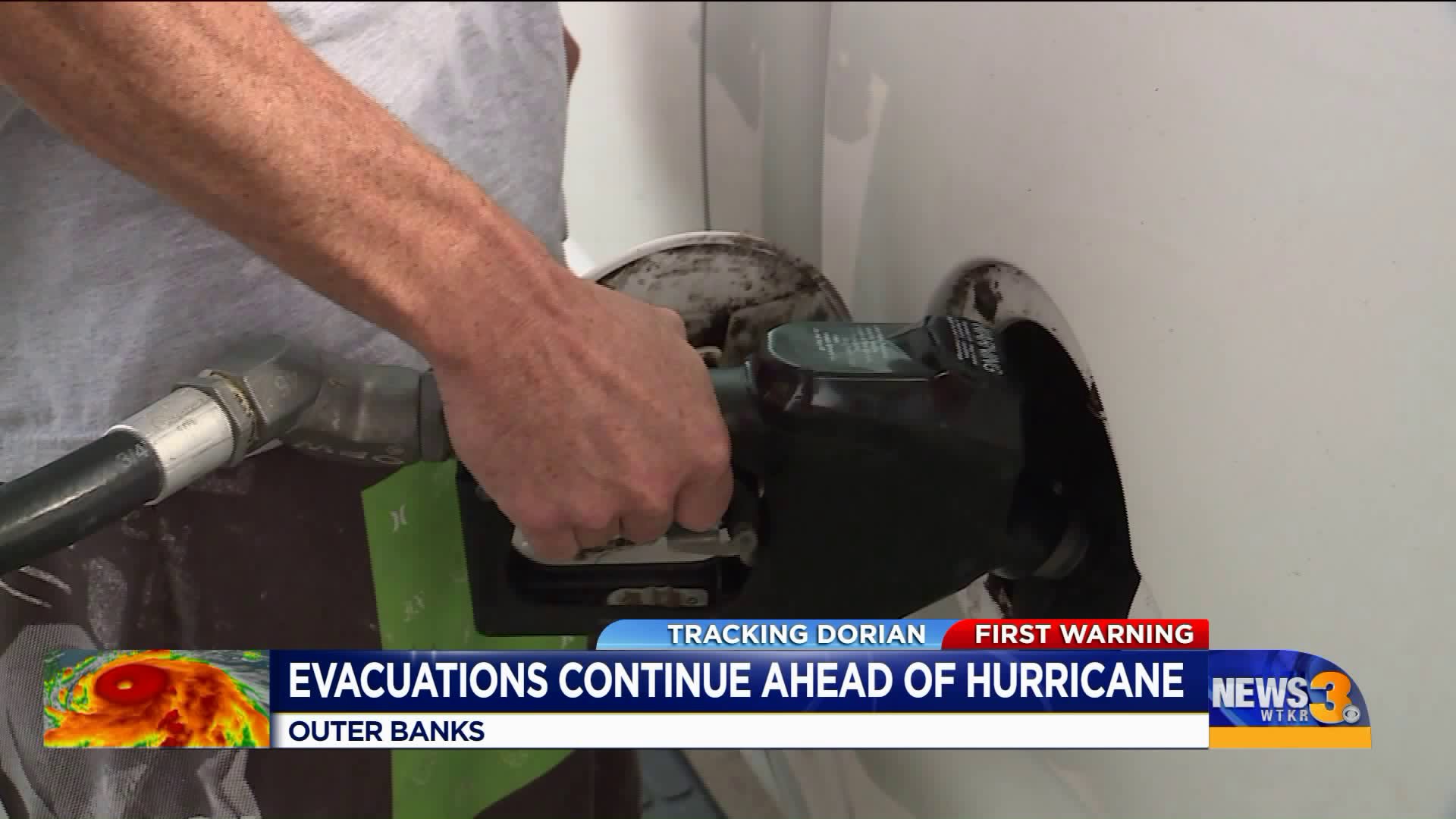 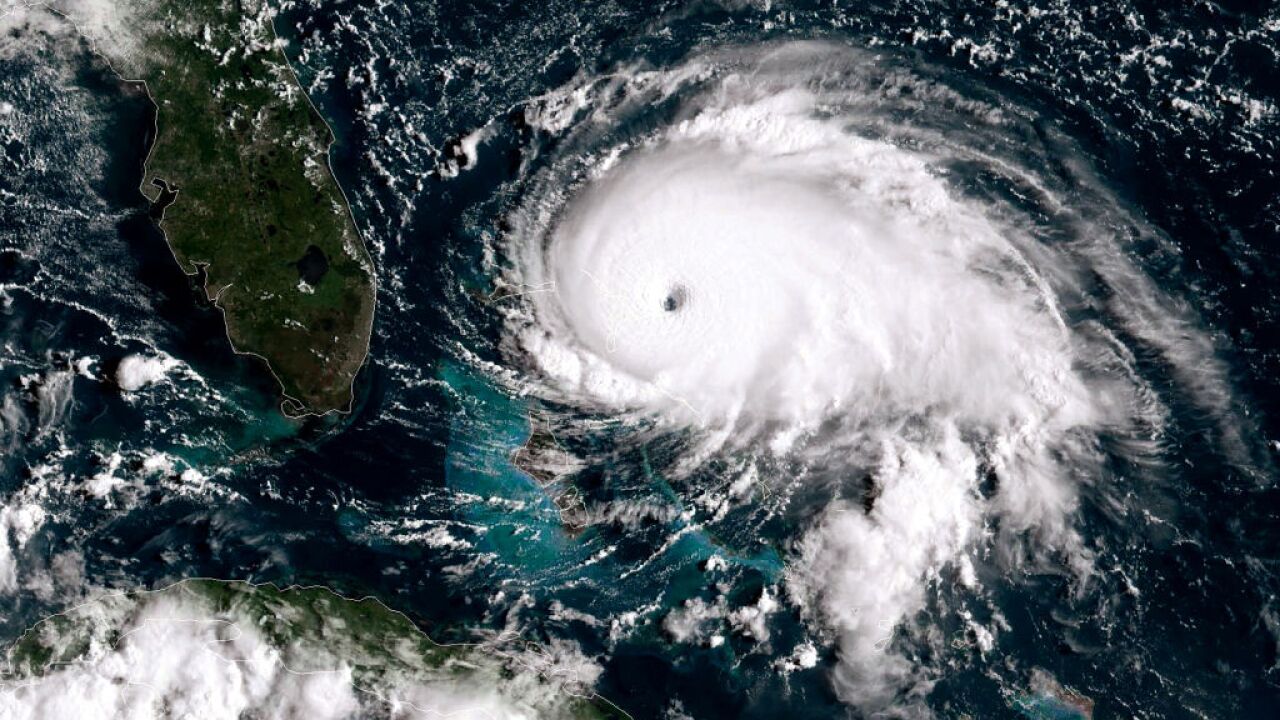 A mandatory evacuation was issued for all Dare County visitors and residents as Hurricane Dorian approached North Carolina.

ATLANTIC OCEAN – SEPTEMBER 1: In this NOAA GOES-East satellite handout image, Hurricane Dorian, now a Cat. 5 storm, tracks towards the Florida coast taken at 13:20Z September 1, 2019 in the Atlantic Ocean. A hurricane warning is in effect for much of the northwestern Bahamas as it gets hit with 175 mph winds. According to the National Hurricane Center Dorian is predicted to hit the U.S. as a Category 4 storm. (Photo by NOAA via Getty Images)

“We are very disappointed. All the kids have been looking forward to this for six months and now it’s gone,” said Maryland resident John Cox.

Vacations for thousands were cut abruptly short due to Dorian’s potential impacts. Highway 158 leading out of the Outer Banks was jam-packed Tuesday.

“It’s a bummer. It’s really the only time we can get together as a family,” said Maryland resident Scarlett Lehman.

The Lehman family tried to soak up the picture-perfect beach day Tuesday, especially John Lehman, who thinks this could be his last time at the beach.

“I have prostate cancer, so I soaked it in, listened to the waves, talked to my sister, watched my dog run around. This could be my last time in Duck,” he said.

While tourists hit the highways, many residents gassed up and boarded up their homes on Tuesday, ready to ride Dorian out.

“I’ve stayed every hurricane so far. I’ve got  property to look after, so I will wait last minute to see what happens,” said Kitty Hawk resident Doug Yoder.

The evacuation affected the following areas:

Tolls were suspended for northbound lanes of the Chesapeake Expressway, but have since resumed as of 6 a.m. Saturday.

Dare County Schools will be in regular session Tuesday but will close for all students and staff from Wednesday-Friday, September 6.

The Afterschool Enrichment Program (ASEP) will operate on a normal schedule Tuesday.

Dare County Public Works will also be suspending trash collection until further notice after regular service on Wednesday, the county announced on Twitter.

The Dare County Control Group has established a curfew for Hatteras Island (all areas south of Oregon Inlet) from 8 p.m. Friday through 8 a.m. Saturday. Officials say roadways on Hatteras Island are covered with sand and water, making travel extremely dangerous.

NCDOT crews are working to assess damage along NC 12. All of Hatteras Island is without power as of 4:20 p.m. Friday.

Cape Hatteras Electric Cooperative crews are out in the field working on restoration efforts.

Water service to Hatteras Village has been turned off due to a leak that cannot be found and repaired due to flooding. Crews are standing by, and once the water recedes, repairs will be made and a water pressure advisory will be issued with a recommendation to boil water.