Inside the country’s largest sanctuary for abused and neglected donkeys 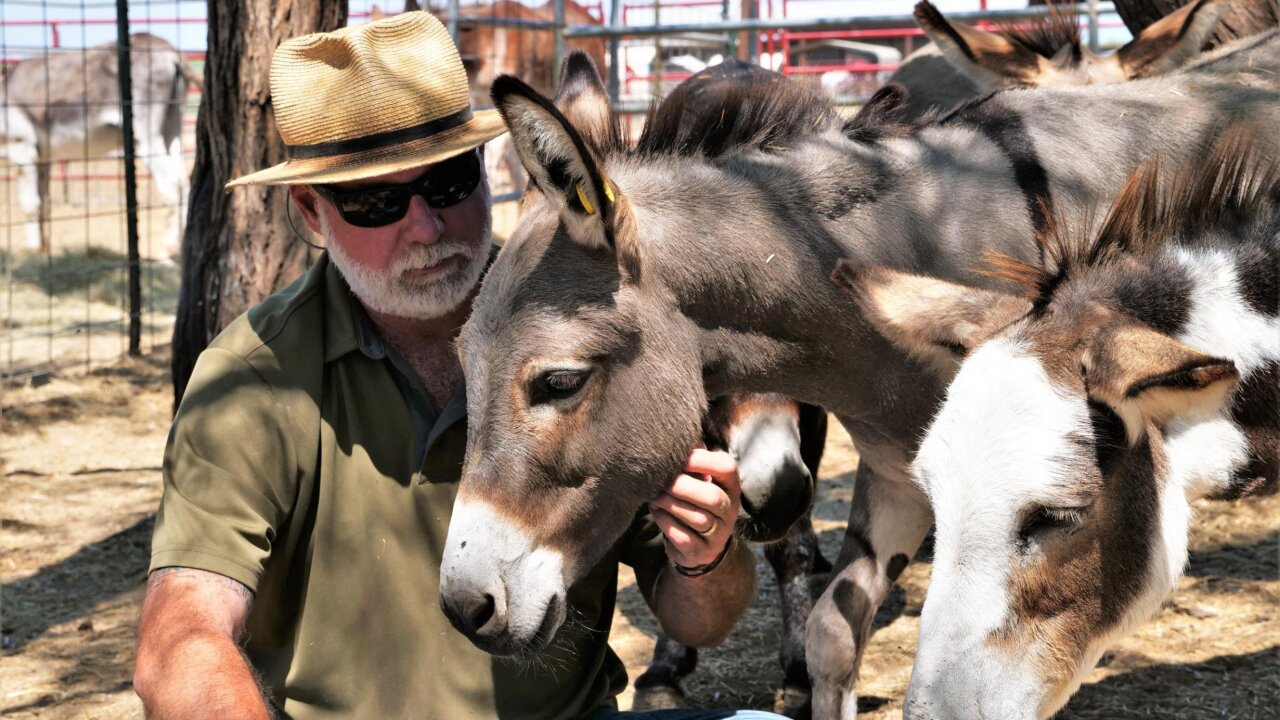 “Ask anyone about donkeys and they will probably tell you they are stubborn, stupid and dangerous,” he said.

But, for Meyers — who has dedicated his life to rescuing these creatures — that couldn’t be further from the truth.

“They are one of the smartest animals,” Meyers said. “They are playful and protective. They’re like big dogs.”

A donkey is domesticated; those roaming in the wild are called burros. Because of the misconception, these animals often face mistreatment and abuse.

Many donkeys are purchased or adopted by people who ultimately can’t properly care for them, resulting in ill treatment. And when burros overpopulate and damage areas of the western United States, they are rounded up and sent to corrals to manage their numbers.

Meyers didn’t always feel so strongly about donkeys. In 1999, he was living outside Los Angeles and working as an electrical contractor when his wife bought a donkey as a companion for their dog. They named the donkey Izzy.

“We fell in love with her,” Meyers said. “She opened our eyes to the donkey problem. We started noticing donkeys in need everywhere.”

The couple started buying abused or neglected donkeys — they had overgrown hooves, some were malnourished, and others were so badly beaten that if Meyers touched them, they’d start shaking and fall.

“We decided that either we have a problem or we’re going to have to find a way to find homes for these donkeys,” he said.

They gave up their careers and moved to a ranch outside San Angelo, Texas. Today, they have the largest donkey sanctuary in the US, known as Peaceful Valley Donkey Rescue.

The nonprofit has rescued 13,000 donkeys and burros to date and has expanded to two additional ranches in Virginia and Arizona. Together, the three ranches can handle 3,000 of these animals at a time. The organization also has smaller satellite adoption centers across the country.

The group trains the donkeys with the goal to place them in good homes. Each year, the organization adopts out roughly 400 donkeys.

“We’re saving them. We’re improving their lives that, at the end of the day, makes up for some of the atrocities. I know they have value. I know their contributions to our country,” Meyers said. “I want to see every donkey find its happy place, its peaceful place.”

CNN’s Meghan Dunn spoke with Meyers about his work. Below is an edited version of their conversation.

CNN: Why is it harmful that donkeys are misunderstood?

Mark Meyers: Donkeys have literally built this country on their backs from crossing the Rio Grande 178 years before we signed the Declaration of Independence. They were the frontrunners of all the railroads because they could only get into the areas with the explosives so that the bigger animals could bring up the tracks and everything else.

Yet somehow, we’ve managed to write them out of our history. They’re the joke, right? Bugs Bunny turned into a donkey when he did something stupid. Pinocchio turned into a donkey when he was overindulgent. The perception that donkeys are stupid and stubborn is really detrimental to their survival, in my opinion. Because if they are so stupid, so stubborn, they’re not worth saving.

CNN: In addition to the donkeys on your ranches, you have a separate project to help other donkeys. How does that work?

Meyers: Project Sanctuary’s whole mission is to provide sanctuary for those that aren’t capable of being adopted. We have people who lease their lands to put our donkeys on. We can put 2,000 to 3,000 donkeys on sanctuary within three months. They still get all the stuff they need, but it puts them in a happy place. So, if you’re aggressive, if you are angry, maybe sanctuary is where that donkey needs to go and chill out. That doesn’t mean you’re going to be there forever. Every couple of months, we’re going to come and see if you’re in a different headspace, and we might move you into another division. And that division might be special needs, might be adoption, who knows?

Without Project Sanctuary, I’m limited. If I was limited to just San Angelo, Virginia, and Arizona, that would be a really hard cap on how many donkeys I can save.

CNN: How do you prepare a donkey for adoption?

Meyers: We can’t just send a wild donkey into somebody’s home and think it’s all going to work out in the end. We have more trainers on staff than we have anything else because that’s the most important part. A successful adoption is where the donkey and the people bond, and they literally can’t live without each other. And the only way we can do that is if we provide a donkey that is friendly, likes people.

They have to accept a halter, walk on a lead and pick up their feet for trimming. That’s going to be a successful adoption because that person’s veterinarian will work on that donkey. Vets won’t work on wild donkeys. Farriers won’t trim wild donkeys. That’s what leads to the neglect that we deal with so often. It’s important that the finished product is this incredible animal that you literally just fall in love with.

Want to get involved? Check out the Peaceful Valley Donkey Rescue website and see how to help.