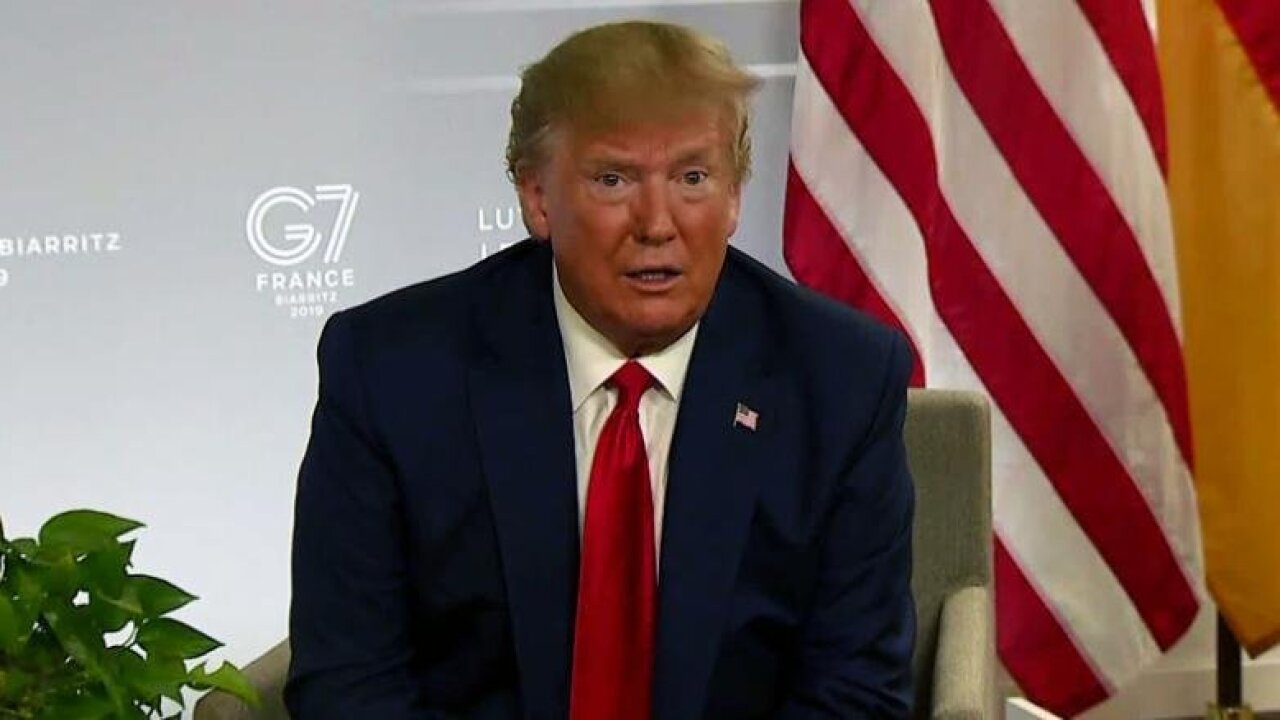 President Donald Trump said Monday that he is “possibly” looking at hosting the next G7 summit at his Trump National Doral Miami Golf Resort.

After a confusing day of mixed signals on trade and Iran, US President Donald Trump began his final round of talks at the Group of 7 summit on Monday eager to put a positive spin on his agenda.

President Donald Trump said Monday that he is “possibly” looking at hosting the next G7 summit at his Trump National Doral Miami Golf Resort.

He said he’d received word from China that its negotiators are ready to return to trade talks, even after his aides spent Sunday insisting Trump wants higher tariffs on Chinese products. And he shrugged off a surprise visit a day earlier from Iran’s foreign minister, saying he knew it was happening and didn’t interpret it as a sign of disrespect.

“It’s been really good. It’s not quite over yet, but I will tell you we have had great unity,” he said before a meeting with German Chancellor Angela Merkel.

But even in that session, differences were apparent. Merkel said there is “a long way to go” before a solution for Iran is reached. And she said she’d be “very glad” if the US and China can end their bitter trade war.

Trump seemed to suggest there was a better chance of that happening after a set of phone calls overnight. He also appeared to allude to comments from China’s vice premier, who said China would “adopt a calm attitude” in trade negotiations.

“One of the reasons China’s a great country is they understand how life works,” Trump told reporters during a morning meeting alongside Egypt’s president Abdel Fattah el-Sisi, saying his trade team received phone calls from Beijing expressing a desire to restart talks. “I have great respect for it. This is a very positive development for the world.”

China’s foreign ministry, however, didn’t mention any phone calls in a briefing on trade. And later, Trump and Treasury Secretary Steven Mnuchin refused to elaborate on the calls’ substance.

“There were discussions that went back and forth and let’s just leave it at that,” Mnuchin said.

Still, talk of resuming discussions with China was a hopeful moment amid otherwise bitter trade disputes at the G7, where Trump has been a man alone in his insistence that tariffs can produce a trade truce rather than rattling the global economy.

Already, US and Chinese negotiators were set to meet again next month, so the development Trump touted on Monday didn’t itself amount to a breakthrough. But any sign the two sides are continuing to work toward a deal comes as a welcome development for other G7 leaders, who blame the protracted trade war for weighing down growth.

“We will see what happens but I think we will make a deal,” Trump said.

The note of optimism aside, there was little evidence Trump was preparing acts of conciliation that might help the group of leaders put on a show of unity on their final day of talks. Instead, disputes over trade, foreign policy and climate change were readily apparent, even as Trump maintained the summit was without discord.

He’ll end the day with a joint press conference alongside his host, French President Emmanuel Macron, who has made a point of pushing forward on issues where his disagreements with Trump are obvious. That included a surprise appearance by the Iranian foreign minister, whose arrival in Biarritz on Saturday caught some US officials off-guard. Macron informed his fellow leaders that Mohammad Javad Zarif would make the visit only the night before he arrived.

Trump maintained a neutral view of the development on Monday, saying he was not surprised and had even given Macron his approval to push forward with planning the Zarif visit.

“Macron spoke with me, he asked me,” Trump said. “I said if you want to do it that’s okay. I don’t consider that disrespectful at all, especially when he asked me for approval.”

Still, Trump said he felt it was too early for a meeting with Zarif himself. And he continued to trash the Iran nuclear deal, an accord that European leaders are working to salvage after Trump withdrew.

Iran has been one of several points of contention for leaders here. Another has been climate change, the focus of a midday session Monday.

Trump was absent from the start of the session, his chair sitting empty while other leaders began the talks. Ahead of the G7, US officials said the President viewed sessions devoted to climate change and oceans a poor use of time, preferring instead to focus on the economy.

At the past two G7s, Trump has dashed his counterparts’ attempts to put forward a show of unity on the issue.

Trump’s aides have huffed that the summit’s agenda is an attempt to bolster Macron politically while isolating the United States. Whatever the intent, the effect has been to separate Trump from other leaders at a moment of global anxiety.

Nowhere has that been more evident than on trade, a topic Trump injected with new confusion on Sunday. After appearing to soften on his beloved tariffs, telling reporters he had “second thoughts”about the punishing trade war, his aides swooped in to explain he was merely stating misgivings about not applying harsher duties.

The attempts at cleanup weren’t welcomed by other leaders, who were cautiously cheered to learn Trump might be rethinking his approach to global trade. Instead, Trump has argued in meetings and dinners they should join him in applying tariffs on China in an attempt to force Beijing to change some of its economic practices.

Interactions throughout the summit, held amid throngs of French vacationers concluding their summer holidays on the picturesque Basque coast, have been tense, according to officials from multiple countries. Trump has berated his counterparts on topics from Iran to trade to Russia, which he ardently argued during a Saturday evening dinner should be readmitted to the summit next year.

There have been some friendly moments. Trump greeted Merkel with a French-style double kiss on the cheek when they encountered each other during a family photo on Sunday. And Trump eagerly announced an “agreement in principle” on trade with Japanese Prime Minister Shinzo Abe, though final details were still being put down on paper.

But the strife between Trump and fellow leaders has been apparent. Even the leader closest to Trump, British Prime Minister Boris Johnson, admitted Sunday he opposed Trump’s trade war with China.

The President, however, has insisted the summit is proceeding happily — either blind to the obvious disagreements or willing to ignore them.

“In France we are all laughing at how knowingly inaccurate the U.S. reporting of events and conversations at the G-7 is,” he wrote Sunday evening on Twitter, after sending birthday greetings to the actor Sean Connery and retired television host Regis Philbin.

He appears to also be looking forward to next year’s summit, when it is his turn to host. He told reporters it would likely happen at his Doral golf resort, near the Miami airport.