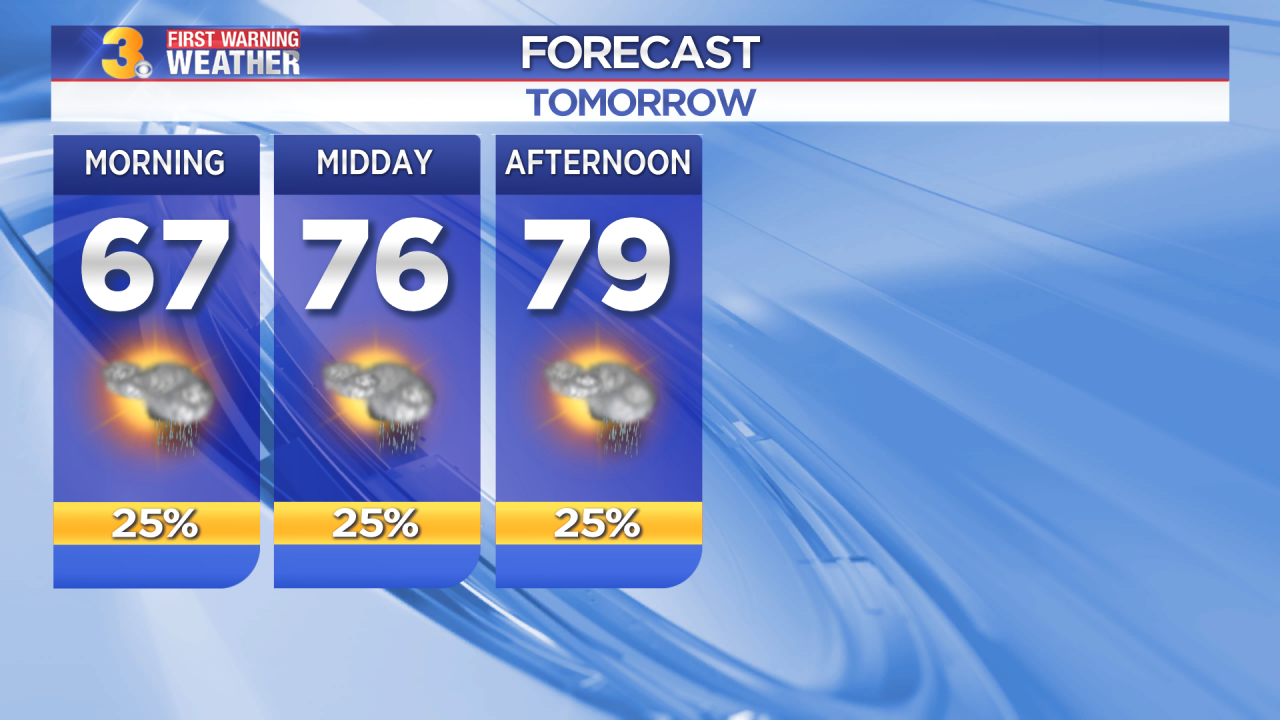 Another cool day on tap. Temperatures will once again struggle to get out of the 70s. It will be unsettled with a few showers possible. Skies will once again be mostly cloudy. It will be breezy with winds out of the northeast at 10-15 mph and gusts up to 25 mph. The persistent northeasterly wind could lead to some tidal flooding at times of high tide. High Tide at Sewells Point is around 10 AM. We also have a high risk of rip currents today, so the red flags will be flying.

So far in Norfolk, we’ve gotten 7.52 inches of rain in August, which is well above our normal for the month of 5.39 inches. While it has been a wet August, we are still a little over 3 inches away from being the 10th wettest August on record in Norfolk. We will definitely be adding to our rain totals due to another unsettled work week.

Next week will be interesting. We continue to monitor an area of low pressure in Florida, that could potentially turn tropical and move northeastward up the Atlantic coast. Right now, it has a 70 percent chance of turning tropical over the next 2 days. No matter what this will bring some unsettled conditions to our area. Keeping rain chances at least Monday through Wednesday. Temperatures will trend near-normal in the 80s.

Dorian is moving toward the west near 14 mph. The tropical storm is forecast to move generally west-northwestward at a similar forward speed for the next several days. On the forecast track, Dorian is expected to be near the central Lesser Antilles on Tuesday. Maximum sustained winds are near 40 mph with higher gusts. Gradual strengthening is forecast during the next few days, and Dorian could be near hurricane strength when it approaches the central Lesser Antilles on Tuesday.

A trough of low pressure extending from the coast of south-central Florida northeastward over the western Atlantic for a few hundred miles continues to produce a large area of disorganized showers and thunderstorms. Environmental conditions appear conducive for gradual development during the next few days, and a tropical or subtropical depression is likely to form early next week while the system moves northeastward over the Atlantic, offshore of the southeastern United States coast.

Satellite and surface observations show that the trough of low pressure over the far northwestern Gulf of Mexico has moved inland over the Upper Texas coast and western Louisiana. Although further development of this system is not expected, it will likely bring locally heavy rains to portions of Louisiana and eastern Texas during the next day or two