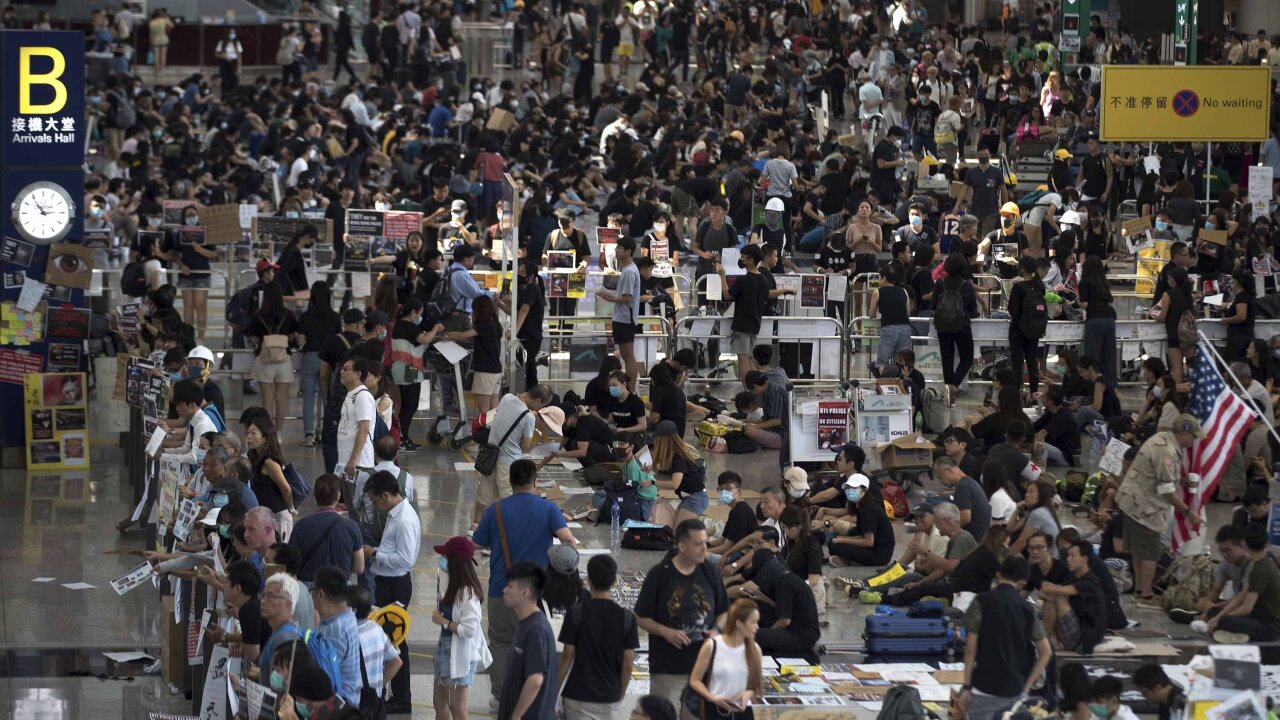 Hundreds of thousands of peaceful protesters of all ages returned to the streets of Hong Kong Sunday, in a massive show of solidarity for a movement that appeared on the verge of losing popular support.

Hundreds of thousands of peaceful protesters of all ages returned to the streets of Hong Kong Sunday, in a massive show of solidarity for a movement that appeared on the verge of losing popular support.

Protesters defied torrential rain, a police ban and menacing threats from the Chinese government to come back out for the 11th consecutive weekend of mass demonstrations. Organizers claimed as many as 1.7 million people joined the rally, with protesters thronging westwards from Victoria Park through the downtown areas, transforming much of the city center into a sea of slow moving umbrellas.

A police estimate put the number of people at the rally’s starting point at 128,000. CNN cannot independently confirm either figure.

The demonstration was widely viewed as a test of the movement’s durability following weeks of escalating violence between police and protesters. One of the slogans of the march was “Hong Kongers Assemble: Peaceful, Rational, and Non-Violent Protesters Stand Out.”

The rally was organized by the Civil Human Rights Front, a more traditional pro-democracy organization responsible for arranging two huge peaceful marches in June which attracted hundreds of thousands of participants.

Police had not given permission for protesters to march out of the park to Chater Garden in Central District as planned. But by 6 p.m. local time (6 a.m. ET) protesters had congested several main roads through the city’s main shopping area of Causeway Bay and some had pushed on to Admiralty district, near to the city’s Legislative Council offices.

The protest movement, which began in June over a now-shelved extradition bill, has since expanded to include calls for greater democracy and government accountability.

“I have no idea what comes next but all we can do as citizens is keep going, protest peacefully and let the government and regime know our demands,” said one protester, Louis, 43, who works in the IT industry.

Another protester, who gave his name as Howard, said he was protesting against perceived police violence. “We want the government to listen to us, withdraw the extradition bill and also have an independent panel investigating police abuse and those officers should be stood down,” he said.

“All these two months we have gone through a lot but we should not lose hope and we should keep fighting.”

A weekend of rallies

In a statement Sunday, the Hong Kong government reiterated calls to “restore social order” and suggested officials could begin dialogue with the public once “everything has calmed down.”

Hong Kong’s international image has suffered as a result of the ongoing protests, particularly disruption at the airport, and the government admitted this week that the economy is suffering.

Sunday’s peaceful march followed ugly scenes at the city’s airport Tuesday, when a small group of protesters detained and beat two men they accused of being undercover police officers, and violently clashed with riot police.

But there are signs that the protesters are aware of the damage the violence has caused.

Saturday, tens of thousands of protesters participated in a peaceful, pro-democracy march in Kowloon with the aim of “reclaiming the tranquility of the neighborhood,” organizers told CNN. Protesters marched from To Kwa Wan to Hung Hom: two areas that have recently seen an influx of Chinese mainland tourists.

Later on, a group of protesters broke off and gathered in front of the police station in nearby Mong Kok — one of the world’s most densely populated areas. After police began clearing them out, the protesters left without further confrontation.

In a separate part of town, an estimated 22,000 Hong Kong school teachers and supporters attended a morning march to the Chief Executive’s residence as part of anti-government demonstrators, according to organizers.

Meanwhile, about 108,000 people participated in a pro-police rally in Tamar Park, near to the Legislative Council offices, police said. Supporters of the police held banners such as “Save Hong Kong,” “Police add oil” and “Hong Kong add oil.”

Ahead of Sunday’s rally, video surfaced appearing to show Chinese police and armed police forces holding a joint training in the neighboring mainland city of Shenzhen, according to Chinese state media People’s Daily.

In a video, police can be heard chanting “Stop the violence and repent” in Cantonese and “We listen to the party’s command! We can win the battle! We forge exemplary conduct!” in Mandarin Chinese, a standard chant of the Chinese Army.

There is no indication that the Chinese military or People’s Armed Police members are set to enter Hong Kong. But state media has repeatedly brought up that possibility and propaganda videos of soldiers training in makeshift riot scenes have been heavily promoted by the government in the mainland.

Hong Kong police remained noticeably absent from the demonstration, Sunday, with only a small contingent of riot police around the Chinese Liaison office in Sheung Wan.

Forceful police tactics used during previous protests have spurred greater demonstrations. Last weekend saw tear gas fired inside a subway station and a woman allegedly hit in the face with a beanbag round, outraging protesters and driving turnout at the airport just as things appeared to be calming down somewhat.

Speaking to CNN at a background briefing this week, senior police officers defended their use of force in response to what they characterized as violent, criminal behavior, and rejected calls for an independent investigation into their handling of the situation.

They also stood by the use of undercover officers to snatch protesters during last weekend’s violence, action which helped fuel the paranoia and suspicion at the airport on Tuesday.