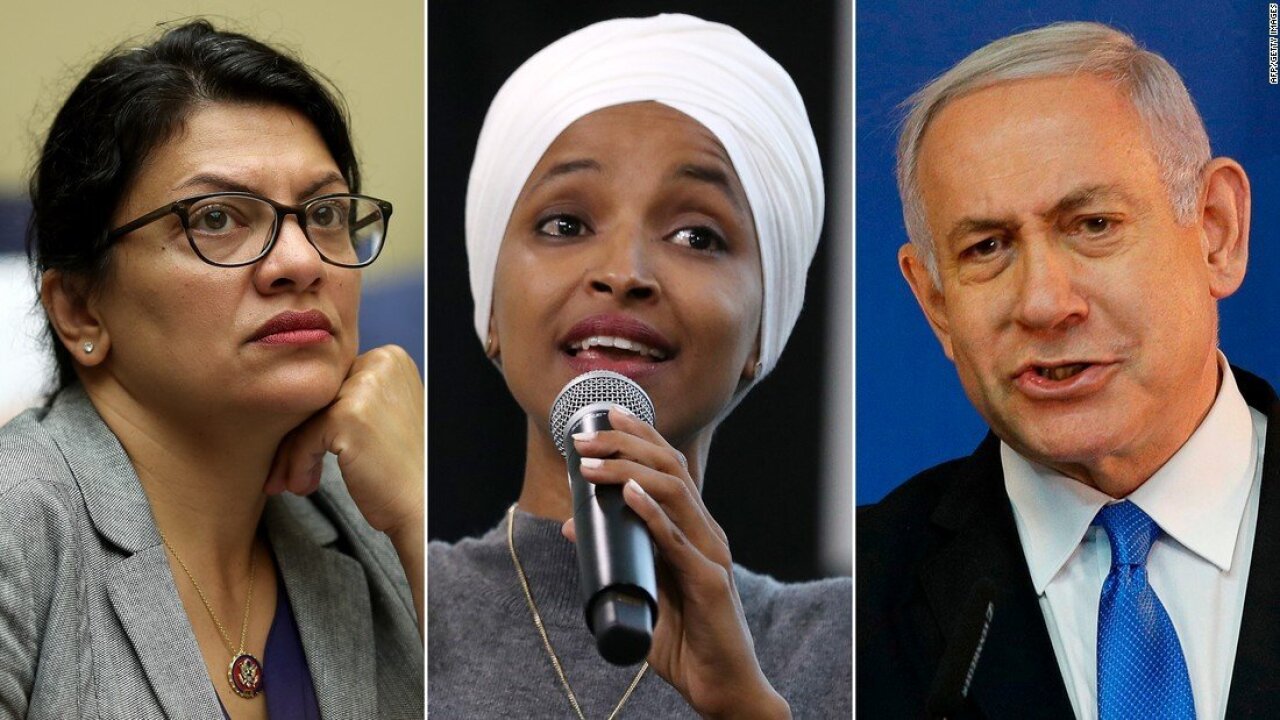 Israel is considering barring two Democratic congresswomen — Reps. Rashida Tlaib and Ilhan Omar — from an upcoming visit to Israel and the Palestinian territories because of their support for a boycott against Israel, according to an Israeli government official.

Israel announced Thursday it was barring the entry of two Democratic US congresswomen after Donald Trump encouraged the move, a remarkable step both by the US President and his ally, Israeli Prime Minister Benjamin Netanyahu, to punish political opponents.

Israel is considering barring two Democratic congresswomen — Reps. Rashida Tlaib and Ilhan Omar — from an upcoming visit to Israel and the Palestinian territories because of their support for a boycott against Israel, according to an Israeli government official.

Deputy Foreign Minister Tzipi Hotovely told CNN on Thursday of Israel’s decision to ban Reps. Rashida Tlaib of Michigan and Ilhan Omar of Minnesota from entering the country. The announcement came shortly after Trump said Israel would be showing “great weakness” by allowing them to enter the country.

“The plan of the two Congresswomen is only to damage Israel and to foment against Israel,” Netanyahu said in a statement following the decision.

The intervention by Trump into Israel’s decision-making was extraordinary enough. But the move by Netanyahu’s government lent the longstanding US-Israel alliance a new partisan tinge and opened the door for fresh criticism.

Omar responded to the decision Thursday by calling it “an affront” and “an insult to democratic values.”

“It is an affront that Israeli Prime Minister Netanyahu, under pressure from President Trump, would deny entry to representatives of the U.S. government,” Omar said in a statement. “Trump’s Muslim ban is what Israel is implementing, this time against two duly elected Members of Congress.”

Omar went on to say, “As a member of the House Committee on Foreign Affairs, it is my job to conduct oversight of foreign aid from the United States of America and to legislate on human rights practices around the world. The irony of the ‘only democracy’ in the Middle East making such a decision is that it is both an insult to democratic values and a chilling response to a visit by government officials from an allied nation.”

Related: Rashida Tlaib: ‘I’m not going nowhere, not until I impeach this President’

Trump’s history feuding with the congresswomen

Trump has criticized the two lawmakers — who are the first two Muslim women elected to Congress — in harsh and sometimes racist terms. But his move to call for their ban in Israel reflects a new chapter in his grudge and a further erosion of presidential norms, which in the past sought to avoid instilling partisanship in foreign affairs.

In considering the ban, Israel cited the congresswomen’s support for a boycott against Israel.

“The State of Israel respects the American Congress in the framework of the close alliance between the two countries, but it is unthinkable that an entry to Israel would be allowed to those who seek to damage the State of Israel, even during a visit,” said Interior Minister Aryeh Deri in a statement. Under Israeli law, the interior minister is the one authorized to make a decision on barring entry.

Deri said he made the decision with the support of Netanyahu and other Israeli officials.

US Ambassador to Israel David Friedman said the US “supports and respects” Israel’s decision to deny entry to Tlaib and Omar.

“This trip, pure and simple, is nothing more than an effort to fuel the (boycott movement) engine that Congresswomen Tlaib and Omar so vigorously support,” Friedman said in a statement released Thursday evening.

Slamming the boycott movement as “economic warfare designed to delegitimize and ultimately destroy the Jewish State,” Friedman defended Israel’s right to deny entry to those who support a boycott of the country.

Israel’s decision to deny entry to the two freshmen congresswomen amounted to a reversal of a position taken last month when Israeli Ambassador to the United States Ron Dermer said the two would be allowed to visit Israel and the Palestinian territories.

“Out of respect for the U.S. Congress and the great alliance between Israel and America, we would not deny entry to any member of Congress into Israel,” Dermer said at the time in widely reported comments. Dermer is considered one of those closest to Netanyahu.

The move was met with a swift backlash from Democratic congressional lawmakers, including House Speaker Nancy Pelosi of California, who said in a statement she was “deeply saddened” by the news.

In a statement, Senate Minority Leader Chuck Schumer, a New York Democrat, called the decision a “sign of weakness, not strength,” and said, “It will only hurt the U.S.-Israeli relationship and support for Israel in America. … Many strong supporters of Israel will be deeply disappointed in this decision, which the Israeli government should reverse.”

House Majority Leader Steny Hoyer of Maryland, the No. 2 House Democrat, in a statement called the decision “outrageous” and said the move “is contrary to the statement and assurances to me by Israel’s ambassador to the United States that ‘out of respect for the U.S. Congress and the great alliance between Israel and America, we would not deny entry to any Member of Congress into Israel.’ That representation was not true.”

Hoyer has been working since Wednesday to persuade the Israeli government to permit the two congresswomen entry, an aide to Hoyer told CNN. That effort included speaking directly with Netanyahu and Ambassador Dermer on Wednesday. Hoyer had also previously worked with the ambassador to secure the statement that no member would be denied entry.

The boycott movement, formally known as the Boycott, Divest, and Sanctions movement, aims to end international support for Israel because of its policies toward Palestinians, as well as its continued construction of West Bank settlements, considered a violation of international law.

Netanyahu further outlined his concerns, stating: “They have defined the destination of their visit as ‘Palestine’ and not ‘Israel.’ And unlike all the Democrat and Republican congressmen who have visited until today, they avoided asking for any meeting with any Israeli official, whether in the government or in the opposition.”

Tlaib and Omar have been vocal critics of Israel and have supported the boycott movement and voted against a House resolution condemning the movement, which received broad bipartisan support.

Last month, Tlaib tweeted that the resolution was “unconstitutional” and aimed to “silence” opposition to Israel’s policies.

Trump, who has a close relationship with Netanyahu, has repeatedly attacked both Tlaib and Omar, telling them last month to “go back” to the countries they came from. Tlaib was born in the United States, and Omar was born in Somalia and is a naturalized US citizen.

Trump called for Omar’s resignation in March after she suggested US support of Israel is motivated by money in remarks condemned by lawmakers on both sides of the aisle as anti-Semitic.

On Thursday, Trump said it would show “great weakness” if Israel allowed entry to Omar and Tlaib.

“It would show great weakness if Israel allowed Rep. Omar and Rep. Tlaib to visit,” Trump tweeted. “They hate Israel & all Jewish people, & there is nothing that can be said or done to change their minds. Minnesota and Michigan will have a hard time putting them back in office. They are a disgrace!”

Earlier, the White House had signaled the decision would be up to Israel.

“The Israeli government can do what it wants,” press secretary Stephanie Grisham said, adding that reports Trump told Netanyahu he thought the two congresswoman should be barred were “inaccurate.”

On Wednesday, the Israeli Prime Minister, interior minister, foreign minister, minister of internal security, the head of the national security council and the attorney general all met to discuss a final decision on the issue of the congresswomen’s visit, the sources said, which had been scheduled to take place from August 18 to 22.

Tlaib and Omar planned to visit one of the holiest and most sensitive sites in Jerusalem, known to Muslims as Haram al-Sharif and to Jews as the Temple Mount. The two lawmakers refused to be escorted by Israeli security while visiting the site, as they believe Muslims have a right to pray there, organizers in Israel and America told CNN.

A Democratic congressional aide with knowledge of the trip disputed that account, saying that the congresswomen had not refused Israeli security on a planned visit to the holy site. The aide also said Omar had planned to meet with former US Ambassador to Israel Dan Shapiro and members of Israel’s Knesset, though the aide did not specify which members.

The two congresswomen also planned to meet with Israeli and Palestinian peace activists and representatives of human rights organizations. They were to visit Jerusalem, Bethlehem, Ramallah and Hebron. There were no plans to meet officials, organizers said.

Tlaib planned to stay two extra days to visit her grandmother, who lives in the West Bank village of Beit Ur al-Tahta.

If Tlaib, who is the first Palestinian-American woman to serve in Congress, made a humanitarian request to visit her family in the West Bank, that would be allowed, the government official said.

But that decision would be separate from the decision to bar them from entering Israel.

Former Mayor of Jerusalem Nir Barkat, who is a member of Netanyahu’s Likud Party, said he would welcome the two congresswomen into the country, but only if they would “listen and learn.”

“If I would be convinced that they came to listen and learn in how this country works, how Jerusalem works, how our political system works,” Barkat told Israeli news channel i24NEWS on Tuesday, “I would consider it … convincing people that (Israel’s) path is the right path is the high road I think we should take.”