With no family, a husband worried few would attend shooting victim’s funeral. 700 strangers showed up 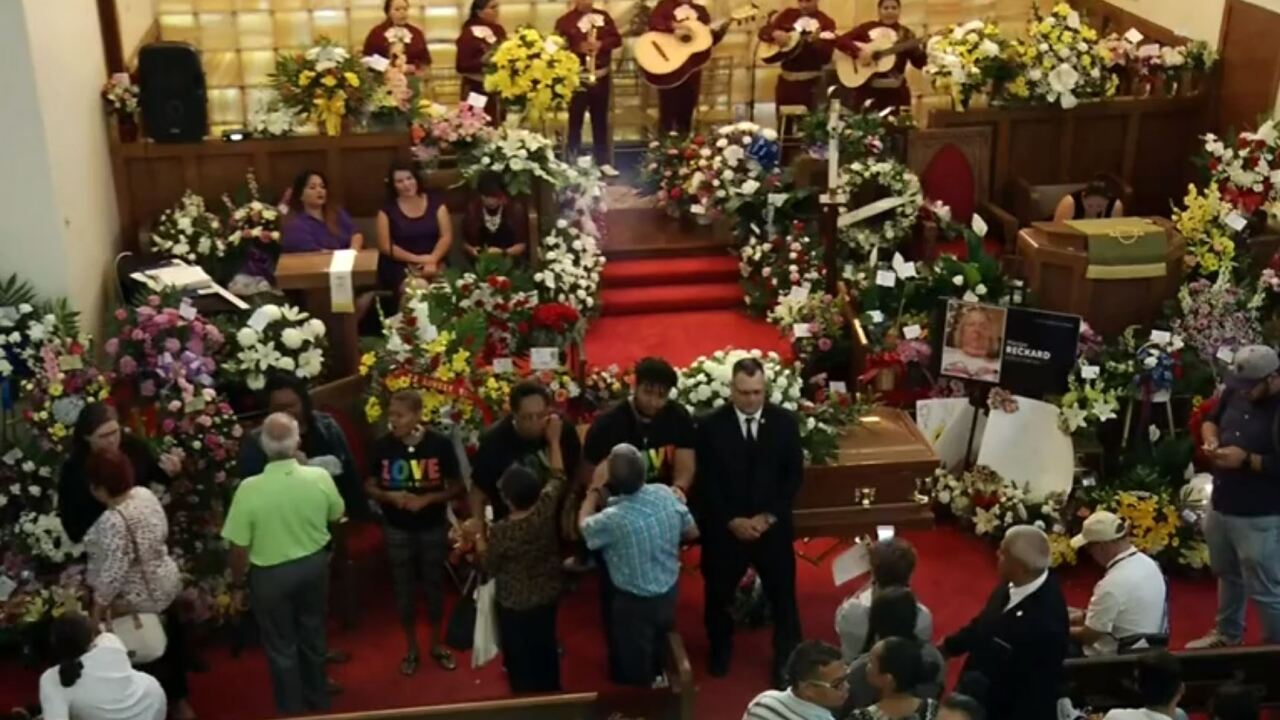 At first, it seemed like Margie Reckard’s funeral would be a small affair.

The 63-year-old, who was killed when a gunman opened fire in an El Paso Walmart this month, left behind few relatives, and none live in El Paso. Her husband, Antonio Basco, had no other family and invited anyone to show up.

Hundreds of people lined up outside and packed into the La Paz Faith Memorial and Spiritual Center in El Paso to attend Reckard’s visitation services Friday evening. At one point during the funeral Friday, 700 people were said to have been waiting outside despite the nearly 100-degree heat, according to funeral organizers.

The venue for Friday’s services can hold up to 400 people.

At first, it seemed like Margie Reckard’s funeral would be a small affair. Now hundreds of people are expected to attend Reckard’s visitation services Friday evening.

“We will do the best we can to accommodate the crowd we have,” said Elizabeth Cordova of Perches Funeral Home.

Basco arrived at the funeral to a storm of applause and people hugging him. He stood at the front of the church near his wife’s casket for about two hours accepting hugs and kinds words from a procession of supportive funeral attendees.

Strangers from as far away as Japan and New Zealand sent flowers, which lined the outside of the church and the front of the alter. Almost 1,000 people have donated to a GoFundMe campaign to help Basco with expenses, raising more than $25,000.

One local florist said her business delivered more than 50 arrangements, with orders coming in from New York and Michigan. One of those arrangements came from the family of a victim of the Sandy Hook shooting.

“I’ve been in business over 30 years,” Sandy Blanco, owner of Debbie’s Bloomers, told CNN. “I’ve never seen any outpouring so beautiful, and an outpouring as large as this.”

One woman flew in from San Francisco

When Hala Hijazi heard about the open invitation to the funeral three days ago, she broke down. Seeing how much Basco loved his wife and how lost he is without her touched her heart, she said.

Without a second thought, Hijazi cleared her calendar and booked a flight to El Paso from San Francisco.

Hijazi said that “all the rhetoric that’s going on in this world” makes her want to show kindness. And if she gets a chance to talk to Basco at the funeral, she wants to thank him.

“I thank him for showing us what love is. Showing us how strong to be. Showing us it’s OK to ask,” she said.

Her husband visits her memorial every day

Since the massacre that took the love of his life, Basco has visited the makeshift memorial behind Walmart daily, coming and going at all hours. He leaves fresh flowers each day at the site of a white cross bearing his wife’s name and removes any that are dying. Sometimes, he talks to her.

“I promised her fresh roses every day,” Basco said.

Basco met Reckard at a bar 22 years ago. She had been smiling at him that night, and he eventually worked up the courage to approach her. A drink and friendly conversation soon turned into a dinner.

“Me and my wife had a bond, a magnificent bond,” Basco said. “I never felt anything like that in my life.”

The couple soon became inseparable, traveling around the country until they eventually settled in El Paso. They took care of each other as they grew older and as Reckard began battling Parkinson’s disease.

On August 3, Reckard headed to the Walmart near Cielo Vista Mall for groceries. It was the last time Basco saw her alive. After the massacre, he searched hospitals for hours. A day later, law enforcement officers told him his wife was among the murdered.

Now that the time has come to lower his wife into the ground, Basco fears he may break down.

Knowing so many people will be there to help him grieve has been a “good feeling,” Basco said. He didn’t imagine he’d see an outpouring of support this massive, but he said he knows everyone who attends his wife’s services will realize how special she was.