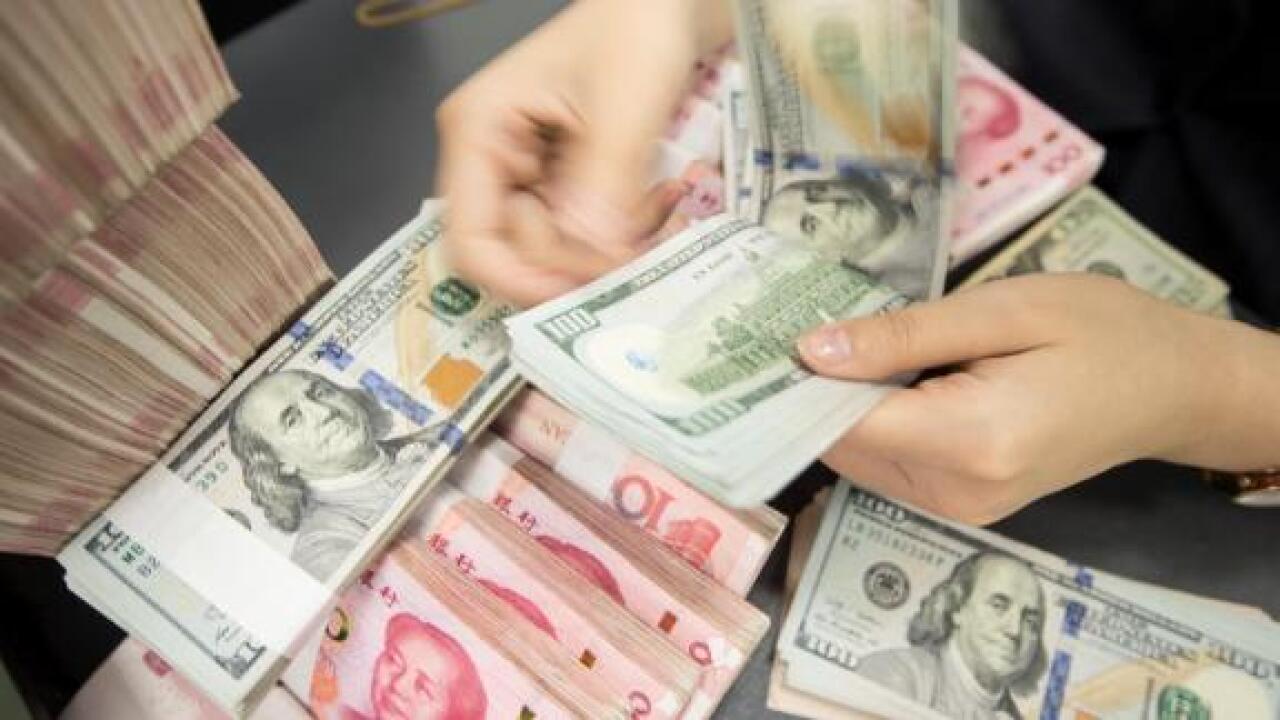 A Chinese bank employee counts 100-yuan notes and US dollar bills at a bank counter in Nantong in China’s eastern Jiangsu province on August 6, 2019. – The Chinese currency steadied on August 6, a day after Beijing let the yuan weaken against the dollar, sending markets into freefall and leading the US to formally designate China a “currency manipulator”. (Photo by STR / AFP) / China OUT (Photo credit should read STR/AFP/Getty Images)

Five big economies are at risk of recession. It won’t take much to push them over the edge.

Mexico just dodged a recession— usually defined as two consecutive quarters of contraction — and its economy is expected to remain weak this year. Data suggest Brazil slipped into recession in the second quarter.

Each economy ranks among the largest 20 in the world. Singapore and Hong Kong, which are smaller but still serve as vital hubs for finance and trade, are also suffering.

While growth has been dragged lower in each country by a specific cocktail of factors, a global manufacturing slump and a sharp drop in business confidence have made matters worse.

China’s massive economy is growing at the slowest pace in nearly three decades as the country wages a prolonged trade war with the United States, which will impose new taxes on Chinese exports in September and December.

The International Monetary Fund last month cut its forecast for global growth this year to 3.2%, the weakest rate of expansion since 2009. It also downgraded its expectations for 2020 to 3.5%.

Investors are increasingly worried. The bond market is flashing warning signs and more than a third of asset managers surveyed by Bank of America expect a global recession in the next 12 months.

Germany relies heavily on exporters that sell a disproportionate amount of goods to China and the United States. Lackluster global auto sales have also hit its carmakers.

While fears of a chaotic Brexit are helping to drag down the German economy, that issue is causing the most pain in the United Kingdom, where the economy is shrinking for the first time since 2012.

The British economy should rebound in the third quarter and avoid an immediate recession. But if Prime Minister Boris Johnson pulls the country out of the European Union without a deal to protect trade on October 31, a recession would likely be unavoidable.

In Italy, weak productivity, high youth unemployment, huge debt and political turmoil are to blame for its continued malaise.

Investment has dropped in Mexico and the country’s services sector is under pressure. Brazil, the largest economy in Latin America, is suffering from weak industrial production and high unemployment. Data due in the coming weeks will confirm whether it has fallen into recession.

Shearing argues that some of the gloom and doom is unjustified. At a global level, he says, spending by companies on assets such as equipment have stabilized. The labor market is resilient.

“While there are pockets of extreme weakness in the world economy — particularly in manufacturing — other parts are holding up relatively well,” he said. “All of this is consistent with our view that global growth is slowing rather than collapsing.

Yet he also points to three big risks.

The first is the trade war. If Beijing and Washington continue to ratchet tensions higher, business confidence could plummet. The International Monetary Fund has warned that growth in 2020 would be slashed by half a percentage point if the dispute escalates further.

Another big risk is that central banks fail to act, causing a negative reaction in financial markets that feeds through to the real economy. The US Federal Reserve cut rates last month for the first time in 11 years, and the European Central Bank has hinted that it will unleash more stimulus in September. Pressure is building on China to cut its main interest rate for the first time in four years.

Other central banks from India to Thailand have slashed rates, and more cuts are expected.

The final risk is that the global services sector, which has supported growth, begins to mirror the downturn seen in manufacturing.