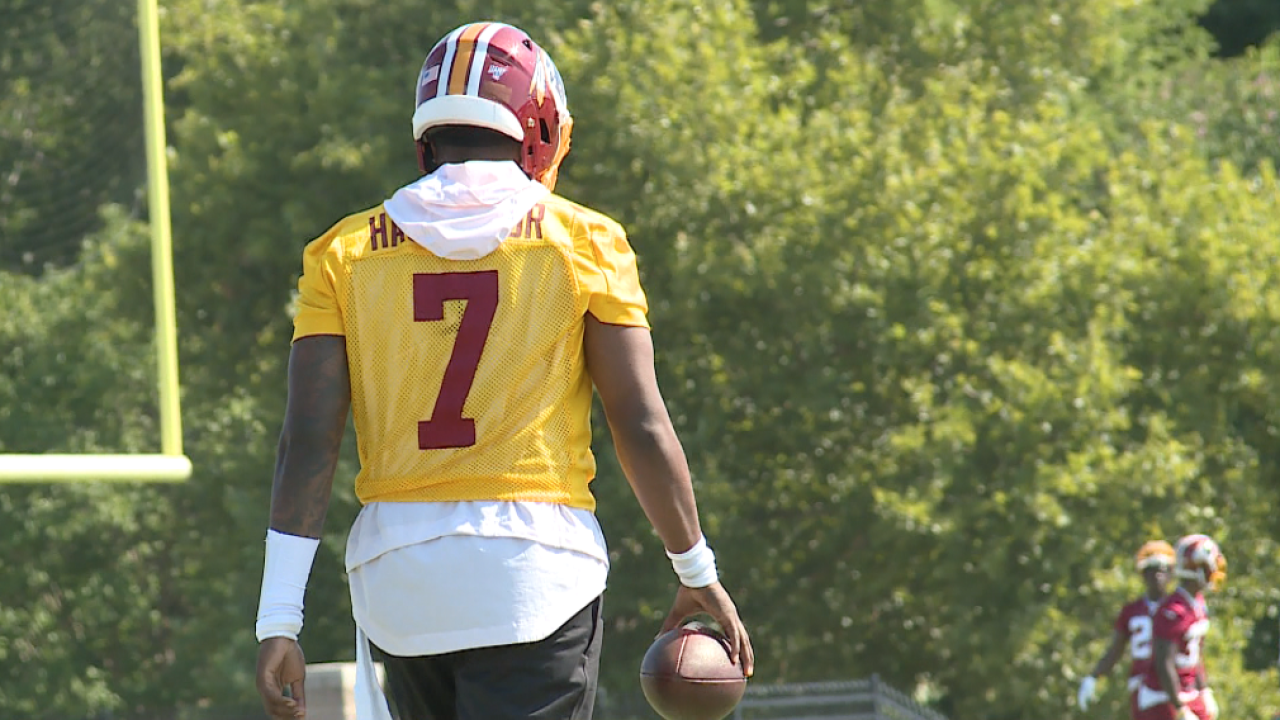 RICHMOND, Va. – Washington Redskins quarterbacks don’t have the luxury of getting a lot of reps this training camp. In a three-way competition between Colt McCoy, Case Keenum and Dwayne Haskins, there’s a lot of rotation between the three.

“Finding a rhythm is hard when you don’t go as often as a one or a two,” Haskins said. “Just trying to figure out ways to hit a stride and keep getting better. I’m just trying to find every little nuance whether it’s throwing extra after practice, staying longer after a meeting or whatever it is necessary for me being ready to play.”

There’s a lot of pressure on Haskins to be ready to play, not necessarily from inside the Redskins organization, but from those on the outside looking in. As Washington’s first-round selection in the 2019 NFL draft, many view him not just as the quarterback of the future, but the quarterback of now.

“I’m not a seven, ten-year vet, so of course those guys have a better understanding of what they’re doing,” Haskins said. “But, I mean, I use that as an advantage because I can ask them, ‘What are you seeing? How would you handle this? And they do a great job helping me, so, I mean, I know that I’m going to play when it happens, I’ve got to be prepared and ready for it. But, I’m rooting for everybody – rooting for Colt [McCoy], rooting for Case [Keenum], rooting for everyone and want everybody to do well.”

While Haskins is new to the league, he’s not new to playing under center, something that he did in high school. He had more experience in shotgun formation while playing at Ohio State, but he’s excited about the change that comes with Washington’s offensive formations.

“I actually think it’s easier for me to be under center because it makes me tempo my drop better, makes it easier to time up a route because we’re in sync,” Haskins said. “When you’re in shotgun it’s all about getting the snap, how do you catch the ball, and how do you identify the safety and it really has to be fast on your feet in shotgun. I like under centers because one, I’m tall and then two, I can just push back for depth to see the field.”

We're confident Dwayne Haskins' #NFL debut will go better than his rookie skit at #SkinsCamp. Because it can't go worse…