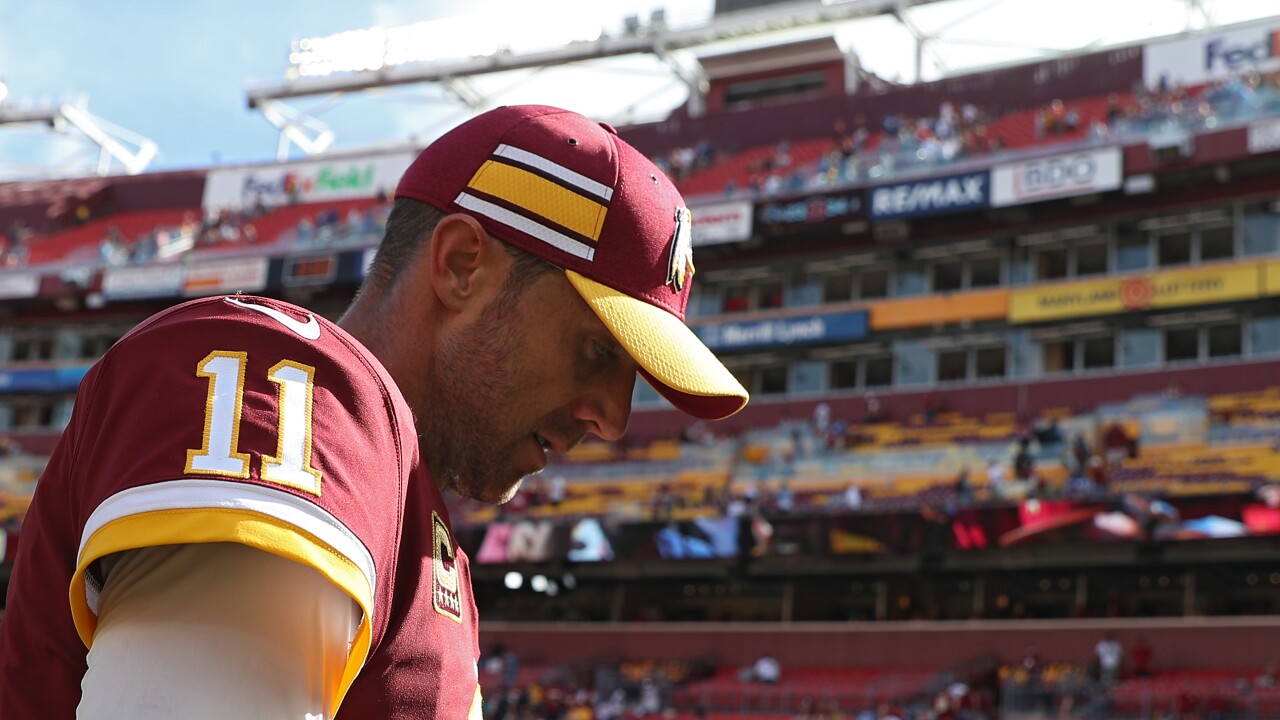 LANDOVER, MD – SEPTEMBER 16: Quarterback Alex Smith #11 of the Washington Redskins walks off of the field after losing to the Indianapolis Colts at FedExField on September 16, 2018 in Landover, Maryland. (Photo by Patrick Smith/Getty Images)

RICHMOND, Va. – Despite still being in the midst of a grueling recovery process, Washington Redskins quarterback Alex Smith is a consistent presence in the team’s quarterback room.

Alex Smith tells Redskins.com’s Larry Michael that he’s been in every meeting, going through the process as if he was preparing to take the field each day of training camp.

Smith’s been able to take on a ‘coach’ role with the three quarterbacks competing for the starting job: Case Keenum, Colt McCoy and Dwayne Haskins.

“There’s a lot of voices [in the quarterback room] and for me I try to select my words carefully,” Smith said.

Smith is still on crutches, but he’s able to get upper body workouts in with the Redskins’ training staff. He throws every day as well, but does it while seated because it becomes hard to throw while standing on crutches.

“When you get that stuff taken away from you for a little while you forget what it’s like,” Smith said. “How much I enjoy just breaking a sweat and getting some work in, and so that’s been a nice release for me.

“I don’t think I ever anticipated what this road would be like. I get my head set on certain timelines, and then you realize those are not set in stone, and very flexible and moving. Getting accustomed to that and just trying to get the most out of every day, stay short-sighted, not get ahead of myself.”

Alex Smith spoke to The Voice of the #Redskins Larry Michael on his recovery, his role in the quarterback room, what he thinks of the team so far and more. pic.twitter.com/Od6wP88M6L

Smith is happy with what he’s seen from the Redskins this training camp, especially the young guys.

“I think we’re sitting in a great situation. I think we have the talent, the ability, the guys the character, leadership to absolutely do what we want to do,” Smith said. “I think any successful team is gonna get production from their rookie class. You have to have some of these guys that, they need to step up and be playmakers for us to contribute and I think I’m excited about that, excited about the rookie class, the guys we have out here and what they can bring, the added depth that they bring.”

Watching his team come together during training camp reminds him of how much he loves to compete this time of year.

Another appearance from Alex:

“The older you get I think the more you realize how precious these situations are,” Smith said. “It’s not gonna last forever. Being down here I think, if anything, has only encouraged that for me. You only have so many years left, and to have this challenge set out in front of me, I mean how often do you get a challenge like that to try to overcome.

“I still feel like I’m young at heart, and got a lot left ahead of me and want to take that on.”