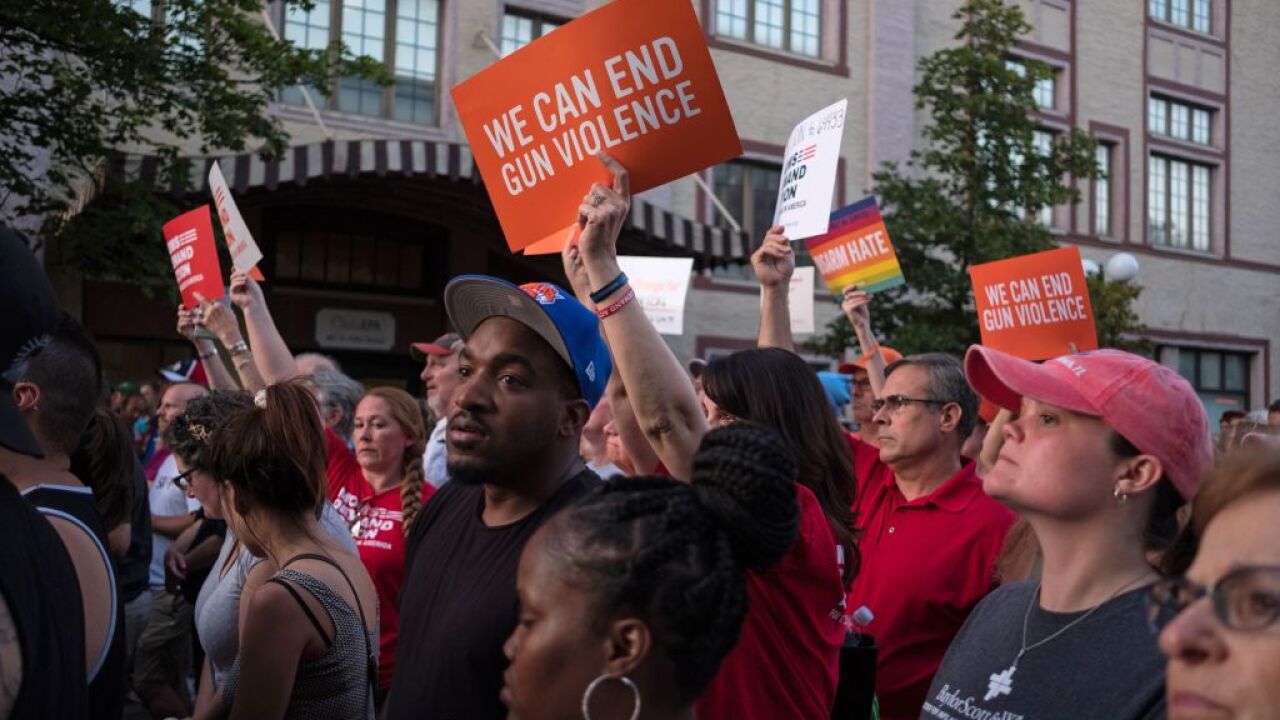 People hold signs as they take part of a candle lit vigil in honor of those who lost their lives or were wounded in a shooting in Dayton, Ohio on August 4, 2019. – The United States mourned Sunday for victims of two mass shootings that killed 29 people in less than 24 hours as debate raged over whether President Donald Trump’s rhetoric was partly to blame for surging gun violence. The rampages turned innocent snippets of everyday life into nightmares of bloodshed: 20 people were shot dead while shopping at a crowded Walmart in El Paso, Texas on Saturday morning, and nine more outside a bar in a popular nightlife district in Dayton, Ohio just 13 hours later. (Photo by Megan JELINGER / AFP) (Photo credit should read MEGAN JELINGER/AFP/Getty Images)

The US has struggled to confront the rise of domestic terrorism threats, drawing concern from lawmakers and former officials that there is a lack of a cohesive strategy to deal with the problem and the limited resources available skew towards international efforts.

The FBI has seen a significant rise in the number of white supremacist domestic terrorism cases in recent months, a senior bureau counterterrorism official told CNN recently. Congress and the executive branch, critics say, have been slow to react.

DHS funding for efforts aimed at countering violent extremism were also found to be significantly lower than other western democracies, according to the study.

The administration has also made changes to federal funding for grants meant to counter violent extremism and the staff in the Homeland Security office that administers them has been diminished.

On Sunday, US Attorney for the Western District of Texas John Bash said the Justice Department is treating the El Paso shooting that took the lives of at least 20 people over the weekend as a “domestic terrorist case” — placing an issue this administration, like those before it, has had to contend with at the forefront.

Despite the rise in domestic cases, there is no federal charge for “domestic terrorism.” The US doesn’t have a domestic terrorism law and no government agency designates domestic groups as being terrorist organizations. That means many cases the FBI calls domestic terror-related end up with a variety of charges for violations of laws related to guns or even other state charges.

For instance, in several past race- and religion-motivated mass shootings by extremists, like at a Charleston, South Carolina, church in 2015 and at the Tree of Life synagogue in Pittsburgh last fall, the shooters have faced hate crime and murder charges.

“We prosecute domestic terrorists for their criminal acts, not for their beliefs or based on their associations,” Brad Wiegmann, a deputy assistant attorney general with the Justice Department’s national security division, testified at a US House hearing in May. “The FBI opens cases on suspected criminal violations, not ideologies.”

In a statement Sunday night, the FBI said it “remains concerned that U.S.-based domestic violent extremists could become inspired by these and previous high-profile attacks to engage in similar acts of violence.”

When mass shooters in the US are linked to known international terrorist groups, terrorism charges then come into play. Critics say those laws disproportionately apply to Muslim extremists.

“Killing random civilians to spread a political message is terrorism,” former Deputy Attorney General Rod Rosenstein tweeted Sunday. “FBI classifies it as domestic terrorism, but “white terrorism” is more precise. Many of the killers are lone-wolf losers indoctrinated to hate through the internet, just like Islamic terrorists.”

Acting Homeland Security Secretary Kevin McAleenan in June testified in a congressional hearing that “white supremacist extremist violence” a “huge issue” and called it an “an evolving and increasingly concerning threat.”

Rep. Steve Scalise, a Louisiana Republican who was the victim of a mass shooting two years ago, also cited the internet, although he added a note about “mental health.”

“These events should be classified as domestic terrorism, and I’m glad that in the case of El Paso, the FBI is treating it as such,” he tweeted. “There is clearly a culture of death in America today. Violence is glorified and normalized on our screens every day. Instead of seeking professional help for mental health problems, men are being radicalized in online forums. This must stop.” 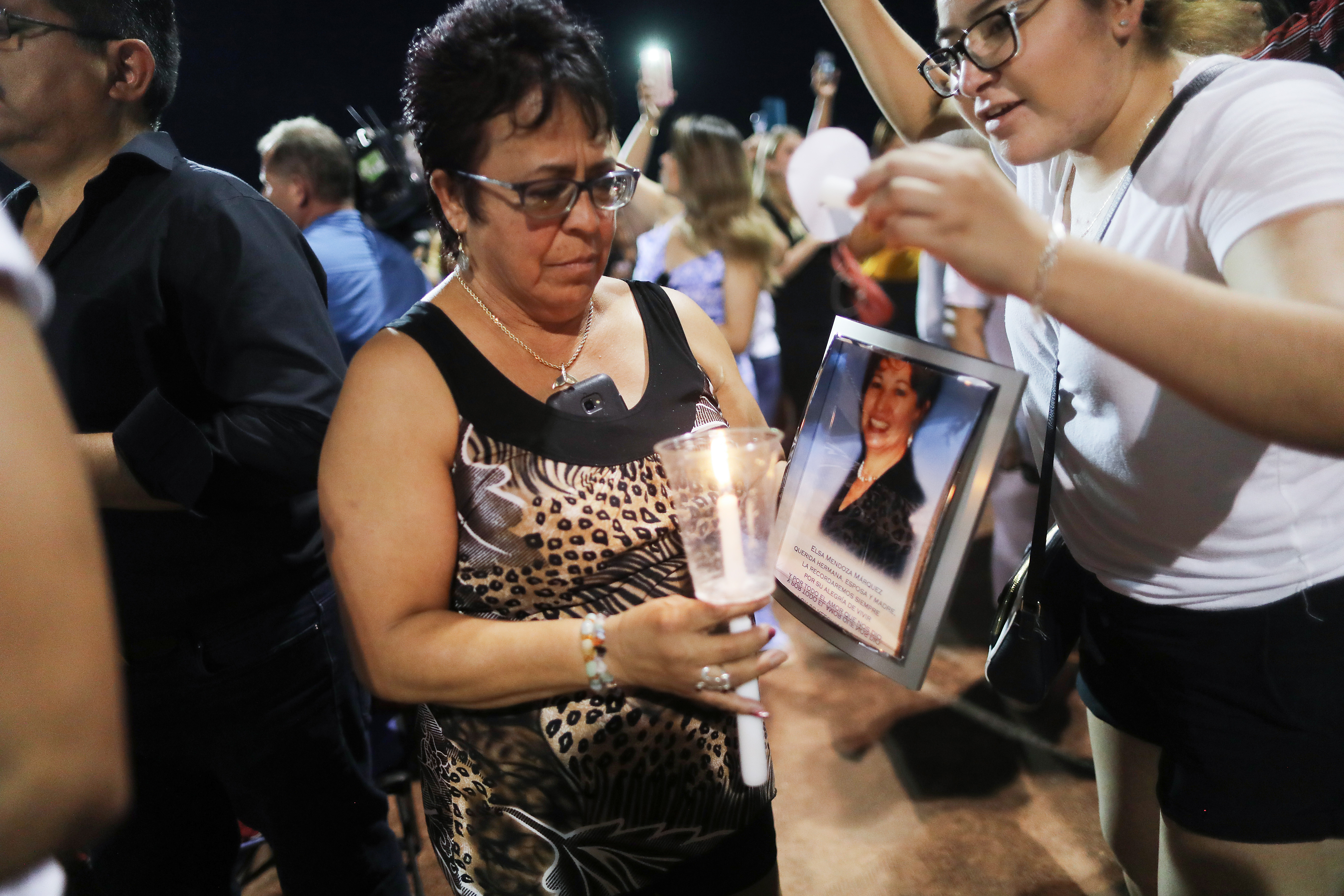 Who is a domestic terrorist?

A resource guide released by DHS in April also warned that soft targets, like shopping centers, “may be vulnerable to attacks using simple tactics and readily available weapons.”

But only Congress can change the laws surrounding domestic terrorism, and Wiegmann alluded to the difficulty of any such action.

The departments charged with the various aspects of domestic terrorism have had to contend with the rise of domestic threats and have faced questioning on their response to it.

“”If there’s interest in the Congress in pursuing a domestic terrorism statute, we’re certainly open to having that discussion,” Wiegmann told the House Homeland Security Committee in May, but “designating domestic groups as domestic terrorist organizations and picking out particular groups that you say you disagree with their views and so forth is going to be highly problematic.”

In 2017, Daryl Johnson, a former senior analyst for domestic terrorism at DHS, wrote in The Washington Post about the backlash he received when he flagged warned of “the resurgence of right-wing extremist activity and associated violence” in the US in 2009.

“Unfortunately, the Department of Homeland Security caved to the political pressure: Work related to violent right-wing extremism was halted. Law enforcement training also stopped. My unit was disbanded. And, one-by-one, my team of analysts left for other employment,” Johnson wrote. “By 2010, there were no intelligence analysts at DHS working domestic terrorism threats.”

What can be done?

In the case of El Paso, authorities are investigating a racist, anti-immigrant screed that they believe was posted by a man who opened fire at a shopping center in the city on Saturday.

This administration has faced criticism over its handling of threats, and the funding put in place to combat them.

During a congressional hearing in May, acting DHS Secretary Kevin McAleenan fielded questions on numerous grants that help state and local law enforcement with terrorism prevention, as some lawmakers shared concerns about the anti-terrorism component of the department.

Democratic Rep. Dina Titus of Nevada recalled the Las Vegas shooting and asked about cuts to grants aimed at helping urban areas to, among other things, prevent, protect against, and recover from acts of terrorism.

McAleenan said such grants and partnerships with state and locals are “critical” to the department, adding, “We’re looking for shared responsibility, shared investments with communities around the country to maintain their capability, while we still have significant funding dedicated to” those grants.

The exchange was indicative of the issues raised over cutting funding designed to assist with counter-terrorism efforts, when it cut some organizations out of money for “countering violent extremism” grants — a move that took place under then-DHS Secretary John Kelly.

In 2017, the Trump administration rescinded a grant offer to Life After Hate, which the Obama administration told just before leaving office in January would receive $400,000 to expand its outreach and intervention services for former white supremacists and others in the “criminal underground.”

The Trump administration eventually doled out the countering violent extremism grants to its own list of organizations, which increased money given to local law enforcement agencies.

The future of the grant program is unclear. The fiscal year 2020 budget proposal for Homeland Security did not include funding for the grants, though it did include terrorism prevention, the retooled term for countering violent extremism.

The results of countering violent extremism programs have been difficult to measure and have also been criticized by advocates as unfair targeting of minority communities.

Earlier this year, McAleenan announced the establishment of a new office, aimed at preventing terrorism and “acts of targeted violence such as racially motivated violence.”

The new office, which rebranded and reorganized existing DHS programs, was created to “ensure that all forms of violence, regardless of the ideological motivation, are being addressed,” according to a DHS press release at the time.