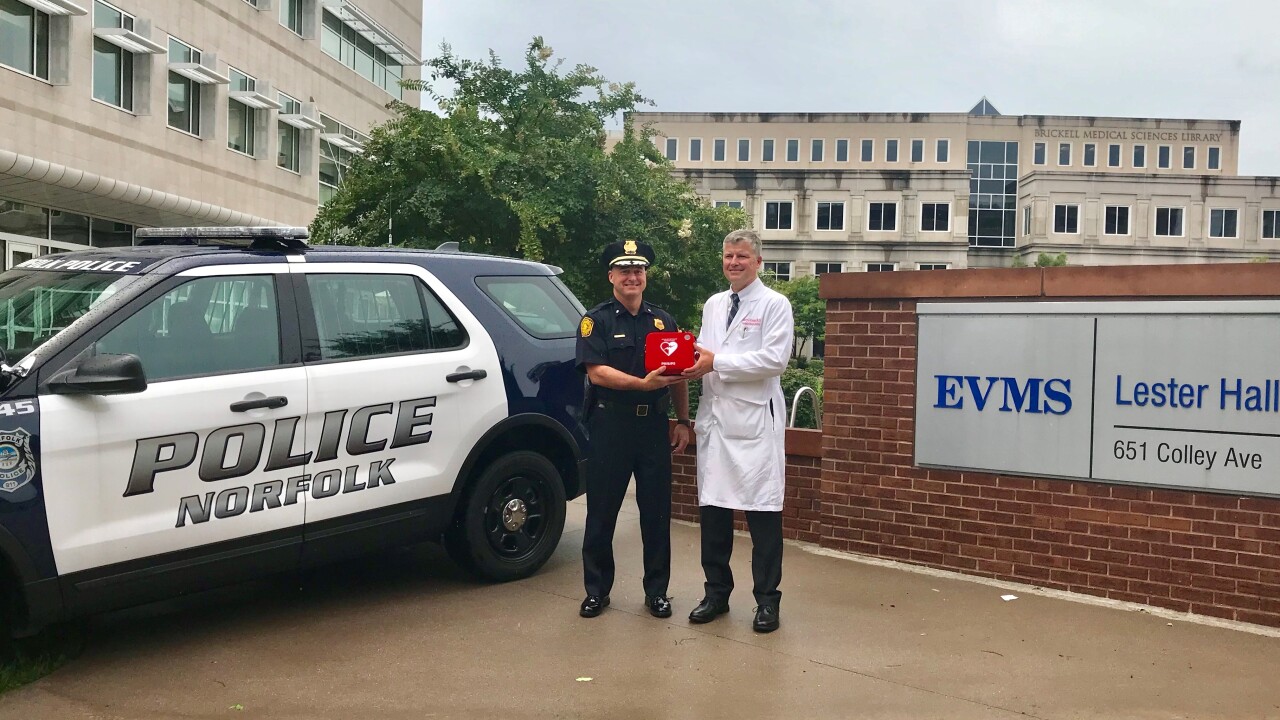 Starting Monday, 36 AEDs will hit the streets in patrol cars, thanks to a gift from the M. Foscue Brock Institute for Community and Global Health at Eastern Virginia Medical School.

Officers will now respond to certain cardiac arrest calls in partnership with Norfolk-Fire-Rescue to increase the chances of survival for a cardiac arrest victim.

Every year in the U.S., around 424,000 people suffer from cardiac arrests outside of the hospital, according to the data.

“Sudden cardiac arrest though is different from a heart attack- which is usually caused by blocked arteries,” says Barry Knapp, MD, Professor of Emergency Medicine and Director of the EVMS Emergency Medicine Residency Program. “During cardiac arrest, the heart short circuits causing it to beat ineffectively.  Patients become unconscious almost immediately.  Only a ‘reset’ from an electrical shock gives it a chance to resume beating. Combining bystander CPR along with early AED use, maximizes the chance for survival”.

AED’s have a built-in computer on the device that checks a victim’s heart rhythm through adhesive electrodes. The computer calculates whether defibrillation is needed. If it is, a recorded voice tells the officer to press the shock button on the AED.

The shock momentarily stuns the heart and stops all activity, which gives the heart the chance to resume beating effectively.

Instructions guide the officer through the process. AEDs advise a shock only for ventricular fibrillation or another life-threatening condition called pulseless ventricular tachycardia, the American Heart Association’s website states.

The Brock institute donated the AEDs to the police department, a gift estimated at $34,000.

“Equipping our officers with AEDs provides a significant safety net for those suffering from cardiac arrest, where seconds can be the difference between life and death,” said Deputy Chief of Police Joseph Clark.

AEDs make it possible for police officers to respond to cardiac arrest calls because they’re portable and easy to use. Even beach patrol officers will carry an AED while patrolling Norfolk’s 7 miles of shoreline during the summer months.

In addition to the deployment of AEDs, police officers receive bystander CPR training recommended by the American Heart Association.