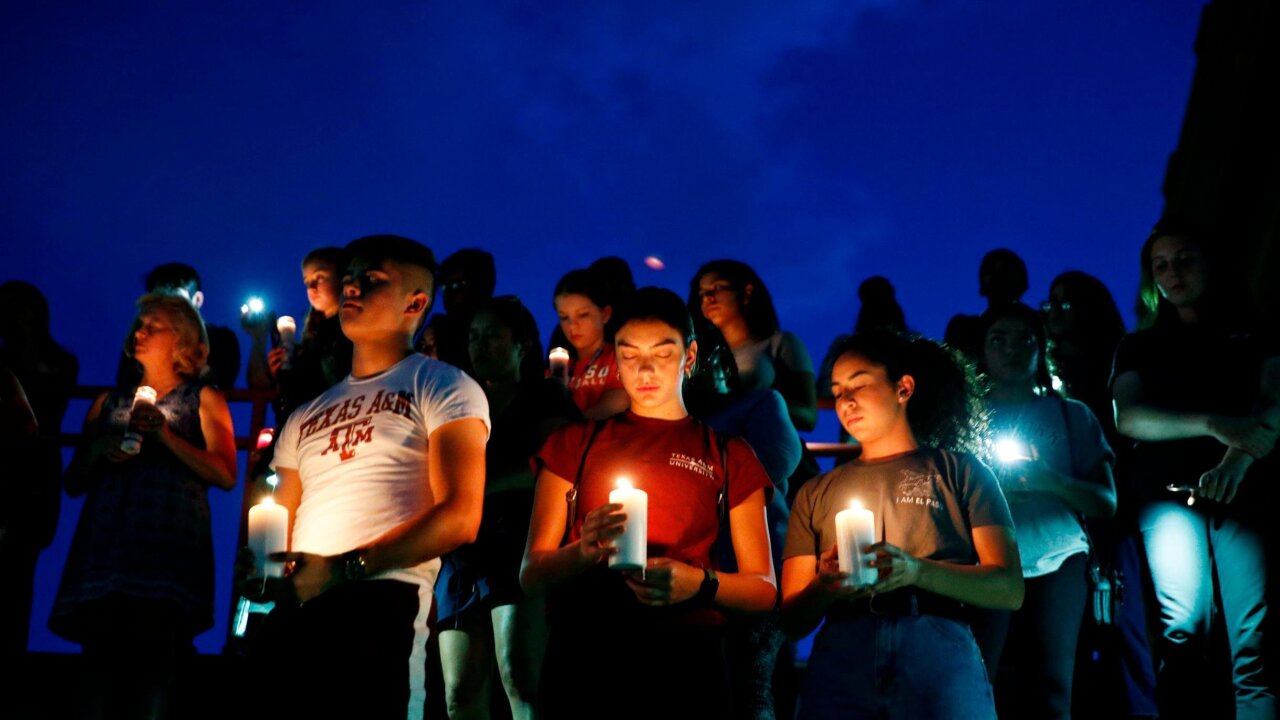 From left, Samuel Lerma, Arzetta Hodges and Desiree Quintanar attend a vigil for victims of the deadly shooting that occurred earlier in the day.

Federal authorities are treating the El Paso mass shooting as a case of domestic terrorism, the US Attorney for the Western District of Texas said Sunday.

The case appears to meet the statutory definition of domestic terrorism, Bash said. Saturday’s shooting at an El Paso Walmart — which left at least 20 people dead and 26 injured — “appears to be designed to intimidate a civilian population, to say the least,” he said.

“We’re going to do what we do to terrorists in this country, which is to deliver swift and certain justice,” Bash said.

The suspect was charged Sunday with capital murder and was being held on no bond, El Paso Police Sgt. Robert Gomez told reporters Sunday evening. The suspect has been cooperating with investigators, he said.

Authorities are investigating a racist, anti-immigrant document they believe was posted by a man who opened fire Saturday morning, shortly after 10:30 a.m. local time.

Authorities have not publicly identified the shooter, but three sources told CNN the suspect is 21-year-old Patrick Crusius of Allen, Texas. The sources were two federal officials and one state official.

Crusius’ grandparents released a statement Sunday that was read to reporters by a family spokesman who did not want to be named.

“We are devastated by the events of El Paso and pray for the victims of this tragedy. Patrick Crusius is our grandson. He lived with us in our house in Allen, Texas while he attended junior college at Collin County College. He moved out six weeks ago and spent a few nights here while we were out of town. His drivers license and mailing address were at our house in Allen — that connection has made us the focus of media,” the spokesman said, reading from the statement. “We are talking only to law enforcement agencies and will not be making further statements to the media. We request the media to honor our privacy.”

Authorities have not released the identities of the victims. Investigators are still in the process of identifying them and notifying next of kin, Gomez said.

All of the bodies have been removed from the Walmart and taken to the medical examiner’s office, he said.

The shooting was limited to the Walmart and the store’s parking lot, Gomez said, despite early reports that an incident had occurred at the nearby Cielo Vista Mall. 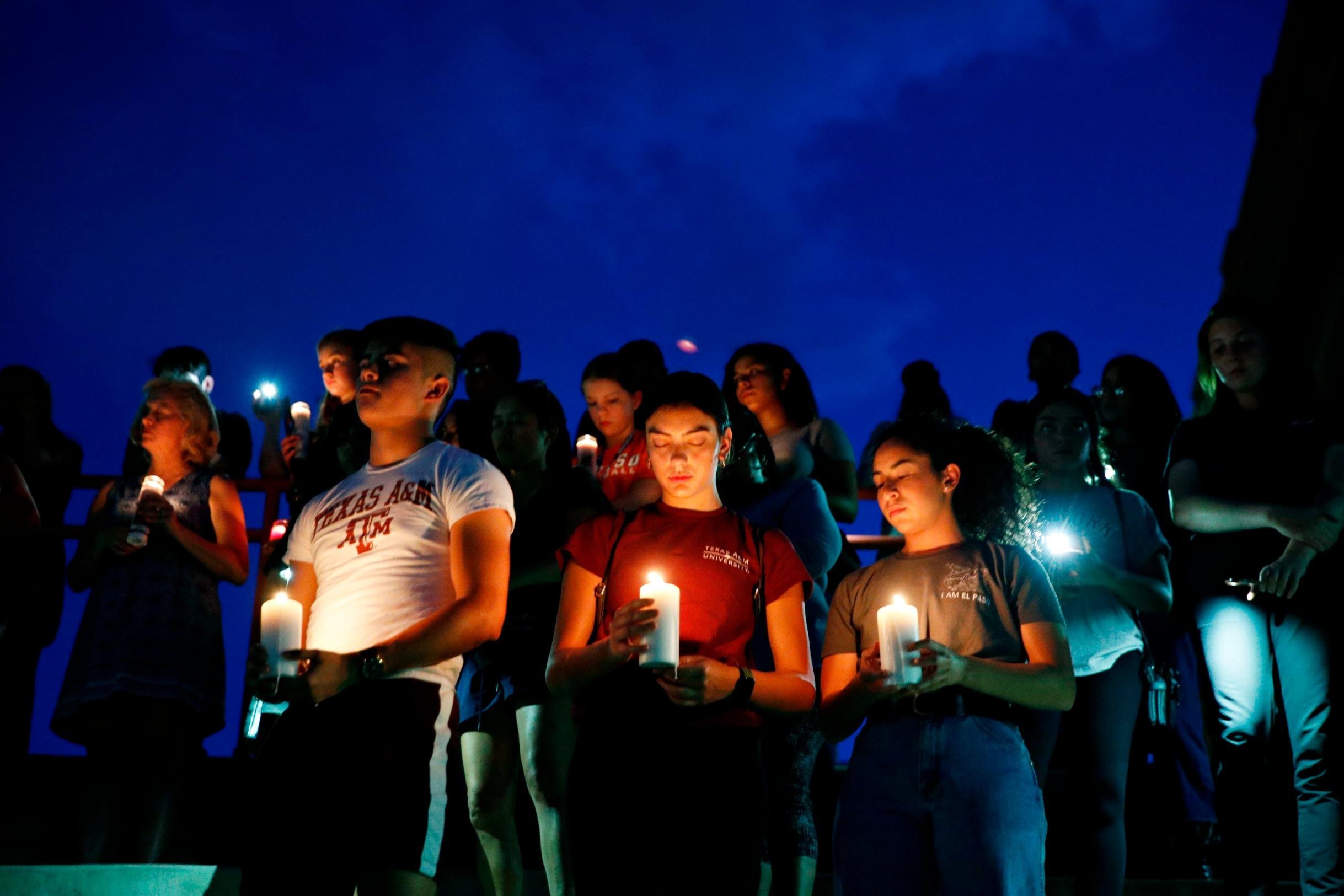 About 20 minutes before the shooting started, a post on the online message board 8chan believed to be from the suspect laid out a dark vision of America overrun by Hispanic immigrants. The 2,300-word document, which police called a “manifesto,” was attached to a post that said, “I’m probably going to die today.”

The writing is filled with white supremacist language and racist hatred aimed at immigrants and Latinos. It blames immigrants and first-generation Americans for taking away jobs.

The writer cited a fear that an influential Hispanic population in Texas would make the state a “Democratic stronghold.” But the writer also said “the Republican Party is also terrible” because the GOP is in his mind pro-corporation, which could lead to more immigration.

The writer of the document said they had held these beliefs for years before Donald Trump was elected President.

It took less than a month to plan the shooting, according to the four-page document.

The mass shooting happened in one of the largest and safest cities on the US-Mexico border, a place central to the Trump administration’s hardline stance on immigration and a city that state Rep. Cesar Blanco called “ground zero” of the administration’s family separations policy.

El Paso County had an estimated population of 840,000 people as of July 2018, according to the US Census Bureau. An estimated 83% were Hispanic or Latino.

Saturday’s shooting is at least the third atrocity this year where a shooting suspect is thought to have posted to 8chan in advance of an attack.

Before the mass shooting in Christchurch, New Zealand, in March, an account believed to belong to the gunman posted a link to an 87-page white nationalist manifesto on Twitter and 8chan.

And 73 minutes before the deadly shooting at Congregation Chabad synagogue in Poway, California, in April, someone identifying himself as the suspect in that attack posted a link to a hate-speech-filled manifesto hyperlinked on 8chan.

Fredrick Brennan, who created of 8chan but no longer owns it, spoke to CNN Sunday and said the problem with the website is “the current administrators are running it in a way that is indefensible.”

“If it’s going to keep on like this it should be shut down,” Brennan said. “I don’t want to pile on but they are not doing anything to solve this. They should at least shut down the board for a week or a month after something like this. They are letting their users incite violence.”

A week bookended by shootings

The El Paso shooting was one of several that happened across the country over the last eight days. It was followed just 13 hours later by another mass shooting in Dayton, Ohio.

At least nine people were killed and at least 26 were injured in a popular nightclub district by a lone gunman, identified as 24-year-old Connor Betts. Dayton Police said the suspect is dead.

And gunfire erupted Tuesday at another neighborhood Walmart in Mississippi, killing two employees and wounding a police officer. At least 34 people were left dead across all four scenes.

The National Rifle Association (NRA) released a statement on Twitter Sunday expressing condolences to the families affected by the shootings in Texas and Ohio and saluting first responders.

“The NRA is committed to the safe and lawful use of firearms by those exercising their Second Amendment freedoms. We will not participate in the politicizing of these tragedies but, as always, we will work in good faith to pursue real solutions that protect us all from people who commit these horrific acts,” the statement read.

The first call of an active shooter in El Paso went out at 10:39 a.m. local time, El Paso Police Chief Greg Allen said. The first officer arrived on scene at the Walmart near the Cielo Vista Mall six minutes later.

Adria Gonzalez was walking by the meat section on a Saturday morning shopping trip with her mom when she heard the shots.

She said she stepped up to see what was happening and that’s when she saw the shooter near the main entrance, wearing headphones or earmuffs and carrying a gun.

“I could only think about getting my mom and others out of the store,” she said. “We gotta get out of here.”

After she saw the shooter, Gonzalez said she saw a grade-school aged boy get shot in the leg, a man bleeding on the floor and another man, covered in blood, reaching for a nearby child.

She and her mother took off — along with about 40 other people, Gonzalez said. They waited in a storage area of the store until they no longer heard the gunfire.

“You see this happening in the movies, but when you live it yourself, when you see a person killing, the blood everywhere, you are in shock,” she said.

‘I never knew there was an odor to blood’

While authorities have not identified the victims, one was identified by her aunt as Jordan Anchondo.

Anchondo was shopping for school supplies at Walmart when the shooting started, Elizabeth Terry told CNN. Anchondo was shot while using her body to protect her 2-month-old son from gunfire, Terry said.

The mother of three died alone at the hospital because the family didn’t know where to find her, Terry said.

“How do parents go school shopping and then die shielding their baby from bullets?” she said.

Of the 20 killed, six were Mexican nationals, President Andrés Manuel López Obrador said. Of those injured, seven were Mexican, he said.

The shooting was “a terrorist act” against the Mexican community in the United States, Secretary of Foreign Affairs Marcelo Ebrard said Sunday at a press conference in Mexico City. He said his government was looking into the possibility of pursuing legal action.

The government will see whether there is enough evidence to solicit the extradition of the suspect to Mexico, he said.

Officials from two local hospitals said they had received at least 24 of the victims. One of the 13 victims taken to University Medical center of El Paso died, spokesman Ryan Mielke told CNN Saturday. Eleven victims, ranging in age from 35 to 82, were taken to Del Sol Medical Center, Dr. Stephen Flaherty said.

“The ages and genders of all these people injured and killed are numerous in the age groups,” Allen, the police chief, said Saturday. “The situation, needless to say, is a horrific one.”

The next day, when asked why he used the word “horrific” to describe the scene, Allen told reporters, “There’s not words you can place to say something like that. You have to see it for yourself.”

“When I first got to this job,” he said, “I never knew there was an odor to blood, but there is … I can’t tell you what it means … It will leave an impression that you’ll never forget.”

El Pasoans showed up in force this weekend to demonstrate their determination to rise above the shooting.

A makeshift memorial began to grow Sunday outside the Walmart, where residents like 62-year-old Alfredo Angcayan dropped off bouquets of flowers. He told CNN he wanted to support his community.

Gabriel Gonzalez, 21, and his friends raised money Saturday night and went to another Walmart to buy as much water as they could. They filled up the bed of a pickup truck and spent Sunday driving around the city, handing the water out to law enforcement, residents, reporters and anyone else who needed it.

“We are not detectives,” Gonzalez said. “We cant investigate the crime scene, but we can do this.”

Anahi Holguín rode around with Gonzalez and another friend in the truck. She said she needed to help somehow.

“El Paso is just love,” said Holguín, 21. “We can see somebody right here and say hi and we can start being friends in minutes, in seconds. That’s why we’re out here. We could be helping.”